Matwork drills for when you don't have a badger

I locked her in a closet with a badger.

That is the lie I have decided I am going to start telling people when they ask me what I did to teach Ronda when she was starting judo.


If you've ever watched Ronda compete, whether it is in judo or mixed martial arts, you'll notice one thing about her - she's sudden. Often at clinics, like at the California Judo, Inc. winter camp this week, I'll show drills I had her do when she was young and I get one of two reactions.


I thought about making up some incredibly complicated move where I fake right, then left, then do a little two-step dance backwards and forwards, slip behind the opponent and tie their arms behind their back with their own belt. The badger story sounds better, though. Plus it requires less work from me.

If you don't buy the badger or dinosaur story, read on ...

Did you ever see a situation where one player is on his back, maybe he just got thrown, or the other player managed to turn him over, and just at the last second, the player on the bottom turns out and escapes? Did you ever think that maybe the other player practiced for just that situation? Here is a drill I like for all levels from young kids to black belts.

Step 1: Start with the player on the top as close as possible to the bottom player, without yet touching. Notice that the blue player, Ana, a former successful international competitor, when given a choice, chose to start in position for an upper four corner hold. This position puts her at an advantage. Less experienced players will probably start from the side. 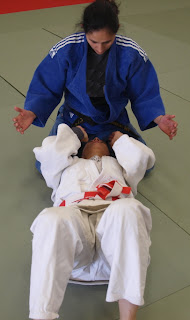 Step 2: When the coach calls “Go!” the players have ten seconds to either get the pin or escape. In the position above, the best choice for the bottom player is an inside turn. That is, to turn in toward the opponent. Notice that the player in blue (Ana) has grabbed under the uniform of the arm pulling away from her. She has to switch her momentum from going straight forward and down to the mat to pulling her opponent back . It’s already too late. The bottom player continues her roll to the stomach and escapes. 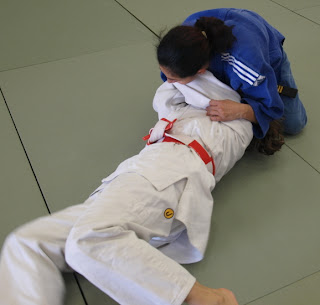 Variation 1: Same drill from the side
We do variations on this drill, sometimes with the player at the top as shown above, and other times with the player at the side, as shown below. This is a more common position, where the bottom player has just been thrown, or the top player has passed the guard. Again, the drill begins with the top player very close but not yet touching the bottom player. 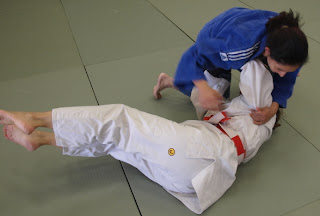 Notice that with the blue player at the side, if the white player on the bottom (that's me!) had turned away, she would be more likely to be pinned, as the blue player could pull back with her left hand, where she has grabbed under the left arm and pull the opponent to her back. Also, if the white player had turned away, she would be more at risk of an arm bar on her right arm, as blue could easily trap that arm, throw a leg over and sit back for the arm bar.

The drill is only ten seconds, then the players switch positions.  The reason for only giving ten seconds is to force both players to react quickly to take advantage of an opportunity to win or to escape. In a large group, do this drill once, with each player taking a turn on the back, and then switch partners. With a smaller group, when there are only a few partners of the same size, you may want to do this drill several times with the same person before switching.

A very bright young 11-year-old asked me if I remembered that I had taught this same drill at the 2009 CJI Winter Camp. No. I'm amazed HE remembers what I taught two years ago.  Good for him.

I do use this drill a lot because you can practice this situation several times in just a few minutes. It's also good for learning to get out of a dangerous position.


What I like most about it though is that it is good for developing a feel for mat work, which is THE key to being successful on the mat.  After turning away from the opponent and getting pinned several times, gradually the player will get into the habit of turning toward the inside. At the same time, the top player should get the habit of catching the arm and arm barring any player that turns away, or find it easy to pull the player into a pin.

It's a drill that teaches players to react in a situation, without stopping to think. To be sudden.

Sounds like some great advice. Now if only I didn't feel like such a goon doing solo drills while standing around idle at work...

Well, matwork drills are a lot easier if you have a partner. Anyone with a body will do. Aren't there other bored people at your job?