Remember our transition drill from standing to matwork that I rambled on about in the last two posts? Here is Plan B.

The purpose of a situation drill is to have a FEW techniques that you have practiced so often from a given situation that when it happens in competition you react automatically. In this drill, the situation is a fairly common transition from standing to matwork. The blue player attacked and missed a throw. 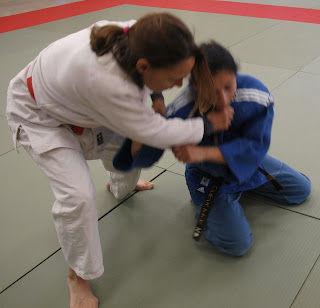 Step 1: The very first thing you do is make it very clear to the referee that you stopped the throw. I have seen many times in tournaments where the white player in the photo above (not me!) would go around behind the blue player to apply the choke. Blue continues the throw, the white player gets thrown and has only himself/ herself to blame. In the picture below, the standing player jerks the opponent down and the blue player puts her hand out to stop herself from going face first into the mat. Notice that, just as in the previous technique, the standing player has her right hand on the opponent's lapel. THIS HAND DOES NOT MOVE. 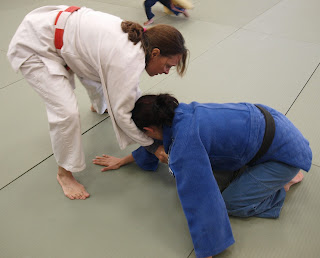 These next few steps should happen in one or two seconds, but we have slowed them down here to show you.

Step 2:  Move to the side of the player on the ground. 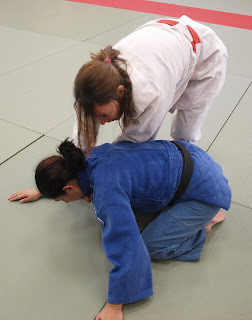 Step 3: Pull up with your right hand, to make it difficult for the player to flatten out, and slide your left hand under the opponent's left arm. At the same time, throw your left leg across the opponent's stomach. 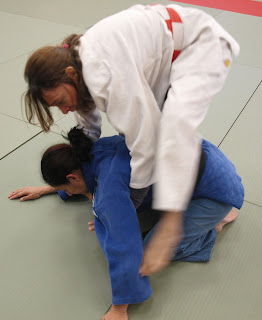 Step 4: Roll hard to your left  side. As mentioned in the previous technique, this is a move where your momentum carries you through the roll and your opponent with you. 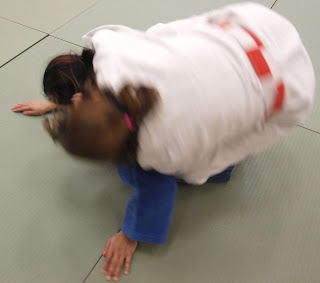 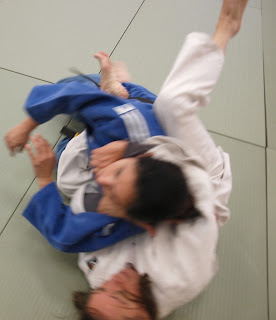 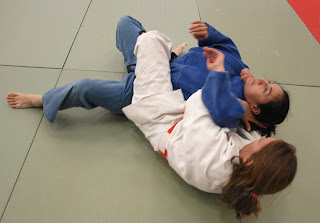 Personally, this choke is not my preferred style because, unlike the previous choke, there is no natural transition from here into another technique.

When Ronda was little I tried to teach her the diving roll over choke I did and no matter how many times I tried to teach her, she just couldn't get it right. So, I came up with this move, Plan B. This illustrates an important lesson, by the way. The point of judo isn't to slavishly imitate your instructor or your favorite world champion. The point is to win. If in doing a drill like this standing transition drill you find there are certain techniques that don't work for you, discard those and try something that feels more natural.

Thanks for the Plan B. Great Stuff! Love the comment about making judo your own. Most people think that if you don't do a perfect uchimata but still get ippon, that's not good judo!