Me & Jim Discuss Variations of The British Strangle

"I looked at that choking technique you showed on your blog and I think you're doing it wrong."
"What the hell do you mean I'm doing it wrong? I made that technique up. How can I be doing a technique wrong that I made up? That doesn't even make sense. That is like me saying that my favorite color is red and you saying no, it isn't."
"You didn't make that technique up. It's been around since the 1980s, maybe before."
"Oh, yeah, well I've been around since before the 1980s. Besides, if it's not the same technique, maybe I did make it up. Maybe whoever did it copied it from me."
"Well, I'm telling you that I looked at your blog on my iPad and I think what you are doing is a variation of the British strangle. Look it up British strangle on youtube and you will see what I mean." 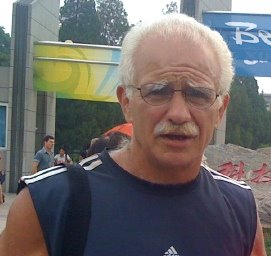 First of all Jim Pedro, Sr. used to be the least technologically involved person I know, so when he said that last statement I almost asked him, who are you and what are you doing in Jim's body.  It seems there are advantages and disadvantages to having my co-author become a lot more Internet savvy. The chief advantage is that we can get work done a lot more easily. This is a huge advantage because we signed a contract with Black Belt and our book is expected to be in their fall catalog.

The disadvantage is that now he is aware of it when I talk smack about him on my blog (not that it will stop me).

So, I did look up the British strangle and found a bunch of videos on youtube including this one with Nicholas Gill.

Jim says we need to call the section in the book where I discuss the two chokes in the last couple of blogs "variations on the British strangle".  Fine!

Actually, although I give Jim a hard time for a hobby, I have no problem believing that someone came up with that choke before me. It wouldn't be the first time. When I was a teenager, I was very, very excited about this choke that I had made up. I showed it to my coach and he said,

"Yeah, that's the one Klaus Glahn, the 1972 Olympic silver medalist beats everyone with."


In fact, you can find the choke in the Tap Out Textbook under Glahn's name.

As far as the British strangle, yes, I had seen it before. No, that is not what I was trying to do and doing it wrong. I actually prefer my way of doing it. I'm not saying that Nicholas Gill and Jimmy Pedro, Jr. and anyone else who does it that way is doing it wrong either. It's just a different technique, like seoi toshi isn't a wrong way of doing tai otoshi.

Jim would argue that no, it's a variation and that makes him right.

Hmph.  Whose ideas was it to buy him an iPad for Christmas?
Posted by Dr. AnnMaria at 1:07 AM

Are you sure Jim isn't messing with you?

The blog where you show the choke actually ends with the line: "If in doing a drill like this standing transition drill you find there are certain techniques that don't work for you, discard those and try something that feels more natural."

To then say you are doing the move wrong is hilarious! Well done Jim, she fell it, hook, line, & sinker.

Have to agree that it looks significantly different from the British strangle. What it *does* look like though is kataha jime, albeit a variation with a rolling entry.

Are you kidding? He is always messing with me. I think it keeps us blood pressure frm getting too low. Yes, it is a rolling entry to an old choke

Yours does look different from the British strangle. Though I'm not sure of the origin of the name or who did the choke first, Gill's British strangle is the same as a Bow and Arrow choke from BJJ.

Ha I found both you and grumpy. As always I get to play referee. Jim is right! Live with it.

LC -
No way do you get to referee! That's your beer-drinking buddy. I call conflict of interest!

Yea we only drink wine together.

I said the same thing when I heard he was getting an iPad for Christmas... of course now I just have to check his emails for him and set up his youtube.

"Kayler, I can't get this gawd damned youtube machine on my iPad."
"Thats because you're not on the youtube app Big Jim."
"What the Christ in as app?!"