It Only Seems Like the Only Thing in the World

I was working on our latest game, Fish Lake, when I noticed a tweet that mentioned my name.

Today in 1984 in Vienna @DrAnnMaria Burns became the 1st USA world champion ever. Burns is mother of 2008 Olympic medalist @RondaRousey


It's funny, at the time, winning seemed like the most important thing in the world. Don't get me wrong - it was great and worth everything I had to do to get there - but life goes on. As Wendy said to Peter Pan when he came back for her - "I'm ever so much more than twenty now."

It just served to remind me again that the world is big and time is long. What seems like the only thing in the world at one point is going to be just a fond memory years from now.

I think it is great that I didn't remember what I was doing 29 years ago because I was too absorbed in what I was doing today. Life has gone on in a happy way. Not only am I Ronda's mother, but my youngest daughter, Julia, was home for three days so we had to do important things like go to the Farmer's Market, sit outside at a nice French cafe and have brunch, shop at Bloomingdale's with Dad's credit card.

When we're young and competing, it's easy to think that winning (or losing) at the world championships is going to be the best (or worst) day of our lives.

We ought to have the wisdom of my little granddaughter, who, when we went to Disneyland this year kept saying, 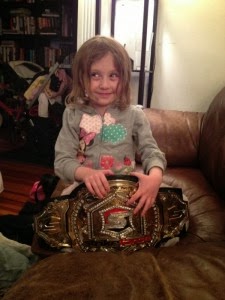 This is the best day of my life - so far!

This, I'll have to disagree with to an extent. While it's good to learn how to remain in the moment, keep in mind that everyone is in a race with time to find out what kind of life they want and to go after it. Some of us have had more challenges than others, but a higher purpose that their environment and circumstances always seem to resist. To simply ignore that and live in the moment can mean forfeiting yourself over to that.

I believe that remaining in the moment should be something that you should be able to choose to do and looking at the past and future should also be a choice. It's when we get absorbed in any single mode of thought and get stuck there that we limit ourselves. This applies more when looking in the past or future than it does while remaining in the moment, there's no arguing that. However, by remaining in the moment you could forget or overlook important details because your mind is one-track. Also, you can combine more than one approach. You can look into the future for planning and remain in the moment as you're acting on that plan after you have it formulated and tweaked (if needed).