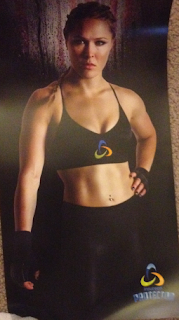 I guess with all of the missing weight going on with The Ultimate Fighter show maybe it's timely to be talking about the free rice contest again.

In a nutshell, around two years ago, when Ronda was cutting weight for a title fight, she came across the Free Rice site (I think maybe her youngest sister was assigned to do it for school). She had been complaining about being hungry and then sat up and said,

"How much would it suck to be hungry every day?!"

So, the free rice contest started. Each time she makes weight, from training camp until the weigh-in, people can play as part of a group. It is free to play. Each time you answer a question correctly, an advertiser donates 10 grains of rice. So far, there have been 16 people donate 1,000,000 grains each. Pretty amazing, huh?

The top people get prizes. ALL the money goes to the World Food Programme. The prizes are donated and my company, The Julia Group, takes care of the shipping.

According to Jessica at Armbar Nation, who keeps track of these things,


Last time, when people asked could they donate money instead of donating rice on the site, we said no, just to give the people who did not have a lot of money a chance to win. (Yes, Jim Pedro, Sr. used to call me a Communist all of the time.)

However, this time around, there are two differences. One, is that there is a great and pressing need for supporting the World Food Programme with 2.5 million people in the Phillipines in need of emergency food assistance due to the super-typhoon.

The second is that we have a lot more prizes thanks to the generosity of the folks from Insureon and Xyience, two of Ronda's sponsors who provided stacks of posters. The Insureon poster is above and the Xyience one is below. 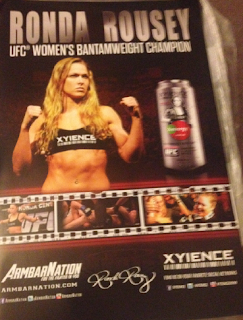 Here is how to help people, and win prizes:
1. Join the Ronda Rousey Team Free Rice group and play. Make sure you are playing for the group. We'll send prizes to the top five every week, the top ten at the end of the contest and to another ten we pick randomly at the end. (You can only win a weekly prize once, but the top ten at the end will all get prizes, as will anyone who donates over a million grains.)

2. Donate $500 or more to help with super-typhoon relief. You can donate using a credit card or Paypal at the World Food Programme site. Take a screen shot or print to pdf the page that says Thank you, Your donation of $500 has been received and email it to teamrousey@rondarousey.net

3. Send a check for $500 or more to St. John the Baptist Church, with the memo Super Typhoon Haiyan Relief. The address is 3883 Baldwin Park Blvd., Baldwin Park, CA, 91706  They will send me your mailing information. You don't need to do anything else.

Why $500? Because Ronda is training every waking moment and she gets far more requests for autographs than she could possibly respond to. No, there isn't any assistant or stamp or machine that signs them (although it has been suggested many times). So, she agreed to sign 100 posters that could be used to raise money for charity and that is what we have and we are trying to raise as much money as possible while still allowing her time to train.

For people who do win prizes - they will be mailed out every week, on Tuesday, so if it takes a week or two, don't panic.

For past fights, the group has been "reset" or otherwise restarted. Has the latest version of the Team Rousey Free Rice group been activated yet?

The latest group can be found right here. Thank you for asking.

Your daughter is an amazing person thanks for raising her so well. she is an inspirational role model and I am proud to be a fan of hers and yours as well

Is it really only 16 people who've hit the one million mark? I've hit it twice, myself, over Ronda's last two fights. ;)

Yes, it is true. So I guess that makes you doubly amazing