Avoid the people mother warned you about

My friend, Dr. Jacob Flores, is certified in geriatrics. Thus, he gets to see many people at the end of their lives. When I commented that I didn't want to regret on my deathbed that I hadn't accomplished something or other, he cut me off.

Maybe you will regret that on your deathbed but guess what, even if you do, that's one day out of your entire life. Why compromise the other 30,000 for that one day?


Jake is a brilliant guy and he regularly says things like that. I advise you to hang out with smart people because it's contagious.

No, I'm serious, because they will talk about intelligent ideas and make you think. They'll use words or expressions you don't know and increase your vocabulary. They'll forward articles to you, recommend books they have read, lectures they attended or watched online. Hang around with smart people and you get smarter.

Some of my friends from when I was young have spent the past thirty years or so hanging out with the dumbest people on the block, and it shows. If I mention a new operating system or, really, anything other than going to the gym or drinking, they'll laugh and say,

Oh, I don't know anything about that shit!


When we were in school, these were really smart people, and I think to myself,

When did you start to think it was okay to not know things, to be ignorant? You weren't always like that, I'm sure of it.


Maybe not everything you do is influenced by the people around you, but much of it is - exercise, honesty, work ethic, drinking.

If most of your friends are not working full time, crashing at someone's house, working a few days here and there, getting money from their parents, borrowing everything from cars to cash, you see that as an acceptable lifestyle.

The pernicious part is that you don't see the effects as they are happening. You're working hard at a real job. If you take off for a "mental health" day or two a month, no big deal. Everybody does it. You're still working harder than anyone you know.

The fact, though, is that NOT everyone does it - whether "it" is playing hooky, lying on an application, forging someone's signature on a document, cheating on your wife or drinking six beers a night.

Not only are your friends your standard of comparison, but they are also your partners, for good or evil.

Even Batman had Robin.

I'm pretty sure I wrote that in a chapter in a book once. (Thought I was kidding, didn't you?)

The point is, your friends can recommend you for a job opening, come by to give you a ride to the gym with them, help you with your Calculus homework or bring over the beer. 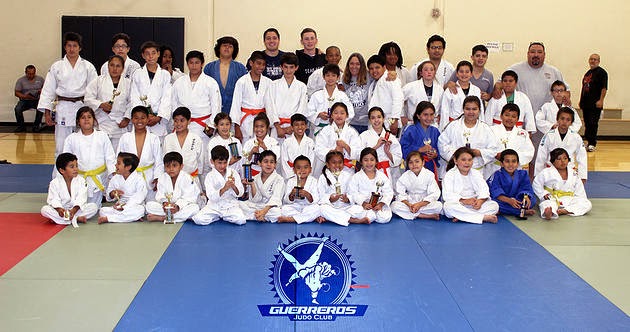 This weekend, I was with the Gompers Judo team for a judo weekend - a two-hour seminar at Millenia MMA on Friday followed by  an inter-club tournament sponsored by Guerreros Judo on Saturday.

The students on the Gompers team look out for one another. They're kind to each other. If a student forgets his backpack or his homework, someone else gets it for him. They offer to help each other with schoolwork, cheer for each other and encourage each other to go to practice.

At an adult level - the other volunteers at Gompers (Jose Gonzalez, Will Beane and Jimmy Sanchez) and I all have a shared commitment to making this a good experience for the kids - as do Gary Moore from High Desert Judo, Eric and Frank Sanchez from Guerreros, Gary Butts from Millenia and Victor Ortiz from Team Ortiz, all of whom helped with this weekend event.  None of them think it is okay to focus on that one kid who might have a 1% chance of making an Olympic team and ignore the rest.

Also, they are all great people. Let's pick out Eric Sanchez, for example. He's a nice guy. I even buy my insurance from him. I've known him since he was born. Let's say, though, that every person but him at the tournament was a jerk, someone I thought would be mean to my kids, referees who would cheat in the matches - then I wouldn't go and he would be deprived of the value of my presence, such as it is. (-;

Good people attract other good people to associate with you. On the other hand, the rude, unethical jerks drive people away and if that's who you insist on hanging around with, pretty soon that will be your only company.

My point is -- when good old mom warns you about hanging around with certain people, she's probably right.

Sounds good. I will check it out. Thanks for the recommendation. See what I mean (-;

On a completely unrelated note....
I know you are immensely proud of your daughters magnanimous gestures with regard to world hunger because these things are what really matter but...
do I see a bit of a smile forming as you watch her decked out in a designer ensemble, walking shoulder to shoulder with Stallone while thoughts of her in 2009 dance in your head??
So, so happy for all of you!!

Her life story is the stuff that good movie scripts are made of...
Seriously!!

One more thing, Mrs. D....and I would like your honest opinion on this.
Do you believe Kayla Harrison will make the jump to MMA sometime in the future?

I don't see Kayla making a jump to MMA. There is no weight division in the UFC for her and she has said she is going to compete in 2016 in judo.

Thought provoking and smart as usual.

There is a think to be said for reading smart people's blogs too.