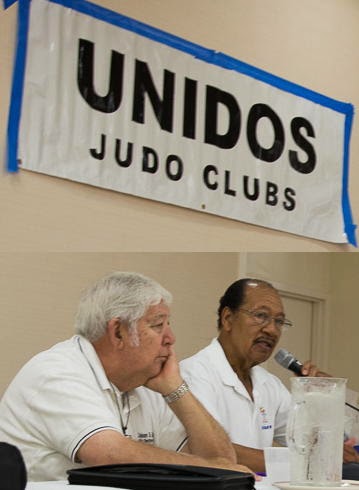 I knew Jesse Jones for more than half of my life. We met when I was 23 years old and just moved to San Diego. He refereed my matches, coached my competitors and 25 years later when my children were competing, he was refereeing their matches and running national championships in which they competed.

He was the tournament director for the first junior nationals Ronda ever won - she was 12 years old.

If you never knew Jesse, you missed out. He was a gentleman, a marine, a successful businessman and loved his family. He was the kind of guy you'd like on your team and as a next door neighbor.

We people use the term, "Pillar of the Community", I think of Jesse, particularly when it comes to the judo community. Here is just a little bit to give you an idea of the kind of man and judoka he was.

Participated in the 1968 All-Marine Judo Championships

Below, courtesy of Jerry Hays, are some words about his passing from judoka around the United States.

Thanks for letting us know.  Many never met Jesse and I really don't know him that well but he was a fellow judoka.  I wish his family well, plz pass on our condolences from the Alamo Judo Family.

From Dr. Jack and Judy Hegenauer

Thanks for notifying us about Jesse.  I’m really sorry about that.  Jesse was a fine man, and a tireless worker.

Sad to hear this news.  He made a major and prolonged contribution to American Judo.

He was the one and only one that helped me get my Dojo started.  He set up the business deal for me on my first purchase of tatami mats too.   Great guy.   A real Sensei.

First, we have lost a very important man in the sport of American Judo.
I send my condolence and prayers to his family.
May Jesse rest in peace.

So sorry to hear of Jesse's passing. The ranks are thinning. God bless you all.

Last, but not least, from his fellow Marine

Please convey our condolences directly to Jesse Jones' Family from The Mayfields. He is already missed.