Answers to Personal Questions: Ask Me Anything

While I'm not cool enough for a reddit ask me anything, I do get a lot of the same questions from people over and over. So, I thought I would knock them out here.

Why haven't you been blogging or on social media much lately?

It has been a while, hasn't it? I was sick for about two weeks. Not deathly ill but sick enough that I stayed in bed for a few days, and even when I got back to work, I was only working six or eight hours a day and sleeping the rest of the time. Once I wasn't in bed half the time, I had a backlog of actual work to do. Today is really the first day I have felt 100% my usual self.

What's the story behind Ronda selling her Honda?

Last year, Ronda gave the car to Julia for her 16th birthday. It turned out to need new tires, work on the electrical system, all of which we (good old Mom and Dad) paid to have done.  Because Julia drives 150 miles round trip every weekend to come home (she attends boarding school), it's very important to us that she have a reliable car. When at the last maintenance check the mechanic said it was going to need a new transmission eventually, we decided to give her our old car instead, which is five years old, and sell the Honda.

Why didn't you just keep the car?

We live in the city. It's hard enough to find parking for two cars, much less three. Dennis works in an office at home and I'm out of town half the time meeting with clients, funding agencies, schools that use our games or speaking at conferences. We don't need three cars.

Why not just give the money to charity?

Because Dennis spent $3,000 fixing the car, he thought it would be nice if he got it back if we sold the car. So we listed the car on ebay for $3,000. Julia is 17 years old and in high school. It's her car. The bidding is pretty high for the car now and I intend to strongly encourage her to give some of the money to charity but it has to be her decision. Any money she keeps is going to a) Soccer camps and b) saving for college tuition. 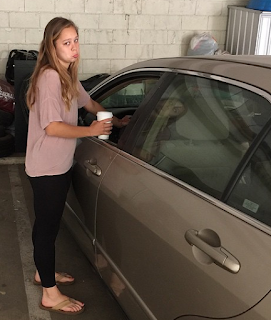 Why didn't Ronda's sister clean out the car?

I seriously wonder what kind of people ask this question. What were they like as teenagers? I've never known any teenager to clean up anything voluntarily.

When we got the car, I took a bunch of stuff out of it - gloves from Ronda's first pro fight, boxing gloves, wrestling shoes and God knows what else, because moms clean stuff. It's part of the job description. There was SO much stuff in there that I pretty much just said, "Screw it!" after I had cleared out most of the seats and the trunk, so Julia could bring her laundry home from school and fit her soccer stuff in it.  I missed some stuff under the seats, in the glove compartment and in whatever you call that compartment between the seats. So, sue me. Suzy Homemaker, I am not.

Are you teaching judo at all over the summer?

Not really. I'm catching up at work while Gompers Middle School is out for the summer. I know the students would like to have judo and I'd like to have the time to teach, but I just don't. I will be in Louisiana, June 19, teaching a seminar before the freestyle judo nationals, but other than that, I'm doubling down on game development until school starts back up again in August.

Do you ever stop working? 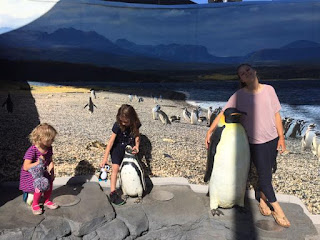 Actually, I try to take off 1 day a week, usually Tuesday or Wednesday. It's crowded in Santa Monica on the weekend, so I'd just as soon work. On the other hand, everything from Disneyland to the Aquarium of the Pacific to traffic to San Diego is less crowded in the middle of the week.

Why don't you blog more about judo?