Awesomeness ! Look How Far We Have Come

I'm writing this from a seat in first class on a flight en route to Chicago. I like flying first class but not enough to pay extra for it since, as The Perfect Jennifer tells me often, I am just a couple inches over the height to be qualified as a "midget". The extra leg room really isn't necessary. The free Chardonnay they keep coming by with is appreciated, though. (So, you will understand if this post has some spelling errors.)

I'm being inducted into the International Sports Hall of Fame this weekend, which, I must admit is pretty cool.

I'm really flattered that some people went out of their way to nominate me for the hall of fame and other people advocated for me to be inducted this year over the other, no doubt really deserving, nominees. To me, it is particularly cool because I grew up in that pre-Title IX era when women and girls were actively discouraged from participating in sports - particularly in combat sports like judo.

I have to admit, though, that I'm more excited to be spending the weekend with my not-so-little angel Julia than the Hall of Fame.  She is going off to college in less than six months, so any extra time we get to spend together is precious. She's on the flight an hour behind me since we did not get our act together in time to book her on this one. Julia is the one in the middle. 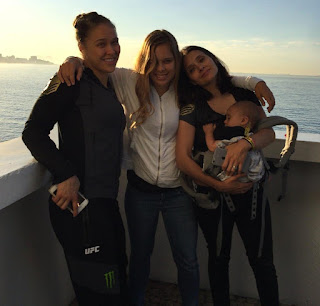 This is the third time I have been to the Arnold Sports Festival/ Expo/ Extravaganza. The first time, I was coaching. Ronda, Julia and my friend, Tina Thomas, were all competing in a judo tournament as part of the event.  Julia won the mini- me division and then fought an age division up and got second, and Ronda won her age group, the women's division at her weight and the women's division at the weight above hers. I think Tina got second or third which is more impressive if you know that Tina is blind and competed in the regular division.

The second time I went, Ronda was competing for the Strikeforce  world title in MMA.

Now, it's the third time and no one from our family is competing, unless Julia decides to jump into the soccer tournament on Saturday, which is kind of unlikely since she doesn't know anyone in Ohio.

I'm really looking forward to just checking things out with Julia. This event is HUGE and sports range from the Olympic (fencing, soccer) to the really? (pole fitness, I'm looking at you).

I'll post updates over the weekend of the cool stuff we see and do. Also, I have been informed that there are a couple of dinner / party things to which I am expected to wear a dress. That should be interesting.  Stay tuned.

---
I have a real job where I make adventure games that teach you stuff. 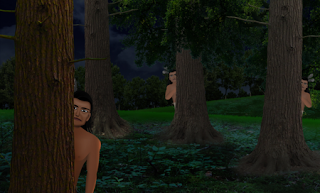 Congratulations, Dr. De Mars! That is so cool and well deserved, IMO. Thanks for once again sharing your thoughts on the other topics as well. I always enjoy reading your blog.