Last night, I was asked to introduce my daughter, Ronda, at the Erasing the Stigma awards.  A lot of people think they know Ronda, but there are a lot of things about her that they don't have any idea about.

One of those is that she does a lot for charity and you never hear her bring it up. She's supported several organizations for years, like Woodcraft Rangers  - which provides after-school programs and Didi Hirsch, which provides mental health services , donating money, holding events to raise more money and attending their events, doing everything from teaching judo to kids to helping with programs at fundraisers. 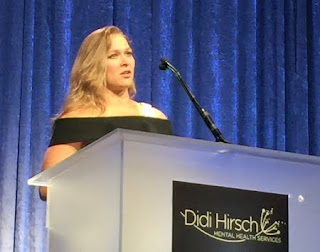 Last night, when she was at the Didi Hirsch fundraiser, I was asked to say a few words about her.  Here is what I had to say:

Often, in interviews, Ronda has said that she takes inspiration from her mom.

One of the advantages of getting old is that you may have the privilege to live long enough to take inspiration from your children, and today I wanted to talk about how Ronda inspires me.

You will one day experience joy that matches this pain

Ronda embodies that statement. I have seen her fail on a world stage at a very young age - the youngest person in the 2004 Olympics, coming home empty-handed - and using that as motivation to win the junior world championships, taking the gold medal in a match that was an amazing 4 seconds.

She struggled with a speech disorder, her father’s death and bulimia. When she started to gain some fame, she used that to draw attention to eating disorders, running a clinic, “Don’t Throw Up, Throw Down” to raise money for Didi Hirsch.

Some people told her that she should have called it something more proper and she refused, saying that is the reason people often don’t seek help, the reaction they get from society, “Ooh, that’s gross”

I run a startup. It’s a long, exhausting road with a lot of rejections and failed first - and second and third - attempts. Whenever I get discouraged and ready to quit, I take inspiration from Ronda.

Call it as you see it, accept that everyone has problems, has issues. Don’t be ashamed of yourself for not being perfect. Never give up - and one day your dreams will come true.


I love you, Ronda and I'm proud of you.

Absolutely beautiful. Ronda is lucky to have you. I hope she takes these words to heart like she did countless others you have said to her, so she can come back and kick some ass. She's forever an inspiration to me for overcoming apraxia, and for countless others in the community who have found hope in her. We all want to see her rise again!

That was amazing!!! And very very true!!! I have realised that sometimes people have to turn a negitive experience to a positive experience and by what I have learned from Ronda and her back story and all the things she has told the press and in her book she made the most of a failure into a success!! I would say that both Ronda and yourself (Dr.AnnMaria ) are truly blessed to have each other!!! And both of what you do is very inspiring to people all across the world including myself. I look at you (Dr. Ann Maria) and you inspire me to alway seek out my goals by how you have always wanted a startup company and you did exactly what your dreams were and that is amazing!!! As for Ronda she inspires me everyday and when I think of Ronda I think that of someone who has been through hell and back and still continued to fight for what she had wanted so badly and it inspires me to think that no matter what is going on in my life that is trying to tear me down if Ronda can do it and make it on top than so I can!!!! Thank you for what you do :) - kenzie (CLE)

Beautifully said. Not only is nobody perfect, but nobody finds their passion on the first attempt. Keep trying, and eventually you will find something that you can be great at. Something that excites you and gives you joy. Something that inspires others.

That was beautiful. It made me cry

That's a lovely way to be able to talk about your daughter - you should be proud. I bet she loved hearing it too, I don't think anyone ever gets too old to be told that they've made their parents happy.
I struggle with mental illness and have had days where just living is hard enough. Anything that contributes to a greater knowledge of these illnesses and more awareness and compassion for those whose lives are touched by it is a good thing, so kudos to Ronda for doing what she can

I agree that it is better to adopt a low profile in philanthropy. I remember being mad at this famous singer who would not stop bragging about being generous. The other day, I faced a strange situation where a loved one payed me for a service I thought was free amongst next of kin... I sent the money to a hospital in need of donations in Africa. Instantly relieved me of all that negative energy trapped inside me ...

That was so beautiful, one of the reason loved and Respect Ronda from the get go so real.

That speech made me cry,of happiness ;)

Pankration or fear the Greeks when they are angry ! If u want to be an expert în this sport you must read about Pankration Spartans Martial Arts...