Everything is different now - oh, wait, no it isn't 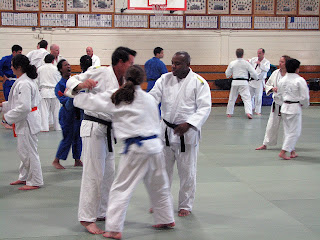 On a regular basis, I get told that judo is completely different now than when I was competing, that I may have been hard-core in my day but I know nothing about today's judo, etc. etc.

I get this from everyone from my older daughter (the little cute one is too young to know everything yet) to random people I have never met. This amuses me greatly since it is essentially people who were not born in "my day" telling me with authority what things were like back when I was competing. Unlike them, I was there when it happened. Jim Pedro, Sr. thinks I get offended or upset about this and he doesn't believe me when I tell him he is wrong. Of course, Jim NEVER believes he is wrong, but that is a different subject. Actually, I find it funny as hell, just like the time my oldest daughter (Ronda is the third daughter), was upset after a track meet and when I tried to talk to her she said,


"What do you know about winning and losing?"

Nothing. I know nothing.

So, what has changed and what hasn't? What still works and what doesn't?

Matwork has changed very little. I was watching a DVD tonight and I was very amused to see that the first drill was an armbar drill I had done about a zillion times and taught to Ronda when she was 15 years old. The next drill was another armbar drill I had done 30 years ago. I am NOT, by the way, saying you shouldn't watch training DVDs. That would be pretty hypocritical since I just said I was watching one. Actually, I wrote down on the training plan for tomorrow to do both of those drills.

There were a couple of other drills on the DVD that I never did to save my life. It wasn't that they did not exist back then - in fact, one of them was one of my coach, Jimmy Martin's, signature moves. I just didn't happen to do them. Rhadi Ferguson never does o soto gari, but it would be a mistake for judo players 20 years from now to use that as evidence that we didn't know o soto gari existed.

There are still two types of matwork and there is still no one I have seen who is equally outstanding at both types. Eventually, Ronda may be the first. Most people don't realize there are two types, or, if they do, believe that whatever type they do is superior. All of those people are wrong.

Most people are not very good at matwork, in large part because they don't spend much time on it and it is not taught very deliberately in most places. If you don't believe me, ask most black belts to name and demonstrate three escapes from pins, an escape from an armbar, two matwork counters and two matwork combinations.

The traditional throws still work if you are very good at them. People are still winning the world championships and Olympics with seoi nage, uchi mata and o soto gari just like people did 25 years ago. Not me, but other people.

The successful international competitors are superb athletes. They spend hours every day on conditioning, from randori to weight-lifting to sprints. Forty years ago, Hayward Nishioka was DRAGGING A CAR around Los Angeles to develop strength. Read Black Belt Magazine from when he was their Man of the Year.

Gripfighting is definitely different. We never did grip-fighting drills. I used to practice a lot of attacks right off the grip and that was considered kind of cheating, even though there was no rule against it. How un-judo-like, to attack before your opponent had her grip. The types of specific gripping drills people do now are new.

Some of the throws are new. Sode tsurikomi goshi is something I probably learned for my green belt test, but people do it differently now, twisting into it. There were far fewer leg picks. Vanderalle got famous for doing them but he was an exception.

People did not play tactically then nearly as much as they do now. Of course, the fatc that when I started competing it was only ippon and waza ari might have had something to do with it.

Bottom-line: There are people who believe that everything is like it was in the old days and they don't need to learn anything new. There is another group of people who believe that judo is completely different now and no one over 40 - and 40 is pushing it - has anything to teach them. Both of those groups are wrong. A key to being a champion is not having the arrogance to think that you are too good to learn. Thinking you are too good to learn except from your friends or people like you in age, location or attitude is just another type of arrogance.
Posted by Dr. AnnMaria at 12:05 AM

Okay, count me among the "most people"... what are the two types of matwork?

One type of matwork relies on speed and reaction, taking advantage of a situation. That is the kind I did. If I was on my hands and knees and you were in front of me, I did one move. If you were to the side of me, I did a different one. If you were coming toward me, e.g, you had just knocked me down for a koka and were coming for a pin, I did another. There was not a single move that I did that could not be executed in under five seconds.

The second type is when you MAKE the situation. Jimmy Pedro, Jr. would be the archetype of this. My coach, Jimmy Martin, was the same way. For example, you look at what the folks out here call a keylock and what Pedros call threading the needle. You pull up the person's arm, put your hand threw the crook of the elbow, thread the gi through and pull them back. There are about six more steps, I think,that I left out.

Thanks, AnnMaria. That's an interesting distinction.

Kind of like the other day when you told me, 'ESPN.com is a pretty big sports web site that a lot of people actually go too.' You don't say...

Thanks for explaining in the comments what you mean about matwork types.