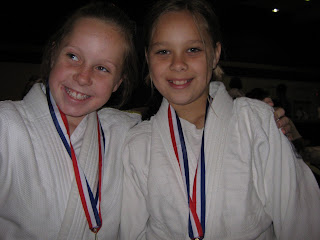 Two people who made a big difference in my life were Frank Fullerton, who died recently, and Bruce Toups,who claimed not to be dead when I talked to him today. Both men had a lot of wisdom.

During the years I competed, they helped me a lot both financially, through the support for my travel expenses and administratively, making sure that I got to tournaments and training camps that I wouldn't have known existed without their efforts. They gave me opportunities that I did not even realize I needed until looking back years later.

When Bruce was Director of Development and Frank was president of USJI Americans won two world gold medals, a couple of silver medals and several bronze. Over the years, they still were available to anyone in judo smart enough to seek their sound advice.

Bruce reminded me recently that at some point in our lives, we need to just look at what makes us happy. It occurred to me a big part of what makes me happy is the really good people I know, most of whom I met through judo.

Every time I talk to Bruce, I learn something about business, about judo, about life AND he makes me laugh. You can't get much better than that. Tonight, Julia was gone until late because she was hanging out with a friend she had met at judo a couple of years ago. Gina isn't doing judo these days but Julia still really enjoys spending time with her. They are both genuinely nice kids. Skye, who is a few months older than Julia, fights her at about half the tournaments. They go back and forth on which one wins, but they are always happy to see one another. Being almost fifth-graders, I believe their conversations can generally be summarized as,

Judo has been part of making Julia happy, not so much the winning but the friends and the being a strong, healthy, confident kid. Those qualities all reinforce each other, as healthy, strong, popular people tend to be self-confident and more people want to be friends with someoen who is self-confident.

When I was talking to Jim Pedro, Sr. yesterday I could hear him and Ronda arguing, as usual. She could not understand the absolute illogic of someone who would have salsa but no chips in their house, suggesting that for lunch he was going to give them peanut butter and jelly that they would have to eat with their hands, because there would be no bread. Jim has her and several other girls working out all day long, running, lifting and doing judo, with jumping in the lake and jet-skiing thrown in but they both have the energy to argue about whether tortilla chips are a basic necessity of life.

Bruce said to me,

"He's doing what he loves helping those kids develop to their potential and instead of being anxious about whether she is training right, Ronda has the luxury of worrying about chips with her salsa."

In judo, sometimes we find people who are good for us in all sorts of ways, even if we seldom admit it. Even if they tell us that chips are bad for us and we need to run sprints at 5:30 in the morning.

Off the top of my head, I can think of people who would give me $5,000 to support judo camps, give me good legal advice, review a mortgage offer, write me a letter of recommendation for a job, explain university politics, make a house call when I have sick family members at home, teach a judo clinic for free a thousand miles away, pick up my youngest daughter from school, find my daughter a hotel room in Japan and talk me out of taking a job that looked good on paper but that I didn't really want to do. I know this because I have friends who HAVE done all of those things for me. That's just a start. The complete list is REALLY long. If you have been in judo any length of time, I'll bet you could come up with your own list in no time flat.

So, here is my judo wisdom for the day. So often we get caught up in annoyance about the petty politics, the people who are self-centered, arrogant or just plain bigoted and we forget that the VAST majority of people we meet in judo are smart, funny, generous and interesting. Enjoy those people and forget about the rest, because you only get one life. Spend it with people who make you laugh, who make you feel better about life, instead of worse.

Frank Fullerton and I were on the same flight back from Athens, after the last Olympics. He looked over his glasses at me, laughed and said,

"You know, AnnMaria, you were a lot of trouble, but I am glad to see you turned out worth it in the end."

What turns out to be worth it in the end? It's like that old poem by Emerson, the respect of honest men, the affection of children, the friendship of good people. I've never been interested in being on all these judo boards and committees, although oddly, I ended up president of California Judo, Inc. for two years and vice-president of the USJA for four years. It is odd because, as Lanny Clark pointed out, while other people have political allies, I just have friends.

Speaking of Lanny, a few years ago, a bunch of judo people went to dinner after the state championships. Someone came up to me the next day and started berating me,

"You're the President of California Judo, and I am on an important committee. You can't have a meeting without inviting me!"

Lanny stepped between us and interrupted,

"It was not a meeting, it was a group of friends. And we don't like you."

So, I may never get to be an Olympic coach or eighth-degree black belt or president of any more things, but that is okay. I have good friends, I get to laugh a lot and I am the world's only woohooshidan, all of which makes me happy.
Posted by Dr. AnnMaria at 11:18 PM