Judo: It beats vacuuming the cat 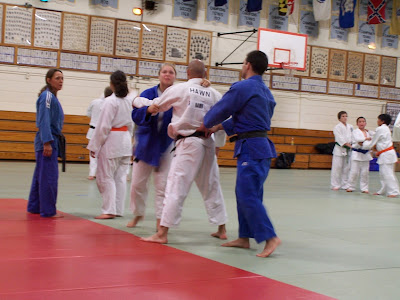 I have a confession to make. Almost every Saturday, I do NOT want to get up and go to practice at the West Coast Judo Training Center.

First of all, it involves getting up early in the morning, which is against my religion. It is because of people like me that the Catholic church instituted 6 p.m. mass. Secondly, there are always a thousand other things to do. For example, today I wanted to read a book on Repeated Measures Analysis of Variance and another on Cohort Analysis, neither of which I got to read. I wanted to watch a tape on gripping and read more of Ron Angus's book, Competitive Judo, neither of which I had time to do, either.

What I did do when I came home from judo 8 hours after I left home was take some aspirin because I have arthritis and when I work out, all of my joints are killing me shortly thereafter. After a nap to compensate for the getting up early thing, I spent the next few hours changing three guinea pig cages, cleaning the bird cage, doing the dishes and vacuuming up the cat hair which has filled the house. It occurred to me that I might be much more efficient to vacuum the cat directly, and hey, it was laying right there.

So, why am I doing this? I was just reading Jason's blog on quitting judo. He makes very sound arguments. He is busy with work and other obligations. He has injuries.

Someone like me must be crazy to devote so much time to something that interferes with other interests, pays no money and causes pain to boot.

Julia has been complaining she hurt her knee - she hit it on a tree playing on a rope swing. She then conveniently "forgot" her running shoes. I borrowed a pair from her friend, who lives right next door to the training center. Julia cried for the whole half-mile jog to the park. Then she cried a little during the first couple of sprints. By the water break she was in an animated discussion with Erin, the gist of which, I believe was, "Boys are stupid and Crystal is mean."

In the half-mile jog back to the training center at the end of conditioning, Julia beat most people by a good city block.

During the second practice, Erik's head hit Julia's shoulder and they both hit the mat. She sat on the couch with tears in her eyes, insisting her arm was broken. A few feet away, Erik told his father with absolute certainty that his skull was broken. At the end of the five minute break, both were out on the mat with a new partner.

Little incidents like these get replayed several times each day. Each one teaches an athlete that she is stronger than she thought.

There is also the plain judo part of it. Today we worked on harai goshi, gripping against left-handed players and breaking grips. Even though a bunch of our regular participants were in San Francisco we decided to have practice anyway, and 14 people came to put in 4 1/2 hours on the mat. In a previous post, I talked about the benefit coaches' kids get in terms of time and attention to developing their judo. These kids get all of that, the full package. They get tougher, they get conditioning and they get someone saying,
"

Eileen, don't collapse forward on your harai goshi, pull and turn."
"Harout, sweep with your leg."
"Julia, get that left leg back."
"Crystal, snap that hand straight down and pop it off your gi, like this."

At the end of each day, it is the sum of those little things that made me glad I went and which get me up at 8:30 am again the next Saturday.

Tomorrow, once I find my iPhone, I will post pictures of Tony teaching harai goshi.
Posted by Dr. AnnMaria at 12:25 AM