How to Do Better 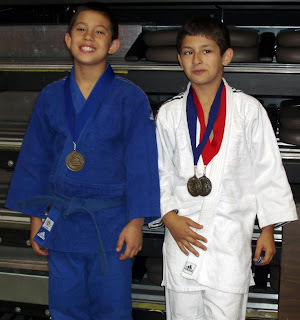 After reading an article I am writing on how judo is eating its young, Serge Boussyou gave me the sage advice,

"All of the problems you point out are true, but you can't just tell people what not to do. You need to give them advice on what to do as well."

Here is a start, in random order. Everyone else feel free to add your comments. I will get some from Ronda when she gets home and a few others as well.

If your child is under 13, I recommend this.
1. Focus on learning, not winning. If you have to choose between whether your child attends a practice or a tournament, pick the practice. Remind your child often how much he or she has improved since beginning judo. It is bound to be true. After six months, everybody is a lot better than the first day. After a year, they are even better.

2. Select tournaments based on ONE thing only - how will it benefit your child? There are a few tournaments a year that I insist everyone from the West Coast Training Center attend, particularly the Golden State Open and USJA Winter Nationals. These are events that are hosted by people who have been good to the center in terms of support, in getting us started and continuing to encourage people to attend. The lesson I want to instill is, "Show gratitude and loyalty to the people who have helped you". For the older players, there is the additional bonus that these are big, well-run tournaments where they get lots of quality competition. I don't think that is the major factor for an 11-year-old. Learning to be a good person starts young. Sometimes I will really encourage a student to compete in an event because I think she is avoiding competition or a particular person because she is afraid. If the player would not be completely outclassed, I really encourage her to compete but NOT before preparing her by making sure she comes to practice regularly and has enough judo knowledge to have a chance of being successful in the tournament. Going out and being cannon fodder doesn't benefit anyone.

3. Set a practice schedule of 5-6 hours a week and stick to it. Six hours is three or four practices a week. This is enough for your child to learn quite a lot and still be a kid. You want him or her to have time for school, homework, reading books, friends' birthday parties and so on. Stick to the schedule. If your child knows he has judo Monday, Wednesday and Saturday, he can learn to plan around that. Expect some whining about the TV show that no one in middle school will ever speak to him again if he doesn't watch on Monday night. Take your child to practice on Monday anyway. Only let your child skip practice for something really special, like their best friend's birthday. The other 51 weeks, your child should be at practice. This teaches commitment and discipline. Children feel more secure with a routine. They will also learn to plan around existing commitments. If your child does not go to practice, don't spend any money sending him or her to tournaments. This is a lose-lose situation. Either your child wins and decides practice is unnecessary or your child loses and decides he or she sucks at judo or that judo sucks. I have heard many parents say,

"Maybe he'll lose but that will teach him he needs to practice more."

If he was an adult with a mature perspective, that might work. I have never seen it work with a child. That doesn't mean it never will, but the odds are not in your favor. Besides, why not take your child to practice regularly, then to a tournament that he wins. I have seen that work a lot.

4. Let your child do activities besides judo, in fact, encourage it. Julia is on the student council, in the debate club, choir, gymnastics and judo. At various times she has taken karate, ballet, hip-hop, Spanish classes, swim lessons and I am sure some other things I forgot. Last year she and I went to Camp Bushido in northern California. This year she went to the three-day judo camp by the sea, where she roomed with two friends and had a great time. (Ronda and I were there, too, but in different rooms.) She also went to two weeks of day camp at the gymnastics school and an overnight camp in the mountains with several friends from her school. No, she is not the world's greatest ten-year-old judo player, but she is a pretty great ten-year-old.

5. Outsmart your child. The more hours you can get your child to happily be on the mat, the better. Here are some things that work for me:

Since I have to leave for practice at the West Coast Training Center in about 8 hours, I am going to bed. I'll post ideas on kids from 13 to 16 or so.
Posted by Dr. AnnMaria at 11:33 PM

This is going on the 'fridge till everyone has read it....twice. Great insight from personal experience....Thanks!

FYI: Edward doesn't look that tuff! I am sending my turtle over.......