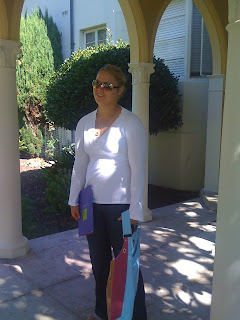 I haven't posted much here lately because I have been involved in a great many other things in life. We went on a campus visit to Mount St. Mary's College, as Ronda is checking out schools. She starts classes at Santa Monica College in a couple of weeks, but her plan is to transfer to a four-year school ASAP. Since she did not get back from the Olympics until most schools had started, she elected to take some eight-week courses at SMC to at least get some credits this semester.

Work has been very busy. I am teaching a new course on Stata next week, which is the statistical software package I use the least, a course on SAS, which I use a lot, a class on statistics at Loyola Marymount, a guest lecture for the USC Academic Medicine program on data analysis, finishing some web pages on graphics and reporting, preparing a class for the week after on high performance computing, trying to get SPSS server to work and then answering the usual 101 questions that people email, call or drop by about on statistics every day.

In the midst of all of this, my friend for the last 18 years and business partner for much of them was diagnosed with cancer. Let me summarize this briefly as this sucks all the way around. We have been friends for nearly two decades. I have been married three times and this friendship has lasted as long or longer than any two of those marriages put together.

So... he flew out to LA this week and we talked about the new project we are working on for tribal ethics. We also talked some about ethics in general, the values people live by, our beliefs in God/the creator/the Spirit world, and all of the things we have experienced together over the past 18 years. We have gone from teaching at colleges and universities to starting our own business. We have had a lot of dinners at a restaurant in Union Station near the capital before meetings with senators. We've made a lot of money, raised children, between the two of us, buried a husband and a son, grieved together, succeeded together, learned together and occasionally yelled at one another. We had dinner overlooking the marina one night and good Italian food at the Promenade the next. I had originally suggested sushi, but when he said,

"You know, back home, we put that on a fish hook and try to catch our dinner with it, and you guys just have it for dinner. I don't know...."

I thought maybe Lago would be a safer bet.

The first time I had a friend die, it was someone I knew in judo. I still remember it. Packy and I had been friends in Japan when we were training, where he had taken the current high school national champion, Kenny Patteson. When I moved to LA, I was shocked when who walked into Tenri but Kenny, who was now attending UCLA. Over the years, Packy and I would talk on the phone and run into each other at tournaments. Sitting around at Tenri one night when Kenny had just got back, I asked him how his Christmas vacation was. He said,

I almost punched him. I told him it wasn't funny. It turned out not to be a joke. He was having pretty routine surgery, had a reaction to the anesthesia - you know how they say 1 in 295,000 people will have an adverse reaction - and you say, "Yeah, yeah," and you sign the forms before surgery? Well, he was the one.

As you get older, the first thing that happens,usually, is that your mentors die, the people you look to for guidance in life, to teach you right from wrong. When I was competing, I would call my grandmother before every tournament, and she would go to mass and light candles for me. This is something I do for Ronda to this day. Nanny died in 1999. My doctoral advisor, the person who I always could call for advice about statistics, died several years ago. About a year before he died he said,

"You don't need to call me. You understand this stuff as well as I do."

Still, I liked the security of having someone to tell me I was right. And then he wasn't here. Isao Wada died this year. John Ogden died. Kenso Kiyuhiro died.

As you get older, it goes from being people of your parents' generation who pass away to people of your own. Steve Bell died at 46. My husband, Ron, died at 54. My friend who was diagnosed with cancer is 55.

All of this is a reason to pause and think about what we are doing with life. Is this what I want. More and more, I am focused on the things I enjoy doing in life and dropping those that I don't. After work yesterday, I dropped by the carnival at St. Anne's School, just because Dennis and Julia were there and I felt like it. My unappreciative child broke three confetti eggs on my head and my more appreciative husband had a glass of wine with me while we listened to live music which could be described succinctly as louder than it was good. Still, we were not quite too old to enjoy it.

This doesn't mean I have quit judo. I went to the training center today and was very happy to work with some very good up-and-coming judo players. There also some past the up-and-coming stage. I guess Tony Comfort didn't appreciate the YouTube video of him and Eric slacking the last practice, because he was throwing everybody around today. I don't think of Tony much as a matwork guy but he was pinning lots of people, too. 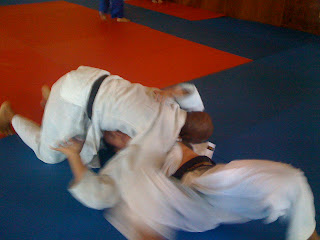 Whoever that is he has pinned there is just one of many of today's victims.

Although I do enjoy judo, I am finding a lot more balance in my life. The things I enjoy the most, like practice at the training center, I am still doing and things I find the least rewarding, I am not doing, like meetings with people who have very little judo knowledge and for whom I have zero respect. There is a USA Judo election this week and I am not going to be within a thousand miles of it. In fact, when they are casting the votes, I think I will be discussing array statements in a classroom at USC. Some people tell me I "owe it to judo to give back". I don't know if I still owe anything to judo after thirty-eight years in the sport, but I am pretty certain by the aches in my knees, hands and elbows tonight that I am still giving back, but in ways that I choose, not that other people choose for me. (Re-read that last phrase, it is important.)

This isn't to say that life is perfect. There were a couple of kids I wanted to thump on the head at practice today,

"Can I go work on armbars with Ronda?"
"No, you are in this group because you are 10. You cannot do armbars for another five years."

Even those kids are a pleasure, though. They are at the training center because they are talented beyond their years; 80% of those who attend are 13 and older. Today, out of 30 people we had five who were under 13. They have adult-sized talent with child-sized bodies and maturity. So, even my frustrations have a good side.

Tomorrow, some of the players will be at a tournament, some will be at practice at the training center and my little Julia will be home studying. And it will be another beautiful day in paradise. 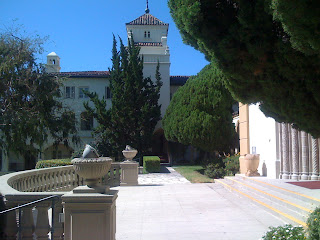 "As you get older, the first thing that happens,usually, is that your mentors die ... "

Or retire or both. That was something that really hit home when people who I relied on, knew and they knew me, retired. Then they started dying.

As one of my professors noted, as he kept missing class to go talk at funerals, once it starts it never seems to end, unless you go much too soon yourself.

I'm glad you are focusing on the things you choose, that is an important thing to learn to do.

I think you are right. There is a song that is sung at Buddhist funerals. It is in Japanese. A few years ago, Hayward Nishioka was standing behind me at a funeral and commented soberly,

"You know, what's really scary? I've heard it so often, I think I'm starting to learn the words to that song."

I wonder what it is like to be really, really old when most of the people you have been close to have died?