Since Ronda had the day off, she dropped by the house to take Julia to judo. I was supposed to spend the whole day at the coaching clinic getting smarter but the morning was taken up writing an article about on-line education. I had to chase down a problem with the data that I finally solved around noon.

I was on my way to San Gabriel Dojo when it occurred to me that I only like the guys there, while I love my kids. So, I drove right on past and went to the West Coast Judo Training Center to watch Julia and Ronda practice. I also got the chance to do several rounds of matwork and a few rounds of randori with Julia, Erin and Erik. My knees are really too far gone to do randori with anyone of any size.

I did cut out of practice early and run over to San Gabriel. I would have liked to have attended the whole coaches' clinic if I could have somehow managed to figure a way to be in two places at once. Gerry Lafon is our guest instructor at the training center tomorrow, doing a clinic on counters. It should be good.

At practice today, Ronda was working out with Tony Comfort the 90 kg champion in 2007 at the USJA Winter Nationals. Tony also won the Golden State Open a couple of times, placed several times in the San Jose Buddhist and U.S. Senior Nationals, was a competitor in the 2004 Olympic Trials and represented the U.S. at the Paris Open.

Here is Tony being pinned by Ronda. 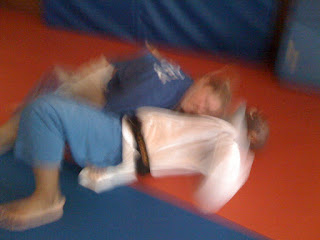 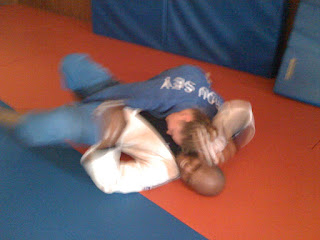 You'd think he would have got up by now, but no. 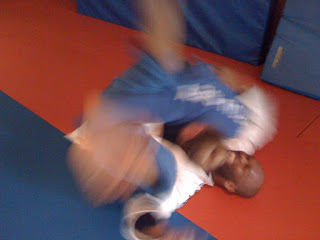 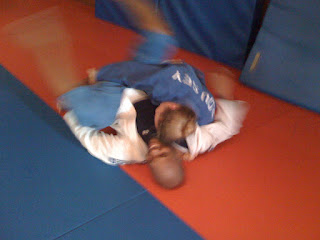 Here is another picture of Tony being pinned by Ronda. 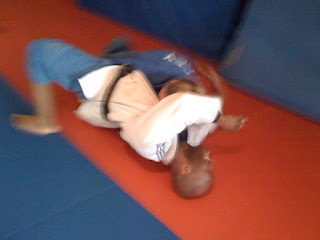 Tony did throw Ronda twice during randori. Unfortunately, I missed getting a picture of that. She threw him, too, but I missed that also.

The perfection of the day was a bit marred by Ronda's dog, Mochi, peeing on Gary Butts' sleeping bag. He was NOT amused. The rest of us, though, thought it was hilarious.

Practice is tomorrow at 10 a.m. Drag your sorry @$$ out of bed and show up, unless you live like in England or somewhere, in which case, never mind, it's too far.
Posted by Dr. AnnMaria at 9:52 PM

Judo a gentile man’s sport has now been introduced in all most all the countries in the world and gaining popularity by the day. Judo as the name goes (the gentile way) allows players (judokas) to discover them self through the martial may.