Being a good teacher of judo (or anything else)

So begins a very good book, Writing to Teach Mathematics and Science. I thought of this the other day when I spotted a video by a very good judo player. A couple of years ago, I saw this person giving a clinic and while the other coaches in attendance were impressed I was extremely disappointed.

This person must have taught 50 different techniques in less than three hours. Other coaches were exclaiming,

"He knows so much! He's incredible!"

He certainly achieved the first rule, having something to say. However, he would teach at least ten techniques and then tell those attending to "Try it."

I think this gentleman was truly excited about judo and a genuinely nice person. However, he was so focused on what HE had to teach that he didn't really give the students time to practice it. I am not exaggerating, he would talk and demonstrate for ten or fifteen minutes, and then give everyone three minutes to work on the ten brand new techniques they had just learned. Then he would call us all back together and start over.

So, here are a few other rules of good teaching:
Give people time to practice. After you have taught something, let the students try it for themselves.

Re-teach. Since you are only teaching one thing at a time (you were listening, right?), you can observe how your students are doing, call them back together and re-teach the parts with which they had difficulty.

Accept that you are not going to teach everything in one day. If you only have one practice, don't show 36 techniques. Some instructors do this out of conceit, they want to show how brilliant they are. Some do it with good intentions, they want to show everything that might possibly help the students. And some have simply never thought about teaching judo. They do judo, here is some stuff they do. Done.

Whatever the reason, the fact is that their students would learn BETTER if the instructor picked a few (no more than three) techniques and taught those, giving ample time for each one.

This is how I teach and not a lot of people rave,
"Oh, she's so great, she's so brilliant."

That's okay. My goal is not to show the students how much of a better judo player I am than they are. It is to make them better judo players, even by a little fraction. So, I try to teach whatever technique I think will help those students for whatever level they are right now. Sometimes, those are pretty basic techniques. 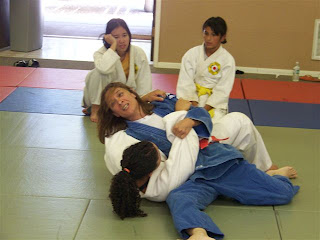 At some point, it may dawn on those students that I actually do know a fair bit of judo. Or not, maybe they will always think that Videotape 150 Technique Man is far more knowledgeable than me. That's okay, too. Either way, I got to share with them a little bit of judo that I know. And either way, tomorrow will still be Tuesday all day and all night.
Posted by Dr. AnnMaria at 11:05 PM

This is a wonderful bit of advice! I try to do this, but being young in the teaching of judo, sometimes I forget.

Thanks for your wonderful advice and service to USJA!

My son's club (6 to 12 yr olds)makes a similar mistake. They will do a good job of teaching a technique one day, but they won't touch it again for weeks or months. You need to make the new technique part of the daily routine for a number of days if you want it to stick.

Enosis -
Yes, that's another excellent point. Your teaching should be part of a PROGRAM, not a lot of disconnected bits.