Focus on the Good & Carry a Calf

In a discussion completely unrelated to judo someone brought up today that while people who are negative are often loudly negative, people who are doing good things often do them quietly with no major effort to attract credit.

Also, I was feeling that I could never write a long enough president's letter to thank and recognize all of the people who do good things every month. So, I am asking you all if you don't mind to send me an email on the things you do. I would like to put a different post on my blog every day of people doing good things. Along with all the other random ramblings I put on here.

Here are two people I'd like to recognize today. Conveniently, both of them are in the same picture!

Saturday 30 January 2009; twenty three (23) members, of both the USJA and the USJF, participated in the Coach Certification Clinic in Campbell, CA. The Clinic, hosted by Hans Ingebretsen and conducted by Charlie Robinson, was an exemplary example of the continuing cooperation between Judo Organizations, toward the growth and strength
of Grass Roots Judo in America. Three (3) of the participants were in attendance just to participate with members of their family or Club. The other participants were there for initial and re-certification, at the Assistant Instructor and Coach levels. Charlie Rbinson is on the left in this picture. 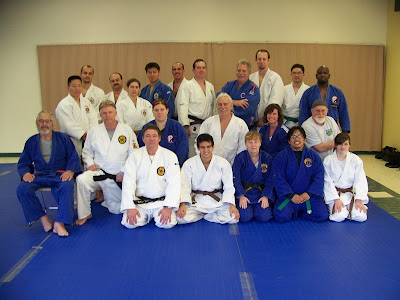 This is from Joa Schwinn, who is the guy in the hat on the right in this picture.

"On 2/26 we will be holding our 6th North Bay judo clinic, which has been a joint USJA and USJF event for almost three years. Usually there are 4-5 schools that attend with 80 judoka attending last event (we started with 5 of us!). We pick four instructors (not always the same) and run 10-12 minute sessions with groups of similar make-up rotating through. Then there are two mats that we run randori on with 1 minute matches. Rule: you cannot randori with someone from your own school.

Camp Bushido is revving up. Shorter (4 days) and earlier (7/5-9/10) this year. We only have 1/2 the building so it will be limited soace and we will fill. Hoping to get a top level competitive judoka to be the featured guest instructor.

Finally, we will be holding our 2nd North Bay ("Developmental") Shia and Referee clinic. Kyu rank only at the shiai where the refs that took the class the day before get on the mat qualification taken care of. We had 18 new refs last year!!!

I would like to take this opportunity to make a personal aside to my daughter - I told you so. When we were out today while she was running her sprints I told her that three things are very important at this stage in her training.

For example, today was the beginning of the month. There is a hill by our house that anyone who has ever visited has nightmares about running up. It's about 45 degrees. Ronda sprints up hill, walks down and then sprints up again. I time each sprint. I told her that we would add one more sprint every other day until she was doing 25. After a point if you keep doing sprints it's not the same workout, so she will only go up to 25. After that, the focus will be on increasing the times and decreasing the rest in between.

I told her that it was like the story of the guy who carried a new born calf around. He carried it every day and by the time it was full grown he was carrying a bull on his shoulders. She said I totally made that up. The story was about a famous wrestler in ancient times. Milo of Croton. I looked it up.

Be like Milo. Start increasing a little every day. Keep a record. Start today.
Posted by Dr. AnnMaria at 9:40 PM

Good post. Nice to know your deeds & purpose. You are good writer & business coach. Your work is really inspirational.

As someone who did his Bachelors degree in Classical Studies, I wholeheartedly approve of your Milo reference. :)