The Kids are All Right

First of all, a brief aside that parents everywhere will understand - to anyone who has ever said anything negative about any of my children.
"Shut the $#@^ up." 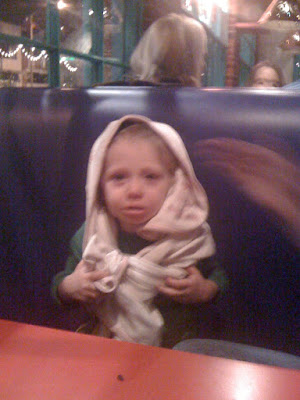 Many people know I have an older daughter named Maria. She was born during the years I was competing, learned to walk while I was at the Panamerican Games and has grown up to be a sports writer, first for Sports Illustrator, then the Fort Wayne, IN daily newspaper and now at ESPN. Bless her sweet heart she has even gotten some coverage of judo players in ESPN . More than once. Plus, she is the mother of my one and only grandchild, Eva Maria Ortiz who is just amazingly beautiful and smart and funny. You are all requested to please refrain from noticing that she looks like a Russian orphan in the photo above, which was actually taken at Lula's Cocina, two blocks from Santa Monica Beach and not in a Russian orphanage as it might appear. 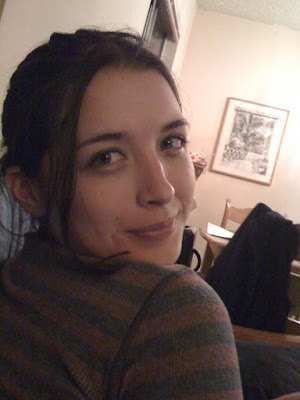 Then there is daughter number two, often referred to as "The Invisible Jennifer" because so many people say,

"I didn't know you had another daughter."

In fact, Jennifer and Ronda were born 13 months apart, approximately 22 months after their father and I were told that the odds of the two of us having children were extremely slim. After much soul-searching, we decided that we wanted to get married anyway and take our chances. Which resulted in two children before our second anniversary.

While Ronda was trotting the globe and racking up wins, Jennifer attended college, graduating from San Francisco State University at age 21 with a degree in history, teaching at various private schools for a while. When I took a job at USC that offered free graduate school tuition, with that little condition of getting accepted, she applied, took her graduate admissions test with about a three-day notice and started in the joint credential and masters program.

Which brings us to today when Jenn is doing her student teaching (now politically correctly called guided practice for some unknown reason) at Samuel Gompers Middle School located in Watts, an area of Los Angeles noted for a number of things, none of which include affluence, low crime rate or high academic achievement. In fact, of 1,502 students in the school, 0 are white, 1,371 are considered socio-economically disadvantaged and more than half speak English as a (sometimes far) second language.

Recently, I was at a conference where a speaker said,

When I told her that, Jennifer said,

"Well, that fits me perfectly because I teach middle school and I love my students AND my subject."

Her subject currently is medieval history of Asia, which included the samurai and so it seemed a good idea to rope her younger sister into coming to the class as a guest lecturer. In the best show and tell ever, Ronda lifted the teacher over her head demonstrating a judo technique (kata guruma ). 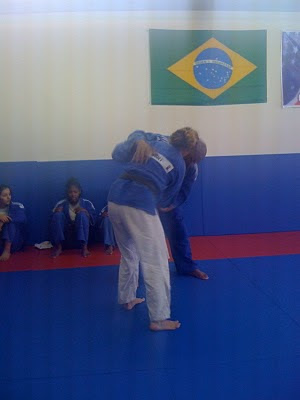 The students were so excited about the whole judo idea that it was suggested perhaps they could have a judo class there once a week. I talked to a few people about it, including one of our coaches who actually WORKS as a police officer in the area, but could not find anyone available.

When Jenn mentioned it to Ronda she said,

"Sure, I could teach there after school once a week."

Okay, hold on a minute. So we have someone who is a two-time Olympian, Olympic medalist, world medalist, offering to teach for free, in Watts ?

When Ronda stopped by tonight I asked her,

"So, did you really tell your sister you would teach at her school once a week?"

"Sure. Those kids were awesome. I really liked them. Besides, the chances of finding someone who could be really good out of those kids is probably more than in Santa Monica. I bet those kids are really tough. Who knows? Maybe we can recruit them to come to the West Coast Training Center if they are really good. We'll get them rides out there somehow. The school has mats. But how are we going to get them gis?"

SO... I suggested to Ronda maybe I could post something on my blog. If you live in L.A. and you have gis you'd be willing to donate to a middle school program in Watts, please drop them off at the West Coast Judo Training Center. We are not open this Saturday because almost everyone is at a grappling tournament. However, we are open this Sunday and every other Saturday and Sunday (as far as I know) for the next three months.

My kids have had their less-than-Hallmark moments. But not lately.
Posted by Dr. AnnMaria at 12:23 AM

You may want to send this info to Samantha as well. Maybe she can pass the word to her Karate friends and they can send out a box of gis. (Not sure if their gis or the same or not.)

That truly rocks! I hope you get what you need! If you don't, my taxes are coming in, I might be able to afford a few for them...Matter of fact I've got a shrunken size 2 if that'll work for any of them...

Crazy long shot here, but if you could coax Maria into writing a story about it on ESPN.com, or contact the local media in LA, maybe you can get a donation or two.

I'll contact Sam. Karate gis would be okay for practcie, which is all they will be doing this school year.

What a proud Mum you must be, that is a wonderful thing Ronda is prepared to do for those children.

This kind of information is very limited on internet. Nice to find the post related to my searching criteria. Your updated and informative post will be appreciated by blog loving people.