Nobody Should be Judged on a Single Day 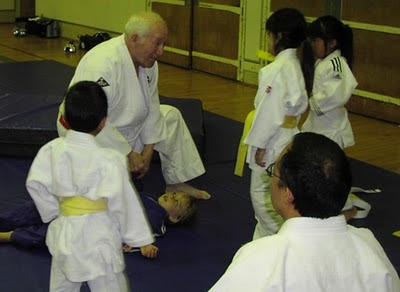 I was reading Tom Peters' blog one day (no, he doesn't do judo, he wrote the books In search of excellence, Wow! and several other books on business) and he commented on an article in Fortune magazine where the reporter, writing about someone at Goldman Sachs, said that his decades of work could be wiped out in a single day. Peters said,

"Suppose my net worth was 100.000% wiped out this morning. I would be unhappy. Very unhappy.

But if my net worth went to zero, the value of my last several decades of work would be precisely the same, for good or for ill, as it had been before the net worth tanked."

The same is true in judo, teaching, parenting, life. I see so many people incredibly stressed out because they act as if their net worth is determined by a single day. I can't really criticize them, either, because I am guiltier of that than most people. To this day, if I make a mistake, if I do the wrong thing and hurt a friend's feelings, if I don't know the answer to a statistical question, if someone I coach loses a match, I feel like a complete failure. When I was younger, it seemed as if losing a tournament would be the end of the world and prove that I wasn't any good as a judo player, as a human being. God forbid that I do poorly on an exam, much less get less than an A in a class. I must be stupid. None of this makes any sense at all. I graduated from college at 19, earned a Ph.D. , just had another scientific article accepted for publication and am flying to Minneapolis next week to present on my latest research. The fact that I did not know the answer to that question yesterday, off the top of my head, regarding how Stata reads data in a parallel processing environment does NOT make me a moron. (Besides, it was the opposite of what you would expect.)

Maybe if you kill a bunch of people or molest small children that single day defines you as a bad person. Still, I don't believe anyone goes from Joe The Nice Guy to a child-molesting serial killer in a single day. I think they work their way up to it by a lot of days of pulling the wings off flies and looking up dolls' dresses before they finally end up in full-fledged Silence of the Lambs mode.

SO many people quit judo, or at least the competitive part of it, because they put themselves under so much stress, acting as if their entire life is going to be defined by whether they win or lose on a given day. Look at the picture of Hal Sharp above. He won the Emperor's Cup in Japan over 50 years ago. Is that what makes him a great judoka? Or is it the fact that he wrote The Sport of Judo, still in print decades later and the first book I, and many others, ever read on judo. Or is it the Kodokan Technique Program that he and John Moe are working on now? Or is it teaching at Gardena Dojo? Or is it all of the times he has volunteered to teach little kids? Or running his own judo club?

Of course, that's silly to even ask. It's all of those things. Today, I was just having a bad day, feeling like I had done a bad job as a parent, statistician, judo coach - just one of those days when the small successes were outweighed by the small failures. Ronda, on the other hand, called me on the way home from having a particularly good practice and burst into singing that song from Annie,

"Tomorrow! Tomorrow! The sun will come out tomorrow.."

The truth is, we're what we make of all of the days stacked on top of each other. With some people, like Hal, that can be a pretty tall stack.
Posted by Dr. AnnMaria at 11:19 PM

Hey Coach,
Going from a great day in judo to a bad day overall is just kind of the rock n' roll of life. It happens, you pick yourself up, dust yourself off and get back in there. Nobody remains an elite player forever. You might be in your peer group (50 and above for both of us), but we know we can't go toe to toe with the youngen's anymore. So, your a statistician.......change the equation!
Dillingham

Restaurants in the United States. Search or browse list of restaurants. http://restaurants-us.com/tx/Plano/LOFT%20610%20Urban%20Restaurant%20and%20Lounge/75024/

Your blog is outrageous! I mean, Ive never been so entertained by anything in my life! Your vids are perfect for this. I mean, how did you manage to find something that matches your style of writing so well? Im really happy I started reading this today. Youve got a follower in me for sure!