If you ever watched even one tournament you've seen this happen ... One person is thrown, knocked or falls to the mat. The other player stands there for a few seconds and either doesn't follow through at all or moves to a different position before going into matwork. Nothing of interest happens and the referee makes them both stand up and start again.

What the hell happened?

Yes, this really is labeled "Secret of matwork #14" in our book.

One reason people will let an opponent have a chance to escape is that they only have a limited number of techniques on the ground. They have to move from the side of the opponent to in front because they don’t have any moves they can do from the opponent’s right side.

In the photo below both of the players should have practiced attacking from the position she finds herself in. 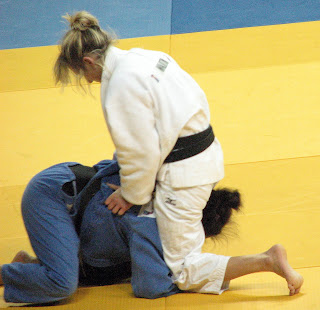 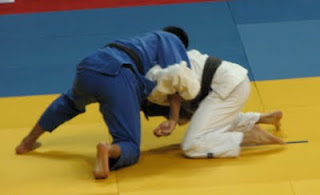 9. You are on your back. The opponent is between your legs.
10. Your opponent is on her back. You’re between her legs. 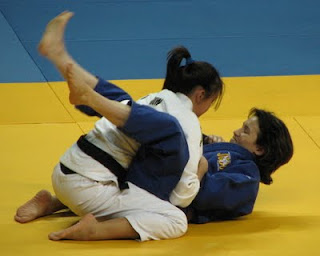 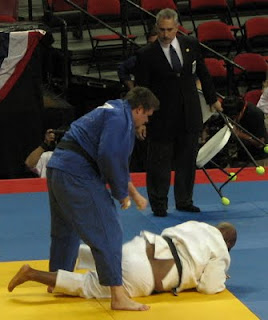 In this case, for the person on the bottom there is not a very good attack, but what he should have practiced is getting out of there and into a better position.

How do you get an attack from every position? Go back and read some of those posts about drills and repetitions.

We want you to notice something here. All of those pictures above are from one tournament, the 2008 Olympic Trials. If we can go to just one event and find examples of all of these situations, they must occur fairly often. If you know you’re likely to find yourself in a situation, practice for it. It only makes sense.

And that goes not only for positions you're going to find yourself in, like on all fours with the opponent in front of you, it also goes for situations you'll find yourself in, like behind by a yuko and at the edge of the mat. If it's likely to happen, you should practice for it, don't you agree?
Posted by Dr. AnnMaria at 1:28 AM

"There should be no position, no place on the mat, where your opponent is safe from you."

THAT is the mindset of a champion. THAT is the directive of champion coach.

Pretty helpful data, lots of thanks for your post.