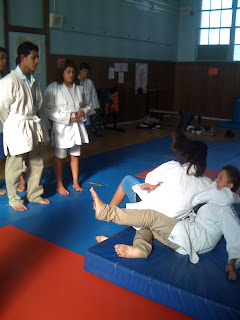 For years, I have been hearing that judo needs to be taught in the schools. Starting sentences with, "The problem with judo is ..."  happens so much when black belts get together you almost wonder if it is part of the promotion exam.

The first argument goes that everyone (or, at least, a lot more people) would love judo if they knew about it. Japan has very good judo because it is taught in their schools and millions of kids take it. The hundred thousand or so that get to black belt are the pool from which their Olympic teams can be drawn. 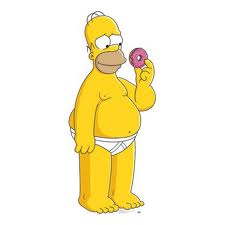 After this point, most judo coaches seem to adopt the Homer Simpson model. (A disadvantage of being married to someone obsessed with The Simpsons is that he has an analogy for every issue in life with a Simpsons' episode. In this particular one, Home is elected to public office based on the slogan, "Let someone else do it.")


Dave Winer is a pretty successful businessman. He's founded two software companies, made some interesting contributions to technology we all use - like the original outlining program - and has the opposite attitude of Homer. On his blog yesterday, he suggested that rather than complaining about all of the problems in America, some of us voluntarily roll up our sleeves and start fixing things.

Which gets me to my point - this is the third year that we have had a program at Gompers Middle School. For the first two years, the mats were loaned by a very kind karate coach. Now we have some different loaner mats surrounded by a safety area of very old gymnastics mats. We have a dozen used judo gis that kind friends and former students of mine donated (thank you!). That is not enough since we had 14 kids signed up for judo and not all of the gis fit all of the students. One young man much bigger than me was wearing a size 2 because that is all that was left. Still, we are in the third year of the program.

Here is how it started - the teacher asked Jennifer, my second daughter, who was a student teacher back then, if she knew anyone who might teach judo. Jenn got Ronda, her younger sister, who had just come back from the Olympics, to volunteer.  We borrowed mats from Sean Davila, a karate instructor who also writes Christian books. Sean is one of those people who give Christianity a good name, a follower after Father Loyola Ignatius who believed that God's charge is that we do good in the world - NOT that we go around judging other people, like some right-wing nut jobs seem to think. But, I digress. Anyway, I knew Sean was the type of person who would let us use his mats for free if he wasn't using them - and at the moment, he wasn't.

Ronda taught there for a year, and I would substitute when she couldn't make it. After she started MMA, it got to be more me teaching there and her substituting when I couldn't make it. After another six months, Blinky Elizalde began teaching as a substitute as well. Ronda now drops in once or twice after a fight during the period she is taking a break from training, or if we really get in a bind and neither Blinky nor I can make it. 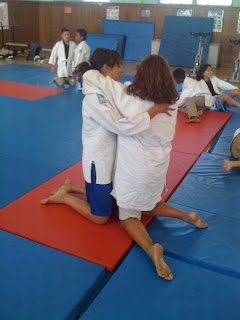 My point is that if you really want to have a judo program in a school - just do it. If you really think the Los Angeles public schools (or your school district) needs more help - just do it. Find a teacher to sponsor the activity, borrow some mats, get some judo gis from your friends and show up.

I really think the success of the Gompers program is in part because we have multiple instructors. We never cancel practice. Sometimes the school cancels practice because they have an event, like a school dance, but WE never flake on them. Yes, it is a volunteer activity, but there are three of us and between the three of us, we can make it there one day a week for thirty-six weeks out of the school year.


Speaking of showing up, I better get in the car and head out to the new West Coast Judo Training Center location.
859 W Foothill Blvd
Claremont CA 91711

While I admire the concept - and support it completely - the program couldn't have gotten off the ground if there hadn't been people to donate mats. You can have all the time in the world, but if there's no money or resources, you won't get very far.

You are correct. My point is that I called someone and asked him to let me borrow his mats. I didn't expect someone else to find mats. That's what drives me nuts, is the huge number of people that think SOMEONE ELSE should go and find mats for them.

You are also correct that we were EXTREMELY lucky to have Sean willing to lend his mats for years. What an awesome guy, no?

That's kind of the point, really. He didn't have time to teach, but he was willing to lend his mats. One of my former students sent cases of water a couple of times, just had them sent to my house, because he knew the kids work out in a gym with no air conditioning and it's really hot in September. He didn't have mats or time to teach but it was what he could do.

Can someone tell me where in the archives I could find an example of what your heavy off season training looks like? Thanks for your work Ann Marie. I love this blog.

I don't see that I posted an off-season training program on here. We do have it in the first part of our book, though.

Wow, there is a lot of useful data above!