Thank you to Ken Brink of Welcome Mat Judo for giving permission to reprint his article here. It was in Steve Scott's Welcome Mat newsletter and I thought it was well worth repeating.

A recent conversation I heard someone say, "It’s better for young players to focus on the fundamentals of the game instead of winning and losing. There can be a lot of anguish associated with competitive sports for young players".

Life isn’t generic; competition varies in everyday functions. I believe that many youth sports are missing the coaches and parents who know how to set the essential ground rules for healthy competition for their athletes. 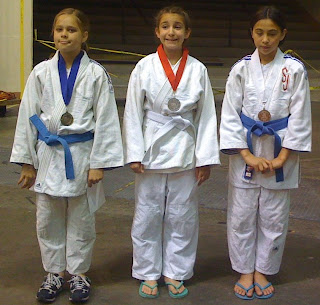 Since our club was formed, I’ve witnessed an underlying fear or reluctance by many of our kids to compete in a tournament. Some of the kids that do compete are so overcome with anxiety that they struggle to perform during the match. After speaking to many of the kids after the match about how they thought it went, many just answer "I don’t like to compete" or a parent will inform me that they are "afraid it will ruin my child’s confidence." Judo is a tough and challenging, physically and mentally. No one has ever gained confidence without having overcome a significant personal challenge. A parent who shelters their child from challenging situations will keep their child from developing the vary skill they want their child to learn.

My personal belief on this matter is that competition is an important valuable and critical element of our society. Every child, during the course of his or her lifetime must compete in some form. It may be for grades in school, on the playground with friends or even in the work place for advancement. At some point a child must be empowered with philosophies and values about competition. Reflecting on my own childhood I began to realize that not everyone has had the advantage of experiencing a unique coach or leader who was able to instill a positive philosophy about competition that I had. There are many parents that don’t understand the attitude towards healthy competition. Another reason is that society is in love with the winner, only caring about who took first. Can you remember who took 2nd place on American Idol last year?

Through my years of coaching I’ve watched children quit because of a bad experience they had during a tournament. Regardless of the sport or child, it can usually be traced back to parents, coaches or a family member who is solely focused on winning that the child learns to associate losing with failure. Many times losing for these kids’ results in a verbal or physical punishment. Does it make sense why kids don’t like to compete?

During a tournament we ask that a child does their very best, gives 100% effort during the match and utilizes the skills that they have been taught. Winning is not based on the end result of the match but what happened during the match. Did the child gain ground on an opponent that they had lost too previously, did they work in the new technique they just learned, how did they handle themselves after the match was over, regardless if they won or lost. If the end result is a victory…Great, but should they lose then it is my responsibility to figure out why and help them improve.

In our program, we teach self-confidence, self-discipline, self-control and self-respect. These are all life skills that are acquired as a result of an extended participation within our program; these are not skills that can be taught within one or two sessions. One of my fundamental beliefs is that empowering the child’s belief about competition will help them become more self reliant, mentally tough and self confident. By avoiding competition kids may be missing these valuable life lessons.
Posted by Dr. AnnMaria at 10:08 PM

I was raised in an atmosphere of "Losers Lose, Failures Fail"and "Second place is first loser." Got it from my dad, my military instructors and some of the martial arts instructors I've had with some judo instructors being the worst of the lot. By the time i was 19, I swore I would never compete is a team sport again. I'm 56-years old and I can't shake that.

I know the feeling. So much pressure at times. Especially when you are doing something that you just want to have fun in.

I never really competed in sports growing up. Played street ball a lot but when I tried out for my middle school basketball team I missed every lay-up during the lay-up drill.

Interesting, though, is that I loved music and did well in it. In some ways, I knew I was competing for a higher chair but in other ways I didn't because it was so fun and I enjoyed it so much.

Hey, anonymous -
I am sure there are conditions in which competition is a horrible experience.

When it came to sports, I certainly was the one who put that pressure on myself. Neither of my parents could have cared less if I ever competed in anything. If I placed second in the national championships, my mom thought that was great, my coach thought that was great and I was devastated.

I'd say for most of my first 7 years as a competitor, I was much more concerned about winning than anyone around me, including my coach.

On the other hand, I have seen coaches who freaked out if a six-year-old kid lost a match. I don't think that's the spirit of competition Kenny is talking about.

Well, and I am the same Anonymous who responded first, I have finally come to realize that the best way to never lose is never enter. All the best to you and yours.