On Friday, I was thinking,


"I really wish I didn't have to go to judo class today."


Of course, when you're the teacher, you can't skip class, so I had to show up. As I was driving in rush hour traffic to get to the middle school where I teach judo once a week, I was thinking about all of the work I had to get done. I was hoping the sponsoring teacher would call me at the last minute, as had happened several times before, and cancel class.

It was over 80 degrees, and paradoxically, I thought it would be a good day for an extra hard work out. Those are the kind of things you remember and talk to your friends about later,

"Remember that time when it was so hot outside and she had us run sprints in the gym and then we did all those leg lifts and exercises? I thought I was going to die of heat stroke during practice! My stomach hurt for three days afterward!"


Anyone who lives in Los Angeles knows we measure distance not in miles but in minutes. It takes me about an hour to get to the middle school from my house, which is plenty of time, after over 30 years of coaching, for me to have a good lesson planned out for an hour and a half. 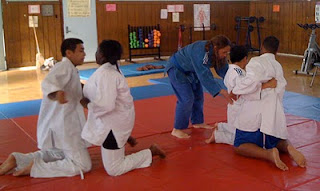 When I got there, the sponsoring teacher was late meeting me at the gym (you can't have a class on a public school campus without a teacher supervising it).  While we were waiting for him, several of the kids who had come for the class had left. We had to track down someone with a key.  Someone kindly drove over to the gym and opened the doors. The teacher, I and the one student who had waited around went up to start putting down the mats. While we were doing it, the kids who had left came back and helped set up.

We did sit-ups throwing medicine balls back and forth. Then we laid on our backs and did straight leg raises and spelled out the alphabet with our toes. (MUCH harder than it sounds - try it!) We did more leg raises. Then, an uchikomi drill where you have two people, one at each end of the mat, and the person in the middle sprints back and forth and does as many uchikomis as they can in a minute. We did this for forward throws and backward throws.

We took a water break but the bathrooms were locked and there was no working water fountain anywhere close. Fortunately, the teacher had two bottles of water. We just passed them around with everyone holding it over their head and pouring it in their mouths like catching raindrops.

We took a mental break and did a game that I learned from Maurice Allen, where the students run around the mat and the instructors throw a giant rubber ball at them. Like dodge ball while running if the ball was almost as big as you.

Then we did matwork uchikomi as many as we could in a minute, reviewing a rolling choke that I had taught last week. Next, we did a wrestler's roll turnover drill, again, as many as possible in a minute.

We finished off with everyone doing a couple of rounds of randori.

At the end of ninety minutes, , the students put the mats away, finished off the last few drops of water and sat around in exhaustion, but it was a good kind of exhaustion.

One of the students commented. The others all smiled and nodded, agreeing it was, indeed, a good day.

After the students had all left, the teacher apologized for the delay getting started, but said it had been a bad week. The day before, one student had pulled out a knife in response to bullying, and another student had pulled out a gun. Yes, one of the middle school students had a semi-automatic weapon in his backpack, with an extra clip. The school had been locked down, all of the students kept in the classrooms until the police had come and taken the two students involved away.

This isn't the first time incidents have happened on campus - which is why several times in the past class has been canceled. Of course, there are other reasons. There is a real shortage of teachers willing to stay after school - at no extra pay - so if the supervising teacher is sick, on jury duty or not there for another reason, we have to cancel class. There was another teacher but he left, frustrated with all the budget cuts that he could never get a permanent position at the school.

This program is the longest running extracurricular program at the school and we are only on our third year.

The gym is filthy. Janitorial staff is another thing that was cut in the latest round of budget cuts. The mats are borrowed. The judo gis are donated. I teach for free and the sponsoring teacher volunteers his time after school. People just get discouraged by the lack of support, lack of resources, and they don't feel secure on a campus where a student brings an automatic weapon to school.

But ... for those kids in my class, today was a good day.

...you just don't know how much these kids and the kids at West Coast Judo Training Center really appreciate you...

Aw, thank you Anonymous (if that is REALLY your name) I appreciate them, too.

I want to be you when I grow up.

You are several kinds of amazing!

Samantha -
You cannot be me when you grow up. I am already taken. You'll have to be you. (-:

Hi ,
Thank you for the information.Nice blog.
A golden blog for judo fans