This is the foreword, I wrote for Steve Scott's upcoming book, The Juji Gatame Encyclopedia

When I was young, two-time Olympian Pat Burris gave me this advice,

“Always go for the arm bar, because even if the referee doesn’t give you the win and makes you stand up again, for the rest of the match, you’re fighting an opponent with one working arm. And, Annie, if you can’t beat a one-armed opponent, you really suck.”


(Just so you know, you have to be in two Olympics and older than me to call me “Annie”. Don’t even think about it.)

I took Pat’s advice to heart, as anyone knows who saw me on TV winning the Panamerican Games. The referees did not stop the match and made us get back to standing. Just as Pat predicted, my opponent was hampered by an injured arm and I won the match.

Enough about me (and Pat), what about Steve’s book? It is pure and simple everything you need to know about  arm bars. The section on exercises specifically designed to build muscles used in arm locks is just brilliant. Not only is it a good, safe way to teach beginners some skills, it’s also good for any athlete who was ever injured - and all top athletes are injured at some point - to have something they can do to build strength when they are not cleared for grappling.

My favorite part of the book, though, is the drills. To get good at arm locks you need to do tens of thousands of repetitions. Think about it for a moment, when you are trying a move that has the potential to dislocate an opponent’s arm, you are fighting a motivated individual. Often, there is just one second to catch that arm and to be able to capitalize on that one second you need to have drilled and drilled so it is almost an instinctive reflex. Let’s be honest, though, repetitions can get boring and no amount of a coach yelling, “No pain, no gain” at you can change that fact. Having a huge variety of drills and exercises allows athletes to train from different angles, at different speeds and for different situations. 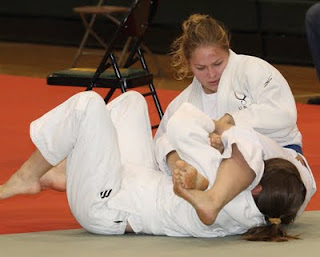 Anyone reading this book will benefit from the photos showing the techniques from every angle. If you don’t learn how to do a better arm bar from this, you’re beyond hope.

Email ThisBlogThis!Share to TwitterShare to FacebookShare to Pinterest
Labels: armbars

Any word on a release date for the book?

Shouldn't hurting a competitor be a genuine accident rather than a game plan?

I have read your blog (as in, I have read every post on your blog) and I think you are a rather nice person, and I agree on most of what you say here (believe me, that's not usual), but this point really bugs me.

Hurting people on purpose to win is not only lame, it's also cheating as it is against the rules (intentionally causing injury is hansoku make, #26 &27 in the rules).

Of course, it's impossible to prove that a legal arm lock "gone bad" was done with the intention to hurt rather than just an accident, you can easily get away with it... but it's still cheating.

I don't pretend to tell you what you should say, but now that you are no longer competing and are not so intimately involved with it, perhaps you could reconsider the issue.

If someone intentionally breaks the arm of one of your daughters, would you be all right with that? Could you go over to her opponent and say: "nice win"?

Would you say that damaging an opponent's arm on purpose is legitimate in judo and that we should advise it?

I like Juji Gatame as much as the next guy, and if an opponent doesn't tap, that's his problem.

Doing Juji gatame with the intention to hurt or disable your opponent is a different matter.

I am not saying this to blame you, but it honestly bothers me to see that someone I have come to admire thinks "it's alright".

According to Kano, we judokas should try to become masters of these two things:

Seiryoku Zenyō: Maximum efficient use of energy
Jita Kyōei: Mutual prosperity for self and others

You're carrying a high ranking belt (and a high responsibility with it) so you shouldn't be needing any advise on this.

Hurting and injuring an fellow judoka just does not fit into the spirit, principles of rules of judo. If you disagree, maybe you should give your judo belt away and concentrate on being the coach of something else, maybe "grappling to hurt-do".

First you have respect for someone. Then, one day, all the respect is gone. Such a shame.

I just quit reading your blog and won't recommend it to anyone anymore.

Hurting someone purposefully is the lamest way to win in judo, if anyone even calls it winning? I believe any judoka that has had a good sensei knows this in his or her heart.

I hope that we will still have judoka like Mohamed Ali Rashwan in the future. A true sports hero and a true judoka. Read if you don't already know the story behind Yamashita - Rashwan olympics final:

Come on seriously, it is competition. she isn't talking about hurting people in life or practice. She is talking about doing armbars in a sport where you win by slamming people into the ground, choking them out or by armbar.

Unknown here. (My name is Sylvain, but for some reason, I appear as Unknown)

Anyway, it's competition and competition has rules, one of which being that you should not injure an opponent on purpose.

Violation of this rule should result in disqualification.

Competition doesn't mean everything goes, and it is not reason enough to discard basic Judo principles, quite the opposite.

Judo is a way based on two foremost principles: Maximum efficiency and mutual benefit.

When you defeat someone, in competition, you show him his weaknesses and you give him an opportunity to test his skills honestly, which is why competition benefits both judokas.

When you injure someone in competition, the net result is that this person will not be able to train, and will regress, not to mention the obvious fact that an injury sucks.

In other words, through your actions, his life is made worse and his skill diminishes.

That's not what judo is about.

Hey Annie,
You seem to be happy that you won the Pan -American something, but not sorry at all that you injured your opponents arm in the process. I hope the injury was an accident and the arm healed properly. Medals are just metal, but we need arms and friends for the rest of our lives.

Judo was created to be a fighting sport where you can test your skills, use full force and defeat the oppnent. And you can do it with minimal risk of injuring each other. Let's keep it that way.

If you don't pull on an armbar hard enough to hurt them, why would they tap? If they have no incentive to tap, why apply any kansetsu waza at all?

Hurting your opponent is absolutely a part of Judo. Leaving them no choice in the matter is against the spirit of the sport. The PanAm opponent had the skill and the time to know she was risking injury by not tapping. It was her choice to allow the injury.

You guys DO realize that competitive Judo is called shiai for a reason right? And you know what the word shiai means?

The plans are for the book to be published in mid-2012. The goal is to have a comprehensive book presenting solid, core skills and fundamentals on why and how juji gatame works. I think this book will be the first to show juji gatame in a logical and systematic manner that will make teaching it and learning it more effective. Another goal is to have a good reference book on a lot of functional variations that work in real situations. Juji gatame is a versatile technique and there are dozens of ways to get an opponent into it. We also have a lot of informaiton on defense adn escapes as well as traps and levers (controlling and prying the opponent's arm). A good idea is to check in on the Turtle Press web site.
Steve Scott

I NEVER cheat and I always give a person a chance to give up, which is what the rules require. I also never went out with the intention of hurting my opponent. I went out to win.

In that particular match, what happened was, she was ahead. She had thrown me and if she could have held out for the rest of the match, she would have had a gold medal instead of me. This is exactly why Natacha didn't give up. I would have done the exact same in her place.

In fact, my daughter WAS in the exact same situation a few years ago. She got arm barred. She didn't tap. Her elbow was dislocated. She was ahead by a yuko. The only difference was that Ronda did manage to keep her opponent from pinning or throwing her and she won the match.

I did not think her opponent did anything wrong. I told Ronda she should have tapped instead of let the woman dislocate her elbow, but she said, "You wouldn't have" and she was right.

"I NEVER cheat and I always give a person a chance to give up, which is what the rules require. I also never went out with the intention of hurting my opponent."

Thanks for clarifying that point. Your post made it sound intentional, which is what I objected to.

Of course sometimes the opponent doesn't tap. It's his choice, and it's a choice I can understand - what a dislocated elbow compared to thousand of hours spent training to win?

"I also never went out with the intention of hurting my opponent. I went out to win."

That is the greatness of Judo!