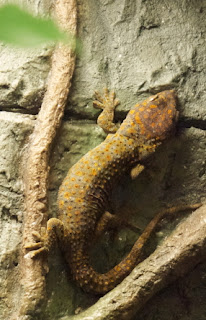 A couple of weeks ago, I mentioned that I had run a warm-up where, coincidentally, every exercise was named after an animal.

The first one was the "shrimp" which is an exercise that is the exact same move as you would use when escaping just before someone pins you.

The next exercise is the "gecko". Geckos are kind of cool. Notice how they can just hang out on a wall or a ceiling. That requires some serious balance.

Judo requires kinesthetic sense - the ability to coordinate motion and your position in time and space.

I have students do a number of exercises that develop kinesthetic sense, including the gecko. Not only does this exercise develop coordination but it also strengthens muscles you use extensively in judo.

As you do this exercise, you'll feel it in three areas.

The first set is the leg muscles used in bending when you do a throw such as ippon seoi nage (one- armed shoulder throw). There are a LOT of throws in judo that require these muscles.

The second set of muscles you'll notice using are in your forearms, the exact muscles in your arms that get tired when you do a lot of gripping. The third set are your biceps, the muscles you use in throws such as o soto gari (a major outer leg sweep), where you are pushing your opponent's weight backward on to one leg just before you knock that leg out from under him (or her).

Here is the gecko. Start out with your arms shoulder width apart, one knee up close to your elbow and the other leg straight, as shown below. 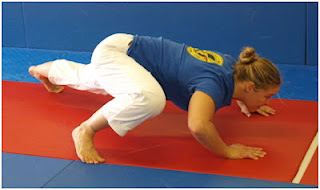 Do a push-up and spring forward at the same time as you switch your legs, bringing the other leg close to your elbow and straightening out the leg that was bent. 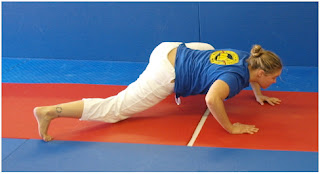 Yes, I do know that geckos do not do push-ups. I called it the gecko because the way you move your legs reminds me of geckos. Ronda calls it the spider-man push-up.

Try it. It's not easy at all. It may not give you super-hero strength but it will definitely make you stronger and develop your coordination.

In addition to calling them Spider-Man push-ups, I've also heard this exercise called Alligator crawls. It's a pretty wacky exercise, and definitely tougher than one would think.

The types are indigenous to destinations of the Indian native Beach, especially Madagascar and Mauritius.