More than one way to get an arm bar: With pictures

This is what I call the Sneaky Armbar Drill. Since I made it up, that is the name.

Continuing from my previous post, here is one way to get an arm bar even when your opponent is deliberately avoiding being arm barred. 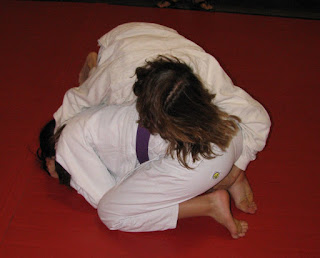 Step 1: If you have arm barred a lot of people, your partner may react on the mat by getting into a turtle position, pulling her arms in tight. Push down on her head and reach as far as you can between her legs. Grab her belt, or bottom of her jacket. When doing this on a partner without a gi, grab the inside of the leg. 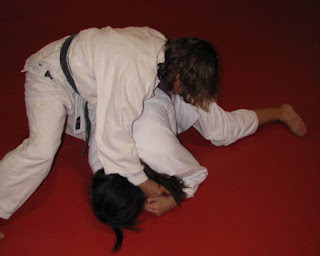 Step 2: Pull the head toward you, while pulling up on the partner’s belt, gi or leg. 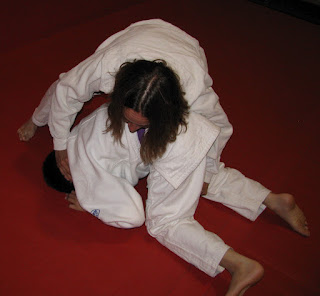 Step 3: The opponent feels confident he can stop this turnover attempt, all he needs to do is get a more solid base by spreading his legs a little further and putting an arm out to stop it, as shown above. 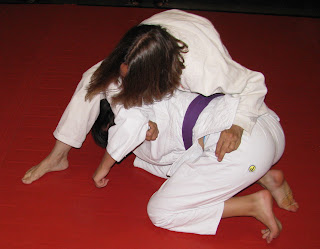 Step 4: Notice how close my hand was to that arm ... when the opponent makes even a few inches of space, my hand slides right under his arm. At the same time, my near leg is coming up so that he is blocked turning in one direction by the leg against his head. My other leg, on his opposite side, blocks him from moving in the other direction. Notice something else, my body is on his back just a few inches from his arm. 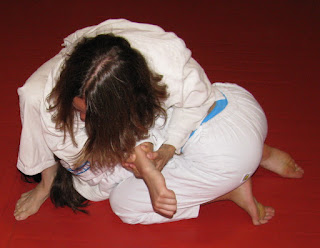 Step 5: I grab the opponent’s wrist with my other hand while sliding up the hand hooking the arm so I have two hands grabbing the wrist. I am about to lock his arm against my chest, which is just a few inches away. Step 6: I throw myself backward, keeping a tight hold of the arm with both hands. Note that the picture above was taken AS I WAS FALLING and both legs are already coming together with his arm between them. My right leg was in the correct position from the time I stepped over in the previous picture. Since his arm is locked against my body, as I fall backward, his arm is going to come straight. 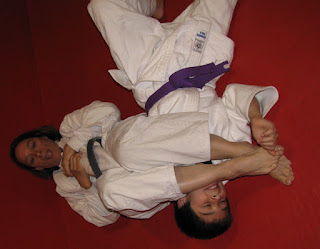 Step 7: Here is how it ends, with his arm locked against me, knees tight and me arching my hips to execute the arm bar.

A very polite young man at Hayastan Martial Arts, where I was visiting tonight, asked me,

"But Sensei, realistically, if you were doing this in a match wouldn't he grab his other arm and stop you from arm barring him?"

That is a good question but the answer is, "No". There are three reasons.

First,  he is not thinking about being arm barred at the moment. He isn't feeling threatened at all. He's just thinking this isn't a very strong turnover attempt and is feeling confident he can get out of it easily, just by putting an arm out to stop it. I'm ready and waiting for the arm bar attempt and the opponent is not.

Second, I have the advantage not just of surprise but of distance. My hand is closer to his arm than his other arm is. At Step 3, when the opponent posts an arm, my hand will be about four times closer to that arm than the opponent's other hand is AND I know I'm going for that arm and my opponent doesn't. That's a pretty big advantage to overcome.

Third, I am moving my hand and leg simultaneously and the SECOND that I get that arm, I am pulling it even further away from the opponent's other hand, with my foot on one side of the head and my knee on the other side of the opponent's body slowing resistance.

It is all very sneaky.


Thank you very much to Dan McNair for taking the pictures, and to Adam Sanchez of Barstow Judo and Eileen McNair of San Gabriel Judo for being my victims, um, opponents.

That's very sneaky. And by "sneaky" I mean really cool. I'll have to give it a shot.

I gave it several shots during newaza randori tonight and people DO tend to leave the arm out. The drill needs some work on my part because it was the first time I had tried it, but it worked several times and was pretty close for many of the others. Definitely one that seems to suit me. Thanks for the new technique :)