What does judo have against arm bars? 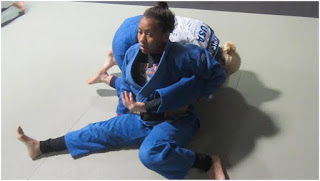 There has been a lot of talk lately about arm bars and judo, in part, I think, because Ronda has been taking arms like there was a bounty on them. Two of the dirty little secrets we judo people don't like to air in public are:


It's considered not as "good" to win on the mat as by throwing someone. I've had lots of people say "AnnMaria's judo isn't very good. All she did was win on the mat."

Yes, I'm not very good, all I did was win a world championship and some other random stuff. Someone criticizing the way I competed once said to me,


"I've never seen you throw with uchi mata or tai o toshi in your life. THAT's real judo. What do you call that rolling around on the ground you do?"


"I call it winning, asshole."

The fact that there wasn't one is not the ONLY reason I did not win the Miss Congeniality award of the judo team.

Most clubs don't spend nearly as much time on mat work as they do on standing techniques with the result that they aren't nearly as good at it. I've written a lot of posts on this, including this one, Matwork Bottom Line: You do too few techniques and you're too slow.

Not only are most judo players not particularly good at mat work but they really suck at arm bars. The reason is that Americans aren't even allowed to do arm bars in competition until they are seventeen years old and a brown belt. In some local and regional tournaments, you can't do arm bars until you are a black belt. I've even been to tournaments where arm bars are not allowed, period.

I once was visiting a very large, well-respected judo club and they asked me to teach but said,


"Please don't do arm bars. We don't want to scare anyone away."


I taught a roll over choke. Later, the instructor told me they would prefer I not teach dangerous techniques to their white and green belt ADULTS!  He was very nice about it, I must say.

Ignoring all of this, I have taught arm bars to kids for years. 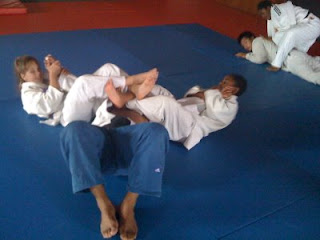 My point is that if you are planning on taking up judo to learn arm bars, do a little research on the judo club before joining and see if that is something they even encourage.

Personally, if you live in Los Angeles, I'd recommend two places where you could get better arm bars. It is not that these are the only clubs teaching arm bars but I'd say they are both known particularly for their joint locks.

One is Hayastan Martial Arts and the other is from  Richard Elizalde.

As I mentioned to you on twitter last night, I used that roll over choke at judo class last night when we were drilling ground work. I was surprised at how fast my partner went over.

Is there a rationale behind the anti-ground bias in US judo? Or is it more because the standing seems to be a lot more difficult to master than ground technique (Not that ground work is easy by any stretch of the imagination)?

One reason might be that standing technique relies less on strength than timing. People who don't want judo to be a sport may be put off by the greater physical element in mat work

Well said AnnMaria! As you know, I've been an advocate of armlocks (especially juji gatame) for many years. I have always believed that making an opponent give up or surrender to me (or to my athletes) is an "up close and personal" way to win. Sure, throwing someone is really great, but making him/her give up is really beating them. If you make an opponene submit to you, he will never forgive you and will never forget you. You will always be that person who made him quit and surrender and that will give you a winning edge if you ever fight him again.
On the other hand, there are simply people out there who are so totally sucked into thinking that groundfighting is less skillful than throwing. Recently, one of my athletes beat a guy with a juji gatame. After the match, the opponent told a member of another local judo club that "if that guy hadn't of armlocked me, he wouldn't have beat me." Whew...wake up dummy! He armlocked you...he beat you. He didn't need to throw you and(in all honesty) he wanted to stretch your arm and make you give up.
Ronda using Juji Gatame with such skill in MMA is doing more good for exposing the public to real, effective judo than anything ever done in the United States. By the way, JUJI GATAME ENCYCLOPEDIA is sitll in the hands of my editor and we expect a mid-2012 publication date. Hopefully, it will help in spreading the word about armlocks.

Standing technique relies less on strength? Wow. I'm definitely doing many things wrong then. Either that or use of strength is a natural evil of the 100+ kg category.

Hey, Steve -
Someone said the same thing recently about Ronda - I was winning until she beat me !

I think the reason why throwing in Judo is more encouraged than submissions on the ground because it's exciting and easier for the regular fans to understand. If someone throws someone and he or she lands flat on the back people knows it's a win, but if two people rolls around on the ground and a choke or an arm bar is suddenly made, people might not know what just happened. I personally think it's more slick and crafty if a person can execute an arm bar or a choke and force a tap out.

At the middle school I worked at in Japan, the students were only allowed pins and chokes.

I just wanted to drop a short thank you note for your time at the WCTC Clinic last Sunday! My son, Mitch, had a great time and we really appreciate you and Ronda taking time out of your busy schedules to teach our kids. Now that you're back in town, we'll look forward to seeing more of you on the weekends :)

No problem, Mike. We really had fun. Sorry we had to run but it was Julia's birthday and we were meeting her and her friends for dinner.

Bottom line JUDO is the parent sport of bjj!

Long after Mytsuyo Maeda
(Dr. Jigoro Kano's student) traveled world wide and fought over 1000 fights without those fights being sanctioned by our present governing bodys for JUDO, Maeda gained a wealth of knowledge testing Dr. Jigoro's teaching's and really putting to the test JUDO as a self defense art, and presented the art to the gracies as JUDO not bjj, it was only because Carlos & Helio Gracie was frail and their body's could not stand the stress of being thrown they developed their own particular style of fighting (BJJ)which by the way not all the gracies have the same styles of fighting, which is what sensei demars did after her knee injury she transitioned to mat work cause she could'nt do alot of the throws she use too, NOTHING WRONG WITH THAT! it's still JUDO! everyone developes their own style of Judo all dependant of how frail or strong,short,fat,skinny,injured, for sport,competition or self defense,JUDO offers alot to everyone as long as you keep an open mind...it is the foundation where everyone will branch off into their own styles.

I'm forever thankful that sensei Dan Alef had us on the mat 50% of every practice , if not more, sometimes. Being a wrestler, I never thought winning on the mat wasn't "real". Sure, an ippon throw is great, but so is a choke or arm bar. Heck I dug pinning, too.

I'm forever thankful that sensei Dan Alef had us on the mat 50% of every practice , if not more, sometimes. Being a wrestler, I never thought winning on the mat wasn't "real". Sure, an ippon throw is great, but so is a choke or arm bar. Heck I dug pinning, too.

Hey, how is Dan doing these days? I got an email from him after Ronda's last fight. I remember she used to work out with Bryson Alef back in the day.