(No, I am not on vacation, I am working on The Book - well, it actually has a title - Winning on the Ground - and Jim said to use some of his coaching columns he had published in the past instead of putting up too many sections of the book because why would people buy it if they could read everything here for free. That is why the second chapter is called Ten Matwork Secrets. And there are eleven of them. (The eleventh is double-secret, I guess.) So, here is a guest post from Jim.
P.S. The guy in that photo with the black eye, Roman Mitichiyan, is fighting May 5 at the Hollywood Casino.  If you live anywhere near LA, you should go and cheer him on. )

Most people use the word “coach” when they are describing themselves.  Many of these people don’t fit the concept I personally have of what a coach is.  They don’t really differentiate between a coach and a teacher. 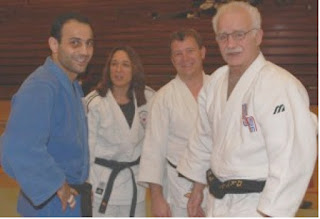 First, I believe you begin as a teacher.   The two roles of coach and teacher are very different.  You could be a very good teacher and not so good as a coach, or vice versa.

A good teacher desires for each and every student to get better.  A teacher recognizes that each student is different and will grasp things at different times.  Some students take a lot longer than other students but they all at the end should end up at the same place.  Be patient.

I believe in teaching a lot of different techniques and allowing my students to work on the techniques that come easy to them so they can practice what is right for their body types and their athleticism.  I personally don’t want all my students doing the same things, or doing the style of judo that I did unless it fits them personally.

As a coach you should know the contest rules extremely well.  Most coaches argue at tournaments about things that they can’t win because they don’t know the rules.  An effective coach knows when it is reasonable to challenge a call and when it isn’t.  If all three officials agree that a player scored for a yuko and you think it was a waza-ari, odds are pretty low you are going to win that argument.

However, if your player throws with an o soto gari and the referee gives it to the opponent by mistake, that is an argument you can win and you should be challenging the score.  By the same token, if a referee makes a mistake in the rules, such as gives a player a penalty for not attacking after five seconds, you should challenge that.  This requires that you know the rules as well or better than the referees.

In order to be a good coach, you have to be learning all the time.  Not only do your players have to get better, but you should try to improve yourself daily and constantly learn more about judo.  Read books on coaching, watch videos or DVDs, go to other clubs and watch their practices, attend clinics.  In short, never miss an opportunity to expand your knowledge.

You should also be able to watch other players and figure out what your students have to do to be able to beat them.  You have to know how to motivate your players so they are working at the best of their ability.  Most coaches make the mistake of trying to be their student’s best friend.  You are not their friend; you are their coach first.  It’s easier to be the ‘nice guy’, to always tell people what they want to hear, that they are training hard enough, they don’t need to lose weight, they are great just the way they are and the competition will never be able to beat them.  Even though you may become popular, patting your athletes on the back and taking them out for ice cream, that is essentially a selfish way to be.  If you are their friend first, you can’t make the decisions you need to make in order for them to reach their full potential.  Therefore, you are thinking of you first, not your athletes, and you will never succeed.

Right on ! Love the coaching blogs you have been doing lately. Most commonly mixed up concepts...instructing vs coaching...The other paradigm I see alot in judo is that a great former competitor automatically becomes a great coach.

I agree that the move from competitor to coach is not a direct step. Justin Flores commented that while he was a black belt level competitor, when he retired from competition and started coaching he was a white belt level coach. I think that realization probably contributed to him eventually becoming a really good coach (which he is today)