Most of my life now is spent running statistical analyses for clients or working on our latest product. However, I took out a couple of hours to go over to Gompers Middle School and teach judo. As you can see from the pictures, the students are coming along nicely.

I am always harping on thinking about your mat work from the very beginning. In particular, I'm always saying that your mat work begins from the time you get a grip. Here is another example from my wonderful students at Gompers Middle School. 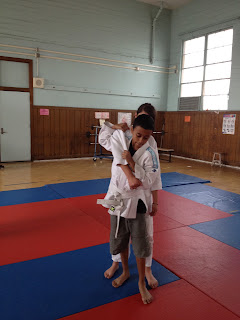 Step 1: He starts standing and does a one-armed shoulder throw. His partner blocks it. Notice where his left hand is in this picture. 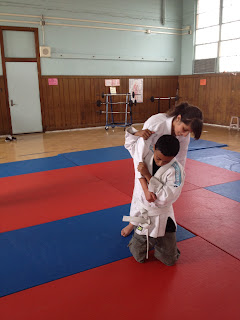 Step 2: Unable to get his opponent with the first attempt, he drops to both knees for a double knee  shoulder throw. 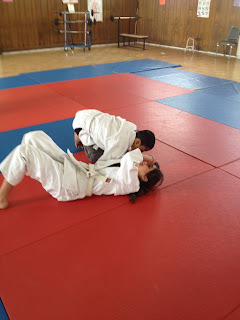 Step 3: He completes the throw and immediately .... goes to 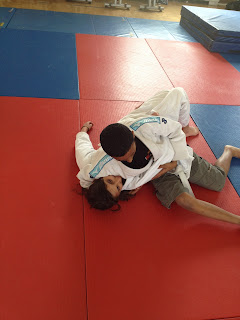 Step 4: A kesa gatame (scarf hold) pin. Note where his left hand is in this picture. Did you notice that is in the EXACT same place as in Step 1? He has a grip on her right arm and he also has it trapped under his arm pit. Now notice where his right arm is in THIS picture. 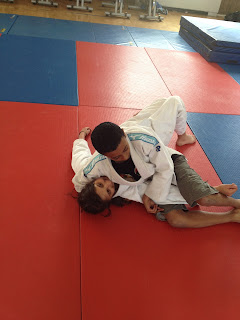 Step 5: If she pulls her arm down from his arm pit and it is straight, he is going to hook at the wrist with his left leg and arch his hips to apply the arm bar. 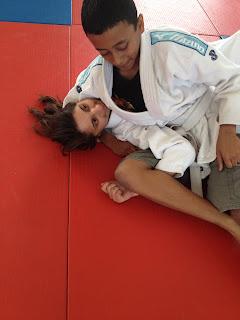 Step 6: If she pulls away from the first arm bar, bending her arm to keep him from arm barring it, he is going to hook her arm with his right leg. He just needs to lean forward a little to bend her elbow at an unnatural angle and have her tapping.

I wanted to point out where his arms were in this move because it illustrates an obvious point I see people forget in mat work all of the time. That is, don't let go of what you have until you have something else.

A second important point is - don't stop. Notice how this move goes from one throw, to another throw, to a pin, to an arm bar to another arm bar.

For people who have asked about how well judo translates to mixed martial arts - well, to be honest, some techniques do and others, not so much. This particular technique, you could do exactly the same without a gi. You would just grab the opponent's arm instead of the jacket.