Defensive matwork drills round the bend

The Book is scarily close to done. So much, so that we are scheduled to head up to the Black Belt studios for a photo shoot in a few weeks. In reviewing our outline, for no good reason at all, I realized there are the drills we have not included in the book yet.  Four of these are defensive drills, starting with the two below.

Defending on the mat can win you a match, especially in judo, but also in any other sport with grappling where it is possible to be ahead on points. 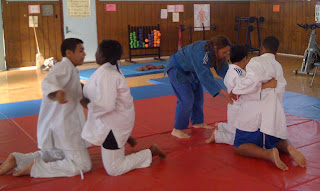 Matwork defense is a skill you need to learn and here are two of the drills to teach it.


Defensive drill 1: Eat up the clock

Here is the question I ask my students:


You are ahead by a yuko and in this position on the mat. There are 30 seconds left on the clock. What do you need to do to win?

The answer is simply that you need to not  lose - not get thrown, choked, pinned, arm barred or get two penalties after the referee stands you up. There is no stalling penalty on the mat. All you need to do is stay on the mat, eat up the clock and then you are the winner. Of course, if you just fall flat to your stomach and don't do anything, the referee is going to stand you up. The point of the drill is for you to attack the opponent without taking any chances. If the opponent is attacking you, you want to defend enough to keep from losing the match, again, without taking any chances.

This drill works for both defense and offense. If it so happens that you are one of the stronger players in your club, you should be the person who is "losing" most of the times that you do this drill. It will give the weaker players a chance to "win" if they can hold you off, and make you better prepared for when you are in the situation when your opponent is just trying to eat up the clock.


Defensive drill 2: Get out of there!

Here is the situation - you are in a match with someone so much better on the mat than you that if you spend thirty seconds down there, they ARE going to beat you. Your whole goal at this point is simple - get off the mat. Don't be a hero, just stand up anyway you can.

This is also a good drill for the other person because if you are really good on the mat, people will do anything to avoid being there. We have seen people get up from the ground and literally run away from the opponent they were so scared. In this drill, if the player who is supposed to get up manages to stand, the other player loses.

Like the first drill, this is a good one if you have players who are somewhat mismatched, because it gives one player, who could perhaps never beat the other on the mat, a chance to “win”. It also forces the player who could normally win in matwork to work harder to win at the drill.

Bingo! You have eight different situation drills.
Posted by Dr. AnnMaria at 11:59 PM