You know why old people are cynical? It's called "experience".

If every person who said to me,


Oh, you volunteer at an urban school. That is so great. I'd love to help you out.

had actually given me a dollar, I wouldn't be paying for the extra mats and crash pad this fall myself!

About once a year someone like the people at FightChix who sent t-shirts (thank you!) and Jim Pedro, Sr. who donated his share of the advertising revenue from this blog (also thank you!) follows through and actually gives anything to the program.

Well, that's not exactly true - when the judo class started years ago, I sent out an email and posted on this blog asking anyone who had an extra judo gi to drop it off. Many of my former students did, as well as some other generally nice people.

As a general rule, though, people mostly complain about how bad education is in America, run down teachers and schools and don't do a damn thing to help.

It's been a few years, and the gis, which were already used when donated, have gotten a bit ragged. Whoever gets there first gets a gi in his or her size and the rest end up with one too small or too large, but hey, we manage. The kids work hard, we have water, snacks are provided by the Woodcraft Rangers after-school program, school staff volunteer. I can't complain. It's a good program. 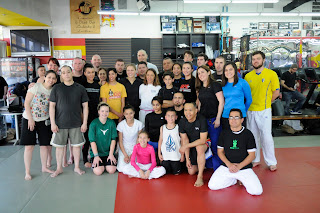 Let's go back to the clinic Ronda did to raise money for Didi Hirsch a few months ago (and for which Blue Cotton donated shirts - thank you!)

The tickets were $200 each but one spot at the clinic was raffled off as part of the fundraiser for the West Coast Judo Training Center. The person who bought the winning ticket was Jesse Moya of Moya Brand gis.  He's that guy in the right front of the picture. He said,

"Oh, that's so great you volunteer at a middle school. I'd like to help."


I'm sure I made some polite noise while thinking to myself I'd never hear from him again. So, I was very pleasantly surprised when Patti Ochirino (also known as Bradley's mom) gave me two judo gis at the next practice, saying they were for the kids at Gompers. We gave them to two of the students who had been in the program the longest. One is a graduating eighth grader who has been taking judo for two years. I thought, well, that was nice.

SO ..... Jesse contacted Jose Gonzalez, the teacher at Gompers who sponsored the judo program (we need an LAUSD teacher on site to supervise - he has done this for four years without pay). He got every student's name and size and showed up on Friday with a new judo gi for each student. 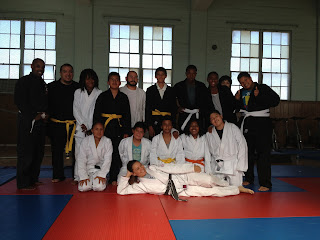 So, thank you to Jesse Moya and Moya Brand! Thanks to you, I am a little less cynical today.

Email ThisBlogThis!Share to TwitterShare to FacebookShare to Pinterest
Labels: Gompers