One size definitely does NOT fit all

On Sunday, there was a judo tournament, so many of the usual suspects were not at practice until later. The first hour and a half or so was just Scott (an adult novice, north of 200 pounds), Christian, a purple belt weighing around 70 pounds and Elias, his little brother, who is a about 40 pounds on a  heavy day.

(Apologies if I didn't get the weights exactly right. This is not the LA County Fair and I am not the weight guesser guy.)


In such a situation, what you should NOT do is try to teach everyone the same thing. For three hours, we went through different moves for different people (we were eventually joined by Liam, later by Blinky and I don't know who came after that because I had to leave).

We all did ko uchi makikomi, although I do think it was a better move for the smaller people. We did it both right and left. We all also did that drill showed on the Armbar Nation site with Julia where they run back and forth doing uchi komi. That is really just a conditioning drill and everyone can get in a little better shape.

Then, we did a sacrifice throw into an arm bar. While each person tried each variation - and here Christian is doing the variation I asked Scott to emphasize. 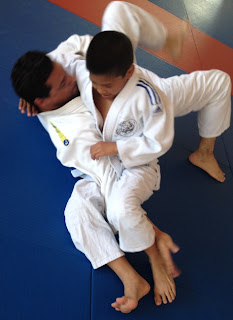 The way I usually do this move, is I do the throw, do a backward roll as I do it and land ON TOP of my opponent.

Now Scott, as I said, is a good 200+ and well over six feet tall. As I unnecessarily pointed out to him, Olympic gymnast material he is not.  So, when he did the throw, I had him do  the arm bar as demonstrated above, where he threw his opponent with a sumi gaeshi . There is a nice video of how to do sumi here. We did not actually do it that way on Sunday because that is a bit more advanced. We did it for people who we bent over stiff-arming you.

So ... Scott did the sumi gaeshi to the arm bar.
Christian did a drop seoi nage to this same arm bar.
Elias just did the throw to the pin.

Too often I will see coaches who are 5 foot 1 (a perfect height, by the way) who teach everyone to do a drop shoulder throw because that is what they do.

Oh, yes, check out my book of matwork tips and techniques which did not include the one above. Maybe that will be my next book if enough people buy this one.

If not, I guess I'll write my next book on statistics, which would be okay, too.
Posted by Dr. AnnMaria at 10:34 PM

Oh how nice it would be to learn judo from you! As someone much like Scott, I must say it irritates me greatly when my 160 lb, lightning-fast sensei tries to teach me to do his style of judo...