Celebrity has its costs and one of them is learning how many real creeps there are in the world. Just about every week, it seems, a new website pops up claiming to be "Ronda Rousey's official website" and selling merchandise with her name, autograph and/or picture.

In case you are wondering, here is her real website rondarousey.net .

One things that makes these people even bigger dirt bags is the fact that the only autographed stuff Ronda ever has for sale is auctioned off on ebay and the proceeds go to charity. Here are a few that benefited this year:


Ronda's lawyer contacts these fake sites whenever they pop-up and sends them a cease-and-desist letter that basically says if you don't cut it out we will sue you.

Here is where the nice Fight Chix people came in, who are definitely not dirt bags but were selling a shirt that said Ronda Knows 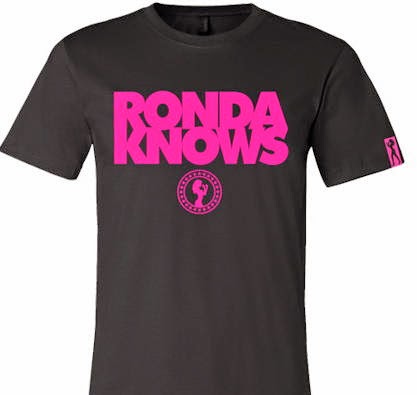 They had started selling this a while ago and they intended it to be a way to promote Ronda and women's MMA in general. They also more than once sent gifts to Gompers Judo which they funded from the sale of the shirts and were MUCH appreciated. Each one even had a handwritten note of encouragement, from Elizabeth, one of the co-owners, which was really sweet.

In the meeting where trademark violations were discussed (yes, we actually have business meetings). Ronda said,

"Be sure you send those people a nice letter."


They did not get a nice letter. They got the standard one that says cut it out or we'll sue your sorry asses (but in legalese). So, Elizabeth called me up to find out what was going on.

In short, Ronda gets paid by companies to use her name and image. If other companies are using it for free, it is reasonable that her sponsors like Xyience or Hatashita Sports or other future sponsors would demand to know why THEY have to pay. Just trust me that there are very good reasons for trademark enforcement.

Which leaves Fight Chix with 17 shirts left in inventory that they are not allowed to sell and supposed to destroy. Elizabeth and I talk it over and come up with this idea - she will send the last remaining shirts to me, Ronda will sign them and we will sell them off and give the money to Gompers Judo and St. John's church.

I do have a question for you, oh blog reader.  Elizabeth and I were thinking that it is too bad the stuff at auction often goes for more than the average fan can afford. We thought maybe put the shirts up at a fixed price, like $100 and limit one per person. I don't know what a reasonable price would be but I know the regular UFC shirts are $30 and that doesn't go to a charity and they aren't autographed and there are more than 17 of them left for sale in the world.

Opinions on that? Should we sell them off to the highest bidder, since it's for charity, or just do a fixed price thing? Or do you have any other ideas?

It's going to charity. Sell them to the highest bidder.

I bought the RondaKnows shirt for Ronda's UFC debut and I wear it to all the UFC fights I watch. Several people have asked me where I got it and I became a little curious about how Ronda and her team felt about it. I think the remaining shirts should be auctioned for charity because a "fan" might buy it and then resell it for profit. Either way, continued success to Ronda and Fightchix!

Hi AnnMaria,
There is something fun about selling things on Auction. That's why people love Ebay.

I would auction them. That way people who really want them will bid for them.

Or you could fix the price for some and auction the others...

While i appreciate and respect the other blog readers point of view on this matter...i think you should give first dibs to the first 17 blog readers at $100...limit one per reader.
Now there is a good idea

Judge DeMars..
If it please the court...I am officially requesting the purchace of a "Ronda Knows" shirt now!

Kindly bear and watch this video. Maybe this girl can give Ronda problems in the cage: http://n5e.interaksyon.com/videos/C2B95005C6CF4E2/sapul-sa-cctv-babae-ginulpi-ang-riding-in-tandem

Even though I'd gladly buy one at $100 with the knowledge it's going to charity, I agree that the highest impact might be done by selling to the highest (17) bidders. Selling them at $100, they might get snapped up in a second by people who will "scalp" them and turn around and sell them for even more, and then that money goes to a dirtbag instead of the charity.

It is very conscientious to think of the fan with less disposable income, however. :)