Beijing - the cat, not the Olympics 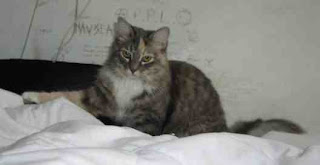 or, How I almost got divorced, the cat almost died and then life returned to normal

Disclaimer: For those of you who read this blog for information on judo, there is not much of it in this post except for tangentially and, of course, the required judo tip at the end.

When you marry a man later in life, in my case, when he was 42 years old, and especially if you are his first wife, you need to realize that he is what he is and not go into the deal expecting to change him. My husband is a brilliant guy. He has his share of faults, primary among them being that most of life passes him by without notice. Think of Bill Gates with no ambition and you pretty much have Dennis. Even without ambition, he is brilliant, and he is no doubt much easier to get along with than Mr. Microsoft, plus we have cooler computers. Generally, life is calm in the DeMars household. Besides that, I believe that home should be calm. There is enough stress in the outside world that you need a place where, as Robert Frost said, when you go there, they have to take you in. All of this preface is to make you understand that it takes a lot for me to yell at my husband.

Well, Saturday we had six hours on the mat at the West Coast Judo Training Center. First, we had conditioning practice, then two hours of the Nanka Shorai Games, then another 2 1/2 hours of technical and randori practices. Then, since the trip to the training center in Tijuana was canceled and the kids were understandably disappointed, I took Julia and her friend from the training center, Denise, to race gokarts and play arcade games. By the time we got back to the house, I had been gone for twelve hours, stood out in the cold to get on the gokarts, and was cold,stiff and tired.

"Dennis! The cat is bleeding all over the house and you sat here for twelve hours and left it for me to take care of when I got home! What the hell is wrong with you?"

He said (and I swear I am not making this up),

"I noticed the blood on the sheets but I figured the vet was closed on Saturday."

There are several things wrong with this picture:
1. We have had the same vet for 11 years and the vet IS, in fact, open on Saturdays and located less than two miles from our house, about 300 feet, incidentally, from the elementary school that Julia now attends and that Ronda and Jenn both attended. So, Dennis has driven by that vet several hundred times.
2. He didn't notice blood all over the house even though he had been home for the past twelve hours, when I noticed it in the first two minutes I walked in the door.
3. If an animal had bled on your sheets, wouldn't you CHANGE THEM????!!

I had some comments on this, which I will spare you, and the result was that Dennis looked on the Internet, found an animal hospital open on Sunday and promised to take the cat the next day.

On Sunday, Julia fought in the Nanka Novice tournament (where she fought her heart out and won her division), so we got up really early and left. SEVEN HOURS LATER, after Dennis has called three times (Where is the cat carrier? Downstairs in the garage. I can't find it. Look in the closet under the stairs. I went to PetCo and bought a cat carrier but the cat won't go in it. Maybe I should wait until you guys get home. Beijing likes Julia better than she likes me.)

By now, I have not had enough sleep for days, because work is very, very busy, on top of judo. Dennis has spent zero time with Julia all weekend and the cat looks like it is going to die for sure. I call my daughter Jenn and complain and she asks me if I am going to tell Ronda or wait until she comes back from Europe, because we all know that Ronda is very stressed out training hard, missing home and trying her best to gear up for the Olympics. I don't think Ronda will forgive me very soon if I don't tell her that her cat died. About every minute she is home she has that cat on her lap. It was the ONLY thing she wanted for her 14th birthday and she named it "Beijing" after the Olympics that she said she was going to win.

The day is not improving. Dennis comes home and says that the cat needed a blood transfusion, a test for a blood disease caused by parasites, a test for feline AIDS, a test for feline leukemia, about a dozen other things - and the total bill was almost $1,200. He handed over his debit card to the vet and paid it. (This is the point where I am starting to have second thoughts about divorcing him, because I don't think I would have done it. He said, he thought about not paying it but he knew how fond the girls were of that cat.)

So... I call Ronda and tell her what is happening and she starts bawling. It does not help that her father had a blood disease, had a lot of transfusions and died when she was little. Then she starts babbling about coming home and offers to send us payments or half the money or something if we would just pay for it, but I tell her Dennis already paid for it and animals, and people, too, will get sick whether she is here or not.

Dennis, in his second step away from divorce court, takes me and Julia to The Fish Company, our favorite restaurant, where we have oysters, crab, Mojitos, and Shirley Temples until we don't even care that Julia's tooth came out in the free taffy they give away at the restaurant. I cannot believe I have seen so much blood today and none of it was at the judo tournament.

The rest of the story.... work is better, I met my deadline today so I should be getting up from my desk the same day I sat down at it for the next week or so. As for the cat, unbelievably, she recovered and I brought her home from the vet today. She is eating again for the second time since I brought her home four hours ago, and she was on the bookshelf in the girls' room, so she at least had enough energy to jump up there. They are not sure what was wrong with the cat but the tests for those things that kill you came back negative, so they gave us three kinds of medicine to give her for the other three things it might be and we are supposed to bring her back on Wednesday. She doesn't look like she is going to win the cat Olympics today,but since, yesterday the vet said that her blood level was so low it was not normally compatible with life, the fact that she is eating, jumping up on bookshelves and walking around the house is pretty amazing.

This is contrary to what many of us have heard about, "Technique will beat strength."
I was watching a match from the Ontario Open (now called the Hatashita International) and I can hear the comment on the videotape from someone watching as Ronda throws for ippon with o soto gari, "That was just pure strength."
It's true, too, and I saw it again, in the same tournament. The other player came into o soto and Ronda countered with an o soto of her own and just slammed the woman. It was pure power. What Jason pointed out was, "And why not? That strength allows her to do those moves. When you both come in on o soto and one person is a lot stronger than the other, the stronger person wins." Of course, that assumes you have a decent o soto in the first place.

Get in the top physical condition you can BUT (and this is very important) don't do your conditioning instead of judo. Do it IN ADDITION to judo. I personally don't think there is a magic conditioning program. Get up in the morning and run sprints, do bench presses, curls, leg curls, squats, clean and jerk. Run distance to cut weight so you are not fighting a heavier division than you should. AND go to judo practice 10 or 15 hours a week. Doing that alone will pull you ahead of 90% of the competition and probably put you on the U.S. team. Keep a record. Otherwise, it is too easy to fool yourself into thinking you did conditioning every day when you just did it twice a week and thought about doing it the other days and watched the Today Show instead.
Posted by Dr. AnnMaria at 9:40 PM

Like most people, I think, I would alternate days for strength and days for endurance. So some days I would do 8-12 reps of different exercises and then do three sets of each, e.g. 8 curls, 8 bench presses, etc.

Other days, I would just do my maximum I could do six times. I was very fortunate to have a good strength trainer who set it all up and just gave me a program every week.

mom thank you for saving my cat and not divorcing dennis, he can actually be cool sometimes....
and my cat is cuddly, cuddlyness is a quality worth way more than $1,200

Why I don't understand is why Ronda lives with Mochi(her dog).I think that's how you spell it.But,completly forgot about her cat.