I Have Decided Not to Quit Judo Today 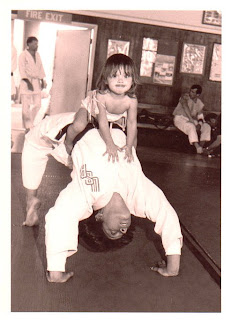 Even though I have a black eye, third-degree mat burn and ache in muscles I had forgotten I had

Yesterday, I was ready to quit judo. As my friend, Jim Bregman, once said,

"I know that there is supposed to be a normal curve for intelligence, but I can't help but feel sometimes that the population involved in judo is skewed toward the stupid end."

Someone had made the comment that my opinion could not be trusted on who would be appropriate for a particular training camp. It was then suggested to me by someone who is supposedly my friend that it was understandable why the camp director would respect other coaches more than me, as he did not know me and perhaps I should take a week off work, go to this camp at my own expense and coach for free so he could get to know me. My friend was actually surprised to find I was very offended by this suggestion. I will omit some of the choicer words, but I told him, in short:

"In other areas of my life, people treat me with respect. They call me doctor and they pay me a decent amount of money, and you know why? Because I have earned it through hard work and accomplishments. Why on earth (well, I might have used some other words) should I fly thousands of miles to impress some little (word deleted) who never did anything? Winning the world championships wasn't enough to earn his respect? Why? Because it was in the "girl's division"? Bringing up one of the best competitors this country has seen in decades, probably ever, was not enough? Why? Because she didn't succeed until she got a 'male' coach? Actually, she was number one in the U.S. before she ever spent a week away from home. I intend to spend my spare time with people I enjoy and that does not include arrogant little (other word omitted) who think what I have done in judo is not worthy of respect."

Do I think that anyone would have taken that attitude if I was male? I am absolutely certain they would not. Sometimes the sexism in judo, which is far more rampant than in most other areas of life in this country, really irritates the hell out of me (maybe I originally used some other words there) and I wonder why I even bother.

Then, I spent the evening reviewing videos of judo matches, because I had practice at the West Coast Training Center today and I wanted to be sure that we were focusing on what would be most useful for our players. As usual, I like to be overprepared and have way more planned than we can cover in one day, even with five hours of practice. I also keep a record of what we cover each week so I can be sure we are not being to repetitive, but, on the other hand, make sure we have a coherent plan. At the very beginning of this training center, one of the key weaknesses we identified in American judo is a general lack of combinations and counters, both standing and on the mat. So, that was our focus today.

My original plan was to do mostly drills in the dojo. However, there were only seven people who came for the first practice, and it was a beautiful day outside, after several days of rain in a row. So, we ran half a mile to the park, played several games of toilet ball, which ended with us all being covered with mud and then ran (or in some cases, walked) the half mile back. Raffi, who is usually ahead of everyone, was coming in last. He had been sick in bed all week, but got up and came to judo this morning. All of our young players worked hard and another dozen came in the afternoon for the newaza and randori session.

I got matburn practically down to the bone (thanks a lot Crystal!), got punched in the eye by my own nine-year-old daughter, and bent back one of my finger nails fighting Harout. Watching these players, I had a real sense of pride. It is great to see people like Victor Ortiz, Gary Butts, Frankie and Eric Sanchez on the mat both fighting and helping our younger players develop. The level of judo of everyone in the place has risen noticeably in just the few months we have been running these practices.

We are building exactly what I had hoped. The intensity in randori today was exactly what people need to move them to the next level in judo. We are building a technical base and their judo is improving. This is our first year and my goal is for our players to all win golds at the California state championships.

My second goal is for all of them to win gold at the Golden State Open in August, and at the USJA Winter Nationals in December.

We have some who will be able to attend the USJA or USJF Junior Nationals but, financially,that is not in the cards for everyone this year. Fortunately, next year the USJA Junior Nationals are in San Diego, and will these kids ever be ready!

So, thanks, guys. I have been in judo since God was a baby. I was thinking about quitting judo, but because you all inspire me so much, I have decided not to quit judo today.

(The baby in the picture, by the way, is not actually God, but my daughter, Maria, who is going to give birth to her own baby soon. She is much older now than she was in that picture.)
Posted by Dr. AnnMaria at 9:01 PM

THE WCTC sounds like so much fun! Even if it is a lot of hard work to be there!

It is too bad that we've nothing like it here in Roswell, yet...

You can come visit, you know. We have practice every Saturday, except March 1, because our players will be spread among three tournaments that weekend, one in Rhode Island, one in Claremont, CA and one in Norwalk, CA

Ronda is home February 23-24 and we have two practices the 23rd at the Training Center and then we are going en masse to visit Hayastan in North Hollywood on the 24th. You can even get your coach certification. You don't need a passport to come here from New Mexico. Contrary to popular belief, it really is part of the United States!

mom you know better than anyone that one of the things that drives me crazy feeling like due respect is never given enough.
I know how you feel and screw 'em.
I can't wait to start coaching at the West Coast Training Center after the olympics.
(that and bartending which I think will be really cool - and make a lot more money!)
You are a prime example of being the change you want to see in the world.
so don't let those chauvinist bastards get you down. The biggest compliment you can give them is letting their worthless opinions effect you.

I was just watching Celita Schutz site,wow I think doing Judo is very expensive in America.It is a good job to be Judo teacher professional,can someone get enough money from that?
I mean could be Judo your only job?
Grazie AnnMaria un saluto Ric

There are people who make money as a judo instructor. Judo can be your only job but you need to have other skills. For example, if you have a degree in education, you can teach judo at a community college along with maybe a class in conditioning and some other related classes. I know some who do this.

If you are good in business, you can start a judo school and run it as a business and be successful. I know several people who do this. You need to understand, though, that it is a BUSINESS. You need to market your business, provide customer service and be organized. The more you want to be o-sensei and have people bow down to you the less chance you will be successful.