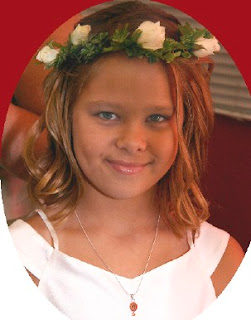 It was exactly a year ago, sitting in the Devils Lake Airport at 5:30 a.m, with a wind chill around 37 below outside that I decided,

I waited a few hours, called my partner and told him that in 2008, I was going to be doing something else. My new company, The Julia Group, is doing unbelievably well for having started exactly two weeks ago today. We offered our first on-line course yesterday, Autism for Early Childhood.

In addition to the not insignificant benefit of not being in North Dakota in January and not being awake at 5:30 a.m. anywhere, my new position has a cooler-sounding title - President - and more time to spend with my daughter, Julia. Even though I am working more hours than ever, I am home more often and getting to discuss all of the mysteries of life with a fourth-grader.

Tonight, Julia had just watched a movie directed by Tim Burton called "The Big Fish". She has odd tastes for a nine-year-old. I blame her big sister, Jenn, who was discussing, 'symbolism', 'obvious metaphors, and 'cinematography' in the sixth grade. I used a lot of words my mother disapproved of in sixth-grade, too, but those were different words and my mom disapproved of them because the nuns would call her and say, "Do you know what your daughter called Sister Mary Joseph today?"

Anyway, walking back from Ben & Jerry's after eating more chocolate ice cream than human beings ever need, Julia asked me if I ever had any adventures, like in The Big Fish. I said,

"No, blah blah blah. I mean did you ever have anything exciting happen?"

So, I told her about how her father and I had met on the Internet, back before MySpace or Google or any of those things even existed. He was the only person in Physics at the University of California who had a web page. I was on the faculty of a school in North Dakota and we got to emailing each other partly because email seemed a pretty cool new idea and no one either of us knew had it. It was supposed to be for people at universities to collaborate and we both were at universities. So, you could email random people and say, "Hey, I saw you have an email address and I am trying to find out..."

I was going to be in Washington, D.C. on business, and I asked him if he wanted to meet me for dinner. He bought a plane ticket and flew from Santa Monica to Washington to meet me in person. I asked her if she thought that sounded like an adventure. She said,

"Nope. It sounds to me like Daddy was desperate. Why would he do that? Why would you fly all the way across the country to meet someone?"

I told her that is a very important lesson in life - sometimes you have to take a chance. If you want to make your life much better, to have a change that is really great happen in your life - then sometimes you need to take a really big chance. She thought about this a minute and said,
"What if you had been really ugly and had a bad personality?"
I told her that was the chance he was taking. She thought about this for a moment and said,

"It still sounds to me like he was desperate."

So I chased her all the rest of the way home.

My point here about lessons, and this was just one of them on our walk, is that we need TIME to spend with our children to have these conversations, about the need to take chances, how you find a square root or why math is important. Both Al Franken and Margaret Mead, polar opposites on the comedy spectrum, said what benefits our children most isn't quality time. It's gobs of quantity time. Don't feel guilt if you have to work. I had to work - a lot - when my older girls were young. I may have had less time then but I was 20 years younger and had more patience. They turned out to be good people and I am proud of all of them. Still, I am feel very lucky to have the time to spend with Julia.

Speaking of time, and judo, when I did a special issue of Growing Judo a few months ago on the topic of Coaching Your Own Kid, I was surprised that every single person mentioned the time they spent with their child as being one of the great benefits. It's true. I think of all of the time I spent with Ronda, and now Julia, driving to practice, driving to tournaments, hanging out in hotel rooms watching movies. When Maria was in high school and in her "I know everything" phase, about the only time we spent together talking was the 45 minute drive to UCLA and back for her pole vault practice. Someone commented that they didn't know I cared about pole vaulting that much. I told them,

"I don't give a rat's ass about pole vaulting, but I care about Maria that much."

I figure I better spend all the time I can with them before they move to New York, San Francisco and Boston, get jobs, get married, have babies and the only contact we have is by reading each other's blogs.

Gripping - far more than half the time, I estimate over 80%, the person with the inside grip wins. That is, if you have my lapel and sleeve in a right grip, for example, and my right hand is on the outside of your shoulder, you have a whole lot more opportunities to throw me than I do to throw you. You can stop me from coming in for uchimata, seoi nage and just about any other forward throw by blocking my right shoulder. You, on the other hand, can do all of those throws. If we both have a sleeve and lapel grip, we are even.

Get your grip! What exactly does that MEAN? If you are like most players, getting an advantage in gripping means getting an inside grip while not letting the other person have the same grip.

The lapel and sleeve are not the only way to get an inside grip. I am very short for my division, so that worked best for me. Ronda is about average size for 70kg. She sometimes gets a higher grip and crunches down on the person with her forearm on the inside and their sleeve. This is also an inside grip. What makes it an inside grip is that her arm is inside both of the other person's arms.
Posted by Dr. AnnMaria at 10:02 PM

Email ThisBlogThis!Share to TwitterShare to FacebookShare to Pinterest
Labels: children

Good luck on your new venture. While I only know you 'virtually' I'm sure that your passion and energy will shine down upon this venture and turn it into your next success!

Ciao AnnMaria,I think your love story start has been very sweet and romantic.Wich age did you start and than stop competitions?Why did you stop?Have you never meet italians girls in your Judo competition career?All the best Ric

Hi ,
a great post, I have twins and work for longer hours than I want to. i have been considering a change of career to allow me to spend "gobs of quantity time" with my ratbags.

your post ias a push towards that decision, so thanks.

If you had a student that was a muslim would you let her play judo while wearing a hijab? We beat this subject up a lot on other forums but it turned into a islam vs christianity fight. Since you said you lived in Pakistan. You might me more familiar with a situation like this.

I used to fight an Italian woman named Soracci. She was their number one player at the time. I didn't know her, though, just fought her on the mat.
I started competing when I was 12 and stopped at 26. I had a of knee operations, I had already won the world championships, had a two-year-old daughter and was getting married again. After I got married, I went and did all of the things I put off for judo - I had more children, I got a Ph.D., so it was just time to move on with life. By the time the 1988 Olympics came around, Ronda was one, Jenn was two and Maria was five years old. There were just other priorities in my life.

As far as would I let anyone compete with a hijab. Sure, why not? The only objection I can see is if it interfered with chokes, and in that case it would give her an unfair advantage and some other accommodation would have to be found.