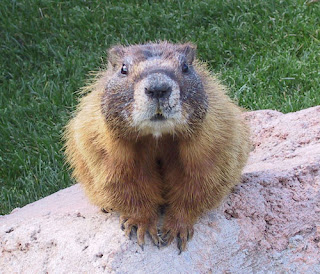 I was irritated today, which made this just like nearly every other day. In particular, I was irritated because I found out that some arrogant jerk in judo had done something which I thought was out of line. Again, a pretty typical day.

As most of my days do, it ended on a good note, and here is my important advice and the relation to marmots, about which you are no doubt wondering by now.

When you find yourself getting too concerned about what is going on in the judo community, people boycotting tournaments, idiots telling you that your athletes aren't good enough to come to their camp and train with them, old fat guys promoting one another to forty-seventh degree black belt, which allows them to get on the mat in a velvet judo gi holding champagne flutes ... try one of my three sure-fire cures.

1. Get some exercise - actually go to judo and choke someone, which amazingly, is legal, or go run or ride a bike. Since it was pouring rain in Santa Monica, the last two choices were out, and the rain meant by the time I got anywhere in this traffic judo practice would be over. This sent me to my second option.

2. Surf the Internet. This is a great way to bring it into perspective. There are billions of pages that have nothing to do with judo. One of my favorites is slashdot, which bills itself as "News for nerds. Stuff that matters."

It is interesting. I cannot vouch for their claim that all of it matters. For example, they had a bit today on the history of domain names like eat.com (owned by the same food company that makes Ragu and a bunch of other stuff) and milk.com which is apparently owned by a guy who just happens to like milk and who registered it 14 years ago back when you tried to think of a name for your site and went, "Milk! Hey, I like milk. I bet no one has registered milk.com " - and guess, what, no one had. Underneath the title, it says, "We love marmots". It also says, at the bottom, under disclaimer, that if you think anything here might offend you, go away right now. Gee, I need a tattoo like that on my forehead! I followed a number of links on this site and I can safely say I learned nothing of use, but I laughed a lot. I'll bet the milk.com guy doesn't know anything about judo.

3. Go to your public library. I guess Borders or Barnes and Noble would do but I love the library. It is such an amazing concept that I can walk into a place and walk out with an armload of books, for free. The Los Angeles Main Library has this in common with museums - it is a great place for restoring your faith in humanity. You go into these places and they have great sculptures, reading rooms, beautiful buildings, thousands of books. We used some of our tax dollars for this instead of blowing up foreign countries. Rich people decided to give their money so that complete strangers could have access to great art and literature instead of spending it on another yacht for themselves or cheap women and expensive whiskey or expensive women and cheap whiskey. There are very few books in the library on judo. I probably have more in my house. There are lots of books on other cool stuff, though. One I checked out is called, It's not news, it's fark. It is hilarious and I cannot put some of the really funny lines here because I know some underage people read this blog. There is also a website www.fark.com , with such valuable news items as:

So, you know that feces-and-blood-covered brief you just urinated on? Forgot about sending it in to the Texas court, buddy!

My husband said that it reminded him of me. I asked just how he figured a connection there, not having smeared blood, feces, urine or radioactive nuclear wastes on any court documents lately,

I am sorry to relate that yes, I actually DID have to say that. I am sure Ogden Nash could have written some really good poems about our household.

My point, which by now you have given up hope that I might actually have one, is this... Don't let your blood pressure rise over anything that happens in judo. It is just one of a billion things that exist in the world, and if it bothers you then just turn you attention temporarily to other things. Marmots, for example.

Three-person uchikomi - have one partner in front and the other holding that person. Fit in as fast and hard as you can trying to throw both of them. For forward throws, it is probably best if the person in back has hold of the partner's belt and back of the collar. For backward throws, they may want to be a few inches behind with arms lightly around the partner's waste and just hold the person up when "thrown".

Crash pad drills - draft two to five people and ask them nicely if they would mind taking falls on the crash pad. Throw for two minutes and see how many you can do. Offer to take your turn in line, of course. Often your partners will want to do less than two minutes, or not worry about speed and just do it at their own pace. Be polite and grateful. They don't need to let you smash them 30 times in two minutes, so if they do, and they can only get off five throws in two minutes, how nice of them to be willing to take falls for you.

Get an inner tube, put it around a post at home or a stairway railing and fit in on o soto gari or uchi mata dozens of times each day. We had one of those in our hallway for years. No idea where it finally disappeared to. This doesn't substitute for practice, but every little bit helps.

Newaza uchikomis - whenever you get a willing person, go through every mat technique you know. Then do it again. If you can go throw every mat technique you know five or six times that is a pretty worthwhile exercise. Of course, if you only have three or four techniques, you'll be done pretty quickly, but then, that tells you something else you need to work on, doesn't it?
Posted by Dr. AnnMaria at 10:14 PM

hahahaha! mom i LOVE you new link saying "my new company, they pay me MORE"

Ciao AnnMaria tonight someone made me crazy at the Dojo,someone is tryng to destroy whatI'm building with blood and tears(I think you understand that kind of person very well)I think I was very close to kill him,but suddenly I was thinking about your"we love marmots"so now I'm drinking my delicious glass of Italian red Chianti instead of a cold dark jail,thank you very much for this.How do you manage the kiu
about the beginner kids?I mean do you have test,exam or what else?
What kind of tatami do you like to teach?Grazie un saluto Ric

You do remember very well AnnMaria
the italian girl was Domenica Soraci,from Messina,Sicily.
Now she is 39,not doing judo or teaching it anymore.She has been for about ten years in the italian women team,winning medals at world university and european championships.Ciao Ric

Ric -
Chianti is better than jail. Good choice. I use an exam to promote kids. They get the test ahead of time, we practice it a little each week. I will say, "We're going to do an o uchi to ko uchi combination. This is on your orange belt test."

They need to learn anyway and when they take the test, which we do very officially in front of board of examiners- usually me, another black belt and a "parent representative" they feel as if they have accomplished something.

Jennifer -
A more Catholic person would feel GUILT about having broken a sword over her sister's buttocks.