and the time still flies by

I have to admit that I wasn't really sure how this retirement thing was going to work out. Maybe everyone else was right, and by the end of my first week of retirement I would be getting bored and not know what to do with myself. Nothing could be further from the truth. At the end of each day I am still wishing I had another ten hours. The big difference, though, is my stress level. In the past, there were reports or analyses or tests that needed to get done before tomorrow or we would miss a grant deadline, not get paid by the client or student grades would be late. Now, it is just that there are so many things I am interested in doing or learning. You might think this would be the obvious outcome. After all, as my husband said, I had 34 years of working to have built up a to-do list of things I meant to do "later" and it is going to take me a while to go through all of them.

Everything seems obvious after it happens.

In fact, a few years ago, I was at dinner with some long-time friends from judo and we were joined by the mother of an athlete wh had just started competing nationally. Not knowing any of us, she said to me conversationally,

"And what do you do for fun besides judo and work?"

There was an awkward pause, as I could not think of an answer. Someone made a joke out of it and the conversation moved on to other things. A few moments later, a friend to my right whispered worriedly,

"What DO you do, besides work and judo?"

The answer, for years, was "Not much."

What have I learned this week? Mostly that there is a whole universe out there I barely know. Every day this week I read the papers about the news in Iraq, the writers' strike, the discussions about charter schools and the Los Angeles Unified School District, students killed at a college in Illinois, at a high school in Oxnard, the election, the Los Angeles Police Department and preferred parking on the streets near Santa Monica Beach. All of these are huge issues to lots of people that I never would have even known existed before. Stepping back out of my life and taking a look at the larger world is important, I think, to gain perspective. While winning a tournament may mean a lot to an athlete, getting awarded a contract may be a huge deal - it really is just a tiny part of a huge world. 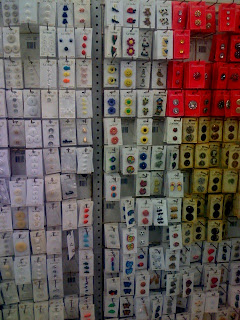 Speaking of things I never knew existed, I have not once, but twice this week been at a sewing/ arts and crafts store. Who knew there were so many kinds of buttons? No, I have not all of a sudden had an aspiration to become the next Martha Stewart. My niece, Samantha, is taking a sewing class, so we went on a scavenger hunt to find the 197 items on her supplies list. Standing in the aisle wondering aloud where we would find bias tape, a helpful woman pointed and said, "It is over there next to the zippers."

That would have been helpful if I had any idea what the hell bias tape looks like. You'd think by the name that it would be some kind of measuring device to see how prejudiced a person is, which is something I could have used on a number of occasions in my life, measuring potential dates, for example.

We did locate the bias tape, finally, due to the fact that zippers were one of the few things in that store I could identify by name, I CAN read, and the bias tape was labeled. To my great disappointment, it turns out that it is used for seams or something. As are, twill tape, hem tape and hem lace. None of these tapes are sticky, by the way, which I thought was part of the definition of tape,but this also turns out to be one of those false assumptions I had about the world.

What really struck me, though, was here is a huge store full of people who are all very interested in quilting, scrap-booking, sewing, cake making, soap making, furniture-making, knitting, crocheting and a hundred other activities that I am no more likely to do in this lifetime than to butcher a cow so that I can make a meatloaf. It took a great deal of self-control not to accost random people in the store and say,

"Seriously, this is what you do with your free time? You do paint-by-number stained glass? And you LIKE this?"

Yet, I have to admit what I am going to do for fun tomorrow is go down to the West Coast Judo Training Center and try to choke fourteen-year-old kids, so who am I to talk?

So far, I am not having any trouble at all filling my time in retirement. Maybe I'll have a different opinion after a few weeks. One thing is for sure, before I take up scrap-booking I am going to go back to work!

Watch judo videos/ DVDs. I used to make fun of people who did this, but I was wrong. Well, I am never COMPLETELY wrong. If you stay home and watch videos instead of practice that is just stupid, not to mention lazy. Watch videos when you come home from practice and are too tired to move, or watch them on those days you don't have practice, during holidays when your club is closed.

I should have done more of this when I was competing.

Most of the training tapes on the market are NOT going to rival Lord of the Rings in plot line or production quality. That's not the point. My statistics professors didn't look like George Clooney, they didn't tell good jokes and there weren't a whole lot of action sequences. What they did have was knowledge and I learned from them. I know that there are tapes out there that sell for hundreds of dollars. I have not bought any of those so I cannot comment. I did have two DVDs from Mike Swain and five videos. They were all pretty good. I sold them all, though. He sent me a box and told me to keep half the money from everything we sold for USJA Development. So, he gets extra kudos from me for having a good heart, too.

In my opinion, neither the Grip Like a World Champion nor the Get a Grip video are for beginners but I think every coach should have these in their library.

A lot of my friends really like Steve Bell's DVD Extreme Judo. When I saw it, I thought it was only okay, but so many people I respect have complimented it, I think I will pull it off the shelf and have another look, now that I have time!

Finally, you should definitely have 101 ippons and films of the world and Olympic championships pretty much from the time you start judo. At first, you will watch them and say, "Wow! Look at that!" And just get some idea of how techniques should look.As you gain more experience, you will recognize the set-ups and be able to analyze each match more. If you watch the same tape a year or two later, you may surprise yourself with how much you have learned.
Posted by Dr. AnnMaria at 11:11 PM

I just wanted to let you know thatI will be coming to your clinic after the Ocean state invitational.

I look forward to meeting and learning from you!

Cool! I look forward to meeting you, too.

Ciao Annmaria,I just saw Ronda video final in Budapest,ouchi was a clear wazari.I tried my first margarita in my life,well at the age of 48 I can say it will be not the last.
How long will you stay in Beijing?Wich date you will be back at home?Me and my wife are planning for the next holiday(august),maybe I'll have the chance to meet you in person.Is your judo center open in august?Un saluto grazie Ric