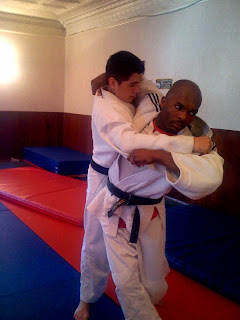 I was very glad I went, for a whole host of reasons. The West Coast Judo Training Center has been going not quite six months. That is enough to make a difference but not enough to bring everyone up to the point where they are all winning. About six or seven years ago, I remember a new club called Ki-itsu-sai started up in Florida. The first year, they brought a bunch of kids to the Junior U.S. Open and most of them did not win, but they fought hard and they all worked together. The second year, a lot of them won and by the fourth or fifth year, they were a dominant club in the U.S. This seemed like that start for West Coast. I saw a lot of people there, like Tony Comfort and Eric Sanchez, in the photo above, who are regulars at the training center, wearing their west coast jackets. Both of those two, as well as almost everyone else, had their home coach there, in their cases that would be Steve Seck and Frankie Sanchez. What makes the training center so special to me is that it is supported by people who really, truly care about the athletes they coach. They are more concerned that those players get enough time on the mat, enough different people to train with, than that they as the coach get 100% of the credit if the person wins.

Next lesson learned - be objective. I often hear coaches saying, "You didn't win but you fought well." On what do you base that? In Eric Sanchez's case, he beat some good people, including Jose Benscome, who had never beaten before, and although he lost in the final to Andrew Hung, the score was much closer than it had been the last time they fought - Eric lost by a penalty.

In other players' case (not from the training center), they did not win and they lost in the same ways that I had seen them lose many times before. So, I can objectively state that Eric is getting better and those other people are not.

Speaking of being objective, I have to be honest enough to admit I was tempted to put off going until next year. I am sure the people we have at the training center will be seriously kicking ass a year from now. It is always more fun to see everyone win and be part of that. However, this is the hardest lesson for me as a coach - you have to learn to accept losing - temporarily. Ronda lost a couple of matches in Paris today. Tony Comfort lost one match today. Anthony Igne, who won all of his matches in the 11-12-year-old division, still came in second because of the point method they use at this tournament.

I did not coach many people at the tournament because the coaches from their home dojos were there. What I did manage to do was watch everyone and make notes so that at practice for the next few weeks we can work on what they need to do differently to win next time. If you don't come back from a tournament with a more specific plan for your next few months of practices than "We need to work harder" then you probably weren't paying attention. Don't get me wrong, there are plenty of people at every tournament whose main problem is that they don't work hard enough, skip practice and slack off when they do come. There are also people who are working out hard but at the wrong things. They are working on perfecting their throws when they keep getting beat on the mat so they need some defense, or they can't get their throws off to begin with because they cannot get a grip.

One positive change I saw at this tournament was that gripping has improved, in general. At one time, if you had some gripping strategies, you could beat most people because "gripping sequence" was a foreign concept to most U.S. players. That has changed for the better. The overall level of conditioning has improved as well, although not to where it should be for elite athletes and some of you people - well, all I can say is, you don't even need a gym membership - go out, run a mile each day and some sprints, do 50 push-ups and 50 sit-ups and even that would be an improvement.

Biggest negative - it would be a tie between not attacking enough and poor matwork. Too many people are waiting for the perfect opportunity to attack and end up not attacking at all. Remember what I said about variety in an earlier post? If you only have one grip from which you attack and you cannot get it, you are screwed. Few people have a large enough repertoire - which goes back to the frustrating phenomenon I always see of people not doing judo any differently at 22 than they did as a 15-year-old purple belt. What techniques do you do now that you did not do five years ago?

90% of the matwork I saw was defense. Few people attacked from the bottom. I did not see a single matwork counter or combination all day. Few people tried something as simple as a half-nelson, even those people who are high school or college wrestlers who you think would know what a half-nelson is. It was evident that most judo players do not do enough matwork for it to feel comfortable, much less automatic.

And that is what I learned about judo in San Jose today.
Posted by Dr. AnnMaria at 10:37 PM

Again an insightful blog entry. Sounds like you could have been at any judo tournament, points are straight to the problem. Good training goal identifier you are coach. Winners learn by losing. Hey how about posting a pic of the "West Coast TC" jacket you boosted about.

I really thought that the folks putting on the tournament did a great job!! We as coaches really need to do a better a job at getting our kids to the next level and then one more above that. The highlight of this year for me will be in Las Vegas in June .I hope for you it will be seeing your daughter getting the gold China. The best to you.