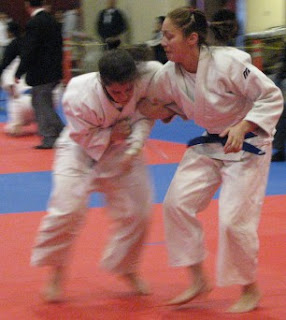 Wayne Gretzky supposedly explained his success in hockey by saying,

The same is true in judo.
In the photo above, from the USJA Winter Nationals (courtesy of Jerry Hays), Sarah Black won the match and Stephanie Moyerman lost. Question: Which one of them should change?

Answer: Both of them.

After the last two tournaments in Europe, seeing how the matches went, I emailed Ronda what I thought she ought to be doing differently. Both times, when I talked to her she commented,

"Yeah, Jim and Israel told me the same thing."

It isn't too surprising that people who are knowledgeable about judo would look at the same matches and come to the same conclusions. What makes me more comfortable when one of those two is coaching Ronda at a tournament is that I know, most of the time, they see the same things I see. What is surprising is that most people don't see the glaringly obvious necessity of "skating to where the puck is going to be".

Over and over, I hear players (and their coaches) comment that they don't need to change because they are winning all of the tournaments in southern California or Iowa or the junior nationals or whatever it happens to be. Two years later, they are not winning so much and they are trying to do more uchikomis, get stronger, so they can do the same techniques harder and faster. The result is that they win even less.

When you are winning, you should be looking at what other people would be doing to try to beat you. Then you prepare for that. When you are losing, you should be trying to figure out what the other person did and try to counter it or stop it. Sound obvious? See the picture below (another one from the USJA Winter Nationals, thanks to Jerry Hays). I don't know these two gentlemen, and maybe they are the exception to the rule. However, if he is like most people, the one who loses in matwork here will go back to the dojo and work on his throws, reasoning, "If I could have thrown him, he wouldn't have got me on the mat," rather than trying to work on his defense in matwork, or better yet, his offense. If you assumed that most people who lose go back and work on defending against whatever move their opponent did, you would be logical - and wrong.

And now for something completely different ...not letting it take over your life

Whether judo, business or whatever your personal interest is, it is easy to let it take over your life. This is especially true if you are pretty good at it. If I could clone myself, I could be at two or three judo activities almost every day of my life. A lesson I have finally learned is to make a conscious decision how much time I am willing to donate to an activity, whether it be judo or business. I refuse to spend more than 20 hours a week on judo, on average. I am at the West Coast Judo Training Center from 10-4 every Saturday and from 10-1 some Sundays. It is about a 90-minute round-trip to get there. I try to watch the players at most tournaments, and that can be another six hours or more. I edit Growing Judo magazine. I answer email from coaches, parents and players around the country, have conference calls with Development Committee members and with individuals planning events.

At one time, I felt guilty if people told me that I should be attending their practice , camp or clinic. They would be angry or disappointed with me that I did not show up. Now, I don't feel bad at all. I realize that I donate the equivalent of 50% of a full-time job to judo. If I choose to do this with the people I enjoy, during the hours that are convenient for me and without involving driving across Los Angeles county in rush hour traffic for three hours - those are perfectly good choices.

The same is true of work. If the success of a company depends on me working 80 hours a week for years on end, then that means someone is assuming I should just donate the equivalent of my salary to other people. Well, I already do that, actually. It's called income taxes. Being a team player is one thing. Being a sucker is something else all together. Decide how any hours you can work and still have the type of life you choose to have.
Many years ago, my late husband was complaining about some people who worked for him who he did not think put out enough extra effort. Our little daughter, Jennifer, piped up,

"What are you going to do, Dad? Sell they kids?"

"No sweetheart, I am the boss but I am not allowed to sell people's kids."

She considered this for a moment, and said, with all the practicality of a three-year-old,

"I bet if you could sell they kids if they didn't work, they would work a lot harder."

If you are called upon to work 60 hours every week then, again, you are donating the equivalent of a half-time salary to your employer. Is that what you want to do? If not, don't do it. After all, I have it on good authority that they are not allowed to sell your kids.
Posted by Dr. AnnMaria at 12:07 AM

How did you win your ego in being slammed first times in judo?
My ego tends to make me angry when I'm slammed, particularly from smaller people.

Well, first of all, the only people who are smaller than me tend to be twelve or younger, so I don't get slammed by them too much.

I think you want to make a distinction between practice and tournaments. Since I was at practice to get better, getting thrown really did not bother me that much. It was my chance to work on counters and defense. Of course, almost everyone was bigger than me, so that may have played a part in why I did not think getting thrown was a big deal. Also, I was always pretty confident in my matwork, so I reasoned that even if someone threw me for 47 yukos, when we hit the mat, I would win by ippon.

It wasvery well organized and most informative. [url=http://www.vanessasac.com]Sac vanessa bruno[/url] So it's not for us to say what's too pricey to write about. I think this is all due to less job opportunities in Europe, the citizens have no other options then to borrow money etc. Flagstaff on the other hand is warm and hot in the summer and cold in the winter.
Buy Zune for its radio, its a change from your playlist. [url=http://www.icanadagooseca.com]canada goose[/url] The accusers were Jordan Chandler and his father, Evan Chandler. http://officialcanadagoosesoutlet.ca
[url=http://flyballbags.com]canada goose on sale[/url] But do Thou, O Christ God, Who did justify the publican, and did have mercy on the woman of Canaan, and did open the doors of Paradise to the thief, open unto me the abyss of Thy love for mankind, and receive me as I come and touch Thee, as Thou did receive the sinful woman and the woman with an issue of blood. [url=http://www.onlinebeatsbydreoutlet.com]ioffer beats pro review[/url]