Advice to my little pumpkin 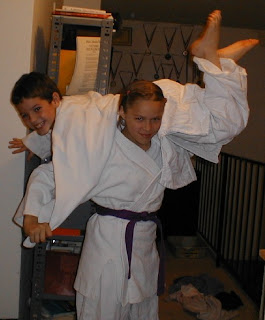 It's been a long road to the top of the world, a lot of years since you were doing kata guruma in the hallway with your cousin, Mitchell. Now, there you are at the Olympics again.

I know you're not always the fastest to read your email, since there is usually something in it you don't want to do, like send in your USADA forms or mail bills. So, I thought I would post some of my maternal advice on my blog, since I know you read that. (Aaah! Cannot escape motherly comments, even on the Internet! Below is a stick figure of you running away with your arms up in the air screaming.)

My little Pumpkin ...
RUN! Jimmy said run two miles every day and he said that Bobby Lee is there as your training partner and he’d better get out there and run two miles with you and take all the falls for you that you need and if Bobby comes back fat Jim will know that he didn’t do it, and he’ll make him wish that he had.

Okay, now that is out of the way. No one is neutral about you being at the Olympics. Some people are nervous, some are excited and there are no doubt some jerks out there who wish you’ll get thrown on your head in your first match and break your neck.

Time for some motherly advice….

Four things determine who wins any match, technical ability, physical ability, luck and how badly you want it. Out of those, I think luck is by far the least important and the ‘want-to’ is the most. Technical ability is usually pretty much of a constant (yes, I do teach statistics). At the six-year-old level, most kids can do one throw half-ass without falling over, in the ten-year-old division, they can keep their balance but seldom think of a combination and at your level everyone is aware of gripping strategies, leg picks, sankaku and matwork combinations. You’re not going to go into uchimata and catch Ueno with it just because she will be stunned thinking

“Gee, what is that throw where the leg goes between your legs? I have never seen that before. I must study that when I go back to Japan.”

Notice I didn't say you couldn't throw her, I am just saying the reason you can throw her isn't because you know techniques she doesn't know.

You will win because you have trained to get technically better for the last ten years. You have never accepted that you are good enough to stop improving, you have gone from Montreal to Boston to Japan to Europe working on getting technically better and better. You haven’t just taken what your instructors said and tried to be a clone of Jimmy, Jr. or AnnMaria or Israel. You have taken from people all around the world, kept what suited you and discarded what didn’t. You have created a technical style and repertoire that is uniquely your own, fit to you and therefore greater than the sum of all of the parts. Technically, you have everything you need to win. You have it because you wanted to win badly enough to get it. The "want-to" comes on long before the day you actually fight.

The second thing you need is physical ability. You were just blessed by God that you have the physical ability you need for judo. Judo requires strength and endurance. You have both. You were born with the perfect body type for judo, but you also poured hours and hours into weight-lifting. If either of them had trained like you, Maria or Jenn would just be a shorter version of you. Or, I guess, since they are older, you would just be a taller version of them. The difference is that you trained the way you did because you wanted to win the Olympics, where they wanted different things out of life.

Physically, there is no one in that division who is better prepared than you. I guarantee it. (Oh, did I mention that Jimmy said to remind you to go out and run two miles every day and that Bobby sure as hell better go with you if you need him to, even if it is at 2 a.m. )

Luck - yes, there is the luck of the draw, getting the person in the second round whose style just makes it easier (or harder) for you to beat. Having that person beat someone who is a weird style for you to fight first round. There is the bad luck of getting injured or catching the flu the day before the tournament. There is just making a mistake, crossing your feet and getting slammed for ippon when you are off balance. To a great extent, though, I believe that people make their own luck. You and I both know that there are people in Beijing right now that there is no conceivable draw or scenario that ends with them getting a medal. The only possibilities fall into the Alien-spaceship-drops-into-Olympic-compound-competitors-eaten-by-aliens category. You can fight sick or injured. That's why we made you fight in the Panamerican championships with a torn cartilage and in the European camps after you had mono. You came out of it with two medals. You can fight through sickness and injury if you want to bad enough. Even if you make a mistake, you can come back from it and still win, like that time at the Panamerican team competition where the Columbian caught you for waza ari and pinned you and you got out of it and threw her for ippon. You make your luck and most of the things that are completely luck happened long ago - you were born with physical and mental ability instead of some disability that would keep you from competing. You had good coaches all of the way along. You had kind people who donated money (and a great family that put in overtime hours!) to get you the funding you needed to travel. The luck already happened, Pumpkin, and it went your way.

All that is left is the want-to. That is the most important, as I said, and you have that, too, in spades. I'll write more about that tomorrow. It is almost midnight here, we had practice today, and I am tired. Harout got out of one of my pins for the first time. His matwork is getting better. I think there are not very many areas of life where a high school kid can hit somebody's grandmother in the face and everyone says, "Hey, way to go! Good job!"

They are all getting better. It will be great to have you home, not the least because every kid at the training center is tougher,better and has more talent in them than they realize. I am looking forward to having you home to help prove that to them.

Also, read your email because I put some things in there that perhaps aren't to be read by everyone who owns a computer, like about iguanas.

P.S. If you run out of stuff to read, the July issue of Growing Judo can be downloaded here. Since you complained in your blog one time that you never get to be on the cover of any judo magazine, I put a picture of you on the front cover!
Posted by Dr. AnnMaria at 11:06 PM