Sometimes I Listen to Myself Talk 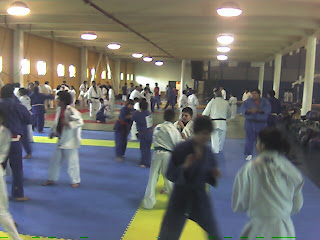 A few nights ago, I was out with some friends and in passing, a young man was mentioned who had great potential. I said it was too bad that his talent was most likely going to go to waste, just like a thousand others I had seen over the years. Two of the people at dinner asked,

"What do you think he needs to do that he's not doing?"

(It didn't dawn on me until later that he was from their club. This is the part where it becomes obvious that tact was not a required course in any graduate school that I attended.)
I answered,

"He needs to quit believing his own press. He needs to realize what a huge gap there is between being third in the U.S. national championships and winning the Olympics."

Later, thinking about what I had said, I wondered why that was the first thing that came to mind, that he needed to think differently. Why didn't I mention some specific judo techniques or drills? It's very likely that is the sort of answer they were expecting, e.g., he needs to do more uchikomis, more throws, lift weights three times a week. In fact, thinking about it now, I can think of some definite suggestions for improvement, for example, that I have only seen him do two matwork moves consistently, and both of those occur from the same position, when the person is on all fours and he is on top of them.

So why is thinking differently the first thing that comes to mind that all of those people - and there really have been so many of them over the years - who had far more talent than was ever realized? Am I really turning into one of those useless old people who when you ask them for advice, instead of saying, "Get an inside grip and control the left shoulder by grabbing the lapel three inches higher," gives fuzzy, mountain-top-sitting guru platitudes like, "Always remember that no one has the right to beat you."

Yep. Probably. Most definitely. Except .... (gasp for stunning revelation here)... maybe those old fossils had a point, and I just figured out what it is.

Speaking of old fossils, Jim Pedro, Sr. has a saying he repeats all of the time,
"Sport emulates life."

I believe it is true in judo and in life in general that if you change your way of thinking, the rest of the changes follow from that.

It's like this ... when I realized at 19 that winning the U.S. Open just meant that I was a pretty good judo player and there were still people out there that I did not know how to beat, it never occurred to me to just do more of what I had been doing. I moved away, started going to training camps, went to stay with people like my friends Steve and Becky Scott in Kansas City and we would spend weekends thinking about judo, talking about judo, trying throws, trying matwork combinations, trying to figure out what would work for us and what wouldn't.

When I decided to win the world championships, not just "do my best", or "try not to embarrass us too badly and if you fight the Japanese, try to last at least three minutes" - I changed how I did judo all over again. I started going to Tenri every weekend, doing five practices on Friday, Saturday and Sunday, another four the rest of the week. My judo did not just change in quantity, but in quality.

To move from being a success on the national level to being a success on the world stage, I think you need two things. First, you need to see the distance you must cover to bridge that gap. Second, you need to take the steps to do it. The one follows from the other. The main failing I have seen in most of those people with great potential who never made it was they never could check their ego at the door of the dojo. Now, it can truthfully be said that I have a high opinion of myself. Yet, I always actively sought out people who could kick my a$$, not just on a two or three week trip to Japan, and not just going with some three-hundred-pound seven-foot guy, but people who were close to my size and just better than me, whether they were visiting or if they were at the dojo down the street.

Think about this - why will people spend thousands of dollars to fly to Korea or Japan to train for a month with people who can throw them, but not drive twenty miles on the day their club doesn't have practice to a club where someone can give them a good fight? Instead, they go to clubs where there is a "gentleman's agreement" not to fight too hard, not to "cheapshot" anybody by going straight into matwork from standing (not sure how that is a cheap shot since they allow it in tournaments), not to rough anybody up.

I knew I had to push myself to be best in the world, and if that meant that Steve Seck threw me 10 times during a five minute round of randori or that Neil rubbed my face into the mat trying to turn me over during matwork after I had just armbarred him, then so be it. My goal was to win, not to impress the people sitting on the benches in the dojo watching practice. I knew I could not afford the luxury of worrying about them, because I could see how long and steep the road was in front of me.

++++++++ Judo Tip of the Day +++++++++
My first senior national, U.S. Open and collegiate national gold medals were all at 48 kg. Top players in the lightweight divisions either have to have blistering speed or be able to slow down those people who do. If you are fast, but not best-in-the-world fast, you need to compensate by having an advantage in physical strength and conditioning. Greater strength allows you to crunch down and hold those little human pinball people in place so they can't whip off a seoi nage and dump you. Sometimes those players are overconfident on their speed and they don't have all of the endurance, or maybe it is just a genetic factor, kind of like Cheetahs, which are the fastest animal on earth - for short bursts of speed. If you can hold them to the fourth minute of the match or into overtime, they have nothing left. Make sure that you have a lot left. I ran track in college and I was definitely not a sprinter. Some days at practice we would do 20 100 yard dashes, I believe the rationale for this was the coach hated us. The sprinters would finish 10 yards ahead of me on the first 100. By the tenth one, I was even and by the 20th, they were ten yards behind me.

One good way to run down the clock on those Speedy Gonzales players is in matwork. This is good in general because speed does not generally provide as much of an advantage in matwork as standing, and it is also a good way to grind an opponent down. If they are on the bottom, make sure all of your weight is on them, even if they are on all fours or flat on their stomach.

If you are on the bottom, make sure you have them tied up. Think leeches. (If for some reason totally beyond me you would like to actually buy real leeches, like to suck your blood or something,you can purchase them here) .

You also need to learn to use gripping to lock down and block out those people who are faster so they can't pop in with a seoi nage or tai otoshi. This current MTV generation acts as if they invented gripping and grip-fighting. I must admit that they are more scientific about teaching and studying grips than most competitors I knew when I was younger, however, it is definitely not a new concept. One of the tactics I used, as did other people like me who had strength as more of an asset than speed, was to get a high grip on the collar and drop my forearm down on the person's chest, to make it easier to block when they came in.

If you really are strong enough, another option is just to move up a weight division, which is what I finally did, in fact, I moved up two divisions. The competitors weren't as fast, I was still stronger than almost everybody and it had the advantage of being able to eat a much greater quantity of Haagen Dazs chocolate chocolate chip and Baskin-Robbins peanut butter and chocolate ice cream. Hey, sport, like life, is all about balance.
Posted by Dr. AnnMaria at 10:05 PM