So Your Child Made the Olympic Team: Eight Tips That I Wish I Had Sooner

(Hey, it's my 50th birthday today and I will spend it in China, Japan and back home in Santa Monica. Because of the time difference I get a 36 hour birthday. I have a 4 hour layover in Japan and am typing this on kind of a funky Japanse keyboard. Good thing I remembered enough of the Japanese I learned in college to read where to log in, etc.

Thanks to all of those people who sent congratulations. Since I did not have Internet access for the last week except on my iPhonE for about a gazillion dollars a second, I have a lot of posts saved up on the Olympics, China (the Restaurant of Disgusting Foods) and general observations, like dishing dirt on Jim Pedro, Sr. who had all of the young Chinese girls in love with him - "He has so much hair! Don't you think he is hot?" "There are multiple ways in which that question can be interpreted, but I believe the correct answer to all of them is 'no'."

Okay now this weirdo Japanese keyboard had decided that everything should be in caps, so I am having to type this holding down the SHIFT key. I hope you all appreciate it!

TIP #1 : LEARN FROM PARENTS WHO HAVE BEEN THERE BEFORE
It struck me after it was all over how lucky I was that Jim Pedro, Sr. was along in Beijing because he had been to four previous Olympics as a parent and a coach. When he told me he had plans to go sightseeing every morning, I thought he was crazy. It's the Olympics, how can you even think about anything else?

TIP #2: KEEP BUSY
Every day, Jim had something planned that took us hours. In addition to the amusement value of hearing Arkady complain about the walking and repeatedly sounding like my ten-year-old daughter: 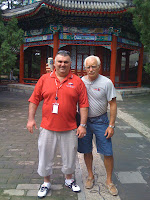 We were here before, we already saw this temple. What is it with you and the walking and walking around?

No we didn't you crazy Russian, that was another temple.

What's the difference? It looked just like this one.
...

we saw a lot of incredible stuff. We went to temples that were thousands of years old, took pictures of some beautiful architecture. In short, we took time to soak it all in, just being in China. The huge benefit, I realized later, was that I was too busy ogling all of the sights to worry nearly as much as I would have otherwise. I was actually having a good time and more relaxed. (More is a relative term here. As all of my daughters can tell you, I worry for a hobby. If I didn't have anything to worry about, I would worry about that.)

Since I was more relaxed myself, meeting up with Ronda later in the day was less stressful for both of us. Instead of going on about all of the things she should remember to do or not do in the competition, I told her about all of the cool stuff I saw that morning.

TIP #3* EXUDE CALM
Momentarily, I considered reminding Ronda not to take the tournament too lightly, because she did not seem as freaked out as I usually was before major events when I competed. Then I caught myself and remembered that this was the Olympics and no one with a pulse is taking it lightly. So, I didn't say anything about the tournament. Come on, you have known your child his or her life and probably 10 years or more as a competitive athlete. Anything crucially important you should have said 50 times by now instead of waiting until the day before competition in the Olympics. Instead we talked about the murals she wanted to paint in the house and the movies Julia wants Ronda to take her to see. (Here is part of the seascape she painted on the wall in Julia's room after the last big tournament. The little monkey is not part of the original painting. Julia added that later.) 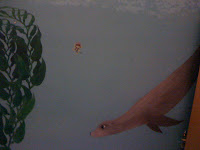 TIP #4: DON'T BE A BURDEN
Dr. James Lally, who is involved with USA Shooting as well as the USJA, has been around a lot of Olympic athletes and their families. Both his stories and my own experiences have shown me the good and bad side of families.

Things not to say include:

"We made the Olympic team"

"I flew half-way across the world to watch you compete."

Unless you and your child are competing as a team in synchronized diving, YOU did not make the Olympic team. Yes, most Olympic athletes have unbelievable, incredible support from their families. Still, out of the two of us, Ronda and me, one woke up on Thursday morning with every muscle in her body sore and looking like she had been in the middle of a prison yard brawl.
Hint; It wasn't me.

Yes, you flew half way around the world, but your child has been focused on this day for every waking moment of the past two years or more, not to mention the years of training before that. I think it helps that I was once an international competitor, so I understand the need to get focused before a match.

I have seen parents sulk because their child did not want to be with them and instead needed to sit in the sauna to lose weight, run, or just sit and think about the game plan for the next day.

TIP #5: ACCEPT LIFE
It is what it is. Ronda is a b-tch and a half the day before she fights, always has been. She recognizes it and is sorry afterward, sometimes even at the time. Things that I would have thumped her on the head for any other day, I let pass. For one thing, I was twice as bad when I was a competitor, so it would be too hypocritical to tell at her for being rude.
Bruno Bettelheim said,

"Whatever a child does, no matter how crazy it may seem to us, it was the best thing he could think of to do at the time."

Your child is under an enormous amount of stress and handling it in the best way he or she can think of right now. Yes, I am sure you did not raise your child to be a rude, whining, self-centered little twit. You have every other day of your child's life to teach him or her to straighten up and fly right, but not today. (If Ronda thinks that Olympic medal is getting her out of changing the cat litter even once, she is so mistaken. Okay, well, maybe once, but that's it.)

TIP #7: PARENTS GET NERVOUS, TOO
I noticed that Jim Pedro was really nice to be around this trip. He was helpful, pleasant and considerate. During the day when Ronda was fighting, he turned to me and said,

It dawned on me that a big part of the reason he had been harder to get along with on those other trips was that he was every bit as nervous then as I was today.
No matter how much your children win or how old they get, you still love them and worry about them and hold your breath each match every bit as much.

Remember if you are with other parents who seem a bit like jerks that they are nervous, too. You probably don't realize it because you are too stressed yourself but it is doubtful you're at your social best this moment either.

The nice folks from NBC came up and asked if I minded if they taped me during Ronda's matches. I told them that I didn't mind as long as they didn't mind the fact that I was going to scream my head off like a complete idiot.

TIP #8: ENJOY IT
So, congratulations, your child is at the Olympics. It is a great experience to watch. Try to take it all in, including watching your child compete as one of the top athletes in the world. There was one point in the bronze medal match where Ronda was thrown up several feet up and I was sure she was going to lose the match. Four inches from the mat, she twisted in the air, landed on her feet and attacked. I completely forgot everything else for a second and the thought that went to my mind, with pride, was

"My baby is an amazing athlete."

When I mentioned it to Ronda the next day she laughed and said,

"Did you like that? I must have practiced that friggin' matrix move at Jimmy's a thousand times. I better pull it off."

So, yeah, enjoy it. It's a great experience once it is all over and you can exhale again.

I have a lot more to write about the tournament, tips for coaches and China in general (dudes, what's with the plumbing?). More later. It is my birthday, I have several thousand yen in my pocket and there is a great restaurant next door, I am told, so I am going to drink sake, toast my life, judo and the Olympics.
Posted by Dr. AnnMaria at 9:51 PM

Happy Birthday...so whats Ronda getting you for your birthday :)

Happy birthday to you and congratulations for Ronda.
Thanks a lot for sharing emotions.
In Italy bookmakers pay 1/6 Ronda winning so I decided to put 20euro
because I know how well she prepared the event and how much she is a strong judoka.
I hope this medal will give to her the power to continue so a nice judo career.Ciao Ric

I love reading your blog because, your entries are poignant, insightful, and so gosh-darn funny in the process.

Of course, there is no better birthday present than a giant helping of 'Nachas' - an old Yiddish word which loosely translates into 'Parental Pride'

Happy Birthday and Congratulations. I bet this is one birthday you will never forget.

Now that your job in China is done, hurry up and get back, we need you and Ronda at The West Coast Training Center.

So for your 50th birthday you get a new live-in tenant(that happens to be a daughter) with a violent history of throwing people down and armbarring them. Lol jk

Happy Birthday and gratz to you both again.

Incidentally, you looked great on TV.