Volunteering, Judo and Other Things in Life 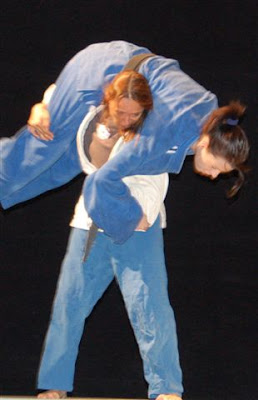 After coming back from China, I coached at the West Coast Training Center the next day, slept 11 jet-lagged hours the day after that and still had a paper that needed to be finished by Monday for publication in the proceedings of a software conference where I will be presenting. I worked on it for 17 hours straight and submitted it on-line at 2 a.m. Tuesday, Gary Goltz, the king of all salesmen, talked me into coming out to a showing of the Tokyo Olympiad, sponsored by Nike, where we did a 45-minute judo demonstration that included a match between me and Ashton. 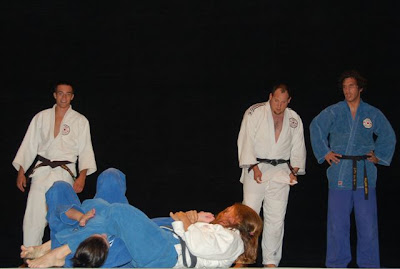 (Note to self: Fifty-year-old grandmothers should not be lifting young women half again their size up on their shoulders because even if they throw and armbar them, said young women pop out of bed all springtime fresh-looking and go jogging the next morning while the aforementioned grandmothers try to move while groaning, "What the hell was I thinking?" and "Ooh, my arthritis! Where's the aspirin?")

Since I had already been to two practices and a demonstration in the four days since returning from China, I decided to skip practice tonight and clean the house. Yes, I know that sounds as if I have lost my mind, but lately, I have had an epiphany of sorts. It started with a couple of comments that Ronda made in the middle of a really long post on her blog.

First, she mentioned Sayaka's remark that 100 yards away from the stadium where people were battling it out for a gold medal, people on the street didn't even know judo existed. Second, she pointed out that the day she competed was just Wednesday. It didn't stop being Wednesday because the 70 kg women fought in the Olympics that day.

Judo is great. I have been involved in it one way or another for 38 years of my life. I have fought in everything from the 12 and under white and yellow belt division to the world championships. I've coached at all levels from preschoolers through college and held positions from committee member in the local black belt association to president of the largest state governing body to vice-president of the United States Judo Association.

As far as all of the organizations, my involvement has a very simple motivation. Back in 2004 when Jimmy Pedro, Jr. was running for president of USA Judo, I told Jim Pedro, Sr.

"All I want is for judo in the U.S. not to suck. You and your son are part of that not sucking. That's why I am supporting you. It has nothing to do with liking you or not."

Actually, I like Ron Tripp, the current president of USA Judo. He's smart, he's funny and a nice guy to have a beer with. However, on all dimensions from ethics (come on, we had a child molester on the board of directors for years ) to the abysmal showing in the Olympics (as I said in my last post, if it hadn't been for Jim Pedro, Sr.'s athletes, we would have had exactly ZERO medals out of the 224 given out in the last four Olympics - 14 divisions times four medals times four years (for those of you who don't know, there are two bronze medals given out) our general performance as a sport can be summed up as "sucking".

Where do volunteers come in? First, if it wasn't for volunteers, we would have no judo at all. I try very hard - and unsuccessfully - to return every email and voicemail message that I get. Currently I have 326 messages in my in-box. I will probably set aside Sunday and get it down under 200. Often, I will get email from judo coaches, parents and athletes around the country saying,

"I can't believe you took the time to answer my question."

I try, because you ARE judo. I have been somewhat discouraged with some of the people in our judo organizations lately because, in my opinion, they are losing sight of the fact that judo will live or die based on that person who has a dojo on the corner, that parent who drives his son to practice, that coach who volunteers at the community center. Having a title, having a high rank, doesn't increase the number of judo players - offering a class at the YMCA does.

I went to the absolutely beautiful Doheny Library at USC today to get a couple of books. Doheny has NINE FLOORS of books and magazines and is one of, I think, 26 USC libraries. I am sure they have over a million books in their collection. I took two books I really wanted and decided to pick up the third one at the engineering library after I finished these. Like everyone else, I have the option of being a volunteer at judo activities, or reading any one of the million books in the library or cleaning my house.

Speaking to another very nice man yesterday, I said that if I could not trust people in his organization, I would not work with them ever again. He said,
"Oh, you don't mean that."
I said,
"Oh, but I do."

I don't think he understood it. Even my friend, Gary Goltz, seemed unclear. He said,
"AnnMaria, when you say you will never work with someone again, you sound like a loose cannon, like you are threatening people and no one likes that."

What Gary didn't quite get is that I was merely stating a fact. Like any other volunteer, I have a lot of options. I can give back to my community through volunteering at my church, my child's school, my local judo club, my state organization, Save the Whales, Save the Freckled Three-Legged Iguanas (okay, I just made that one up but you get my point).

At the showing of the Tokyo Olympiad, I ran into my old team manager and former Tenri homeboy, Dr. James Wooley. I reminded him of the time after he had retired from competition when I asked him if he was depressed he couldn't compete any more and he said something like,

"Oh God, no! I had a great run and I loved it. Two Olympic teams, Panamerican Games, everything else, but now I'm done, I have a practice, a wife, a son, I couldn't be happier."

At the time, at my great pinnacle of wisdom at 23 years old, I thought he was just putting a good face on it, that of course everyone who could not compete any longer was depressed because their life was essentially OVER.

Well, I retired from competition at 26, married, had children, got degrees, a career and was very surprised to find that my life was not in fact over but was just beginning.

I told Jim Wooley that I had not decided whether to run for the USJA Board in 2009 or not but that I had decided for sure that I was absolutely done after that. I asked his advice and he said,
"I think you are exactly right. You and Jim Pedro have done an enormous amount. Your share and more. Whenever you feel you want to hang it up and go fishing or sit in front of your computer or whatever you do, you have earned that right."

I know that I am not more important than, deserve more votes than or any way different from the rest of the volunteers in judo. I do what I do because I enjoy doing it, trust the people I work with and believe I am making a difference toward 'not sucking'. Whenever any part of that equation changes, I will quit volunteering with that group, forget all of their names, and instead probably read a book or clean my house or walk down to the ocean where the sun will be shining on another beautiful day in paradise.

And it will still be Wednesday.

So, that is why I always try to call and email everyone back and thank them for being involved in judo. Because, if you get disenchanted with us and go fishing, our organization will have one less valuable person and we will be the lesser for it, while, for you, it will still be Wednesday, regardless AND you'll have fresh fish!
Posted by Dr. AnnMaria at 12:17 AM