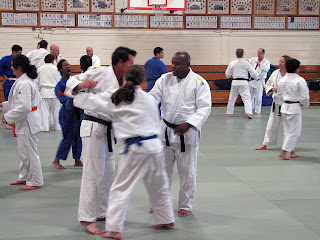 After the last blog, I had some more ideas on teaching younger athletes, but I promised to write about 13-16 year-olds today. Of course, the age range is approximate and depending on the individual's maturity level, could range a little older or younger.

Rule #1: During these years, you need to decide if you want to be a serious competitor or not. This is not an irrevocable decision. You can decide at 14 years old that you like judo but don't want to go to the Olympics because that just isn't what you want to do. That's perfectly okay. Winning the Nobel Prize for Chemistry is a wonderful thing, too. I never wanted to do it personally, but that doesn't make me a loser or make the Nobel Prize any less of a great thing to win. At 17, you can change your mind and train for the Olympics. Or, at 21, you can decide to scale back and concentrate on college for a while. This window isn't open forever - 46 is too late to go to the Olympics in judo.

There are two tough parts to this decision. First, it has to be your decision. Although you definitely should consult your parents and your coach, you need to decide for yourself. Deciding that you're not sure is okay, too. Second, the really hard part if you know they aren't going to like your decision, is sharing it with them. Every coach who has been around for a while has seen parents spending a huge amount of money sending their children all around the world, to expensive training camps in the U.S. "to fulfill their Olympic potential". Although the coach and everyone else knows the athlete really is not that driven to win, the parents are blissfully ignorant because their child doesn't want to let the parent down by saying,

"You know, I know what it takes to win the Olympics and I don't want it that badly."

Believe me, it is going to be even harder to say ten years from now when they have taken a second mortgage out on the house to fund your travel.

As a coach, it is really important for you to periodically discuss their goals with athletes. LISTEN. Don't argue. Most people do not choose to go the Olympic route and if that athlete wants to train for fun, to stay in shape or to some day be a teacher him/herself that is fine. If that is not fine at your club, and a few clubs are solely for competitors or solely for non-competitors, recommend a club where you think the student would be happy. Doctors, counselors, lawyers and other professionals make referrals all the time.

Your goal should fall in one of three broad categories:
1. I want to do judo, get a black belt, maybe help teach at this club or start a club somewhere else, but I am not really interested in competing any more.
2. I'd like to compete when I can, maybe go to the nationals, even try the Olympic trials if I can, but judo is not going to be my whole life. Getting into a good college, work, prom or playing the Wii are just more important to me. I wouldn't mind helping out at my club or some other club some day.
3. I want to win the Olympics if I have to walk through the gates of hell to do it. Maybe I will think about being a coach when I am done.

Let's assume you are one of the first two, because guess what, 99% of the people are, but about 10% of them don't admit it. Every one of those three groups ought to go to all of the GOOD camps and clinics they can. At 13-16 you still have a whole lot to learn and the more people you can learn from, the better. For you future instructors, you are looking for a broad range of knowledge. For you competitors, this gives you more time on the mat to practice your skills. GOOD camps, like the Judo Forum camp will offer options. Look at the picture below and the one at the beginning. Both were taken at the same camp. 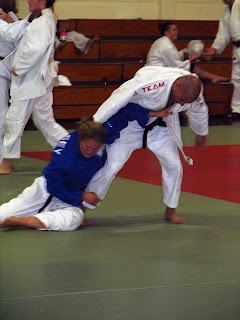 Ronda and Rick, two people who competed in the 2004 Olympics, are going after each other in randori. This was shortly before Ronda left for the 2008 Olympics and Rick is doing his best to push her to the limit. Above, Gary Butts and Mark Bruce, two coaches in their late thirties who have actual jobs they have to show up for on Monday, are instructing a young player who wants to learn better grips.

When you go to camps like this one, they will usually let you select which sessions you want to attend.

Coaches: Lose the O-sensei b.s. If a young athlete asks if he or she can attend the technical session instead of the randori one, unless there is some hugely pressing reason to say "no", as in, they were being a complete jerk, you should say, "yes". Students will learn far more in the session they were interested in attending.

I have seen 70-year-old men bore young athletes to tears going on about the history of judo and how to do sasae tsurikomi ashi from 400 directions when the athlete just wanted to FIGHT. I have also seen fifteen-year-olds forced to go one round of randori after another until pride was the only thing that kept them from breaking down in tears. Maybe it will make that person tougher. If they aren't interested in competing, that isn't going to help so much and the technical session would have been far better. For the young competitor, that exact same lesson two weeks after the U.S. Open might be a great opportunity to pick up a new skill. Two weeks before, it is just an annoyance. Too often, the training for our young brown and black belts is determined by someone else's ego - Of course they all have to learn from ME.

Personally, I like teaching small children. I think they are funny and you can have a good time with them. For a while, that was all I did because so many other people ONLY wanted to teach players once they had a brown belt or so. I think that was a mistake and the easy route on my part, because many of those players ended up quitting. If I had to do it again, I would stand up for those teen players more.

My daughter, Ronda, is really good about that. Sometimes we have visitors to the West Coast Training Center like Dan Takata, who is a really good referee, who came to talk about the rules and the players had a hundred questions. Other times, though, we will have people who might be very knowledgeable but our younger brown and black belts have driven an hour or more for practice and they expect an hour of randori, a half- hour of matwork randori. Ronda will pull me aside and say,

"Mom, you need to say something or I will."

I know this wasn't focused to much on techniques but here is the fact: You need to decide what your goal is first, because where you go determines what steps you are going to take to get there.

========== ACTUAL JUDO TIPS =================
For serious competitors, from 13- 16 you need to start training at least four times a week AND lifting weights AND running on top of the four times a week judo. In the U.S. we don't have enough hard randori partners to build up your strength and endurance to its max with judo alone.

NEVER skip judo for running or weight-lifting. If your other workouts make you too tired for judo, cut back on the intensity of those.

What age you start lifting is going to be decided by how soon you develop physically. Pretty much when you hit puberty it's okay to hit the weights.

Keep a record - it can be a journal or just notes on your calendar but it should include at the very least what you did that day , e.g., ran 6 miles, judo at NTC. Lifted weights - curls, bench, cleans - for reps, judo at Tenri. If you don't keep a record it is too easy to fool yourself on how hard you are working.

You instructor types should keep a record also. Keep notes of the stuff you learn at camps. Buy instructional videos and study them. Jimmy's Grip Like a World Champion is good (kind of boring but really good information). Mike Swain's tapes are good - basic judo, basic grappling, and if he still sells those videos on Counters & Combinations (that's the best one), hand techniques, etc. grab those. Hal Sharp's tapes are really good too, and the least boring with lots of highlights. I think we have the Shoulder Throws one from Fighting Films and another one.

I'll try to write more on younger kids Tuesday. I think I am coming down with something so I don't think I will post anything tomorrow. I kind of feel like I got run over by a train. Of course, maybe I am just sore because I am too old to do two practices a day any more.
Posted by Dr. AnnMaria at 11:11 PM

Buy instructional videos and study them."

Thanks for your recommendations of what is good and worth pursuing.

Fantastic post....the six have read and its posted on the refrigerator. Thank you.

Just a quick note of thanks, for the wonderful detail that you provided and shared your views on martial arts. It is really useful…

Well, I too have something to shared on martial art supplies, visit my cool website The Mixed Martial Arts Zone or you can also visit our cool directory to add your website in http://www.TheMMAZone.net/op Please Check it out when you have time..