If you don't recognize that saying, you never watched The Princess Bride. Oh well.

Some people may be surprised that our book will have 50 - 80 pages on physical conditioning for judo. (More than half of that is photos.) I'm sure that some people will just skip that section and go to the "judo" part. If they want to just be in shape, learn judo and have something more interesting to do than run on a treadmill, that's perfectly fine.  If they want to be a successful athlete, they've missed the point.

Years ago, a pretty good judo coach said to me,


"You know, Jim Pedro, Sr. really isn't as smart as you think he is. Any six-year-old can figure out if you have two boys wrestle, other things being equal, the stronger boy will win."


"Then we ought to have a six-year-old running our judo development program in this country, because we're NOT winning."

That's pretty much the key point. From what I've seen in California, we have plenty of people who have good judo technique. They're good judo players. They're just not particularly good athletes.

The Olympics are an athletic competition. To win an Olympic event which requires physical effort, you must be in unbelievably good physical condition, better than almost anyone in the world.

I'm surprised I have to explain this to people. It seems obvious, doesn't it? And yet, I have people argue with me about this. They say they ARE in good physical condition. They run miles every week. They exercise regularly. They do push-ups, sit-ups, leg lifts. They lift weights. They can pull up their shirt and show you - they have a six-pack.

Well, guess what, so do I, and I'm a 52-year-old grandmother. The other thing you and I have in common, honey, is that neither of us is going to be winning the Olympics any time soon.

Jim and I come from thousands of miles apart, both literally and figuratively. Most of his life he has focused on teaching and coaching judo, while working as a firefighter. Most of my life, I've focused on statistical analysis and technology, while winning a world championships and coaching. And yet, we reached the exact same conclusion about why one person wins and another loses.

It really is as simple as how much harder some people train. "Intensity" is a word that comes up in our conversations over and over. You can go to judo and you can fight my daughter, Ronda, who, as Kevin Earls, of the New York Athletic Club put it, "Looks lovely, but this young lady is Walking Death". Or, you can go to judo and fight my equally lovely daughter, Julia, who is a 13-year-old purple belt and kind of works out when the mood strikes her.

You may say that is an unfair comparison, but it isn't. For example, our book includes four types of abdominal exercises - bent knee sit-ups, knee-ups, V sit-ups and V sit-twists. Most people do sit-ups. Maybe they do two types. Most days. That's it. The point of adding the additional exercises is to make it harder. Take the V sit-up. You have both arms and legs off the floor as shown below.

Sit up in a V.
Then go back to a starting position.
Do 10 of these without letting your arms or legs touch the floor. 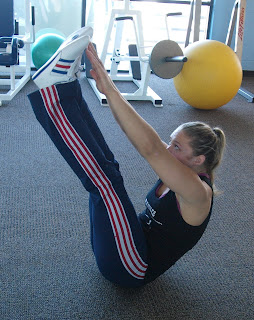 Not all that tough, really. Except this one exercise is part of a circuit. You are going to do 10 of these, then 8-10 of several other exercises. That's one circuit.
Then you repeat the entire circuit two more times.
You time it and each day you try to beat your time.

And that is the difference in intensity and in being an elite athlete versus someone's grandmother. Doing one set of one exercise is not all that hard. Doing all of the repetitions of every set is pretty damn hard. Doing it regularly for years on end and getting better and better and better puts you at the top of the world.

One reason this book is taking so long to get finished is that we are including a lot of pictures. There's a very definite reason for that  - because we KNOW that people often cheat and lie to themselves. They'll do the exercise above and lay back on the floor between each repetition.

"Oh, were you supposed to keep your arms and legs off the floor? I didn't know."

So, for each exercise, we put in pictures and an explanation of how to do it correctly.

We pause here to prevent stupidity ....

It's easy to show how great your athletes are compared to somebody else. You have your athletes regularly do one set of exercises - bench press, barbell curls, bent-knee sit-ups, chin-ups and as many throws as you can do in five minutes (I just randomly picked those). Then, you have visitors come and they do the same routine and they can't do it as fast or as well or as heavy, so, hey, you're amazing and they all suck. This is a stupid comparison I see coaches make all of the time. They don't stop to think that maybe if they did the workout those other people practiced - push-ups, rope-climbing, five two-minute rounds of matwork drills - that they, by comparison would suck.

In fact, there isn't any magic program, although what we have laid out works very well, certainly variation is possible, even recommended and we do talk about that in the book.

What is key is to compare your OWN performance on a weekly, monthly and annual basis. How much more can you lift than a year ago? How much faster can you do your circuits than three months ago? If you can't answer that, why not?

Let me emphasize again, none of this is INSTEAD of your regular judo work outs. This is IN ADDITION TO. I used to have a sign in my room to remind me - if we'd had email back then, I'm sure it would have been in my signature -

What's Ronda advertising on her t-shirt there?

When it comes down to best coach in "strength & conditiong I would have to put my money in the self-motivating individuals of the CDC prison population where their only incentive is to stay alive!I'll let you in on a little secret.

When I was employed by CDC (california department of corrections) as a general construction foreman I was assigned crews of inmates who would work under my supervision and the assigned prison guard & his "baby" (the mini-14gb)and came to the conlusion that these guys had it down to the science!!so after much observation and questions about "rutinas"I have taken a valuable lesson in strength & conditioning and applied it to Judo. mostly all of the "rutinas" (exercises) that I saw in "the yarda"are exercised by my kids and it works, you are right that most kids are invested into the i carly, jonas bros,etc and what not with no positive outcome and instead of working out are glued to the TV,phone with the boyfriend etc. "IT'S TOO MUCH WORK" wahhh.. and not all kids are going to pour their hearts into it... motivation?? well you know that waiver we have to sign at every tournament? they understand it very well... and a little bribing as well ;)

The shirt is from Results Studio in Sherman Oaks. That's where she does her strength and conditioning work outs.

It's a really nice place and serves everybody from elite athletes to older adults wanting to stay in shape and stave off arthritis. They are super nice.

It can be a little hard to find if you don't know that it is on the second floor. I drove past it the first time I went there because I didn't think to look UP

This reminds me of reading Kimura's comments about conditioning.

Keep up the great work Coach !

Great post. But I'm a big supporter of the last comment you make which is that all that hard work is IN ADDITION TO not INSTEAD of mat time.

I was always suspicious of statements about strength and cardio that begin with "all other things being equal". Absurd analogy time... There's a reason a human being can't out-swim a fish. Part of it genetics, but part of it is that for the fish, swimming isn't even work, it's second nature, or just plain nature. If that makes any sense, I'd rather be a fish, than a really fit Olympic swimmer.

I mean Kimura did a thousand push-ups a day, 100 uchimata uchi komi every night at 12:00 before he went to bed, and a lot of other pure conditioning work.

There's a certain amunt of natural talent and physical ability. I'll never win the Olympcs at 52. I think natural ability makes it easier but to an extent, you can compensate by hard work. Next blog topic!

Stephen -
Where did you find the comments on Kimura's conditioning ?

Anna-Marie, probably the easiest to read citation is at http://judoinfo.com/kimura3.htm where it discusses San Bai Ro Rioku among other things.

When reporters questioned Kimura about his big win he told them that winning his first All Japan Title was his most memorable experience. Even the night after the tournament Kimura was again training. He did 500 push ups, bunny hop 1km, and 500 karate chops before he went to bed. He did not sleep well that evening. Rather he kept reliving the moments of his championship match. He was troubled by the fact that he had lost a waza-ari by ken ken Uchimata. He felt this could have easily been ruled ippon in the other fighter's favor. Therefore Kimura concluded that to maintain his title for the next 10 years he would have to train harder than the other judoka. Kimura trained 9 hours a day and did 1000 push-ups compared to 3-4 hours and 300 push ups of his rivals.

Old thread, but I'm talking about old athletes, so there.

There was that 50-year old now-Canadian fencer who won a match in Beijing for Canada, Luan Jejie. She was an Olympic gold medallist for China in '84.

Also, a former international fighter from the 70s has told me that he thinks that some of the stories of massive training coming out of other countries are an effort to get other athletes to wear themselves out by overtraining. There's more than one way to win...

Deliberately disseminate false information about your training methods, that's an interesting thought that never occurred to me.