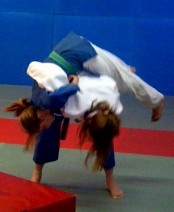 When you're already going over it is a little late to be thinking about what to do.

If you're in this position, you have failed to control the match, that's pretty obvious.

What do I mean by controlling the match? At least four things:

In general, if your opponent wants a fast tempo, you want to slow it down. If she wants to stay standing, you want to be on the mat. Be in control.
Think! If someone gets a left-handed grip on you and starts moving backwards quickly and pulling you towards them - don't you think it's because they want to throw you? What, did you just think it was "Fight Left-Handed Day" ?
I know these seem pretty obvious tips, but I am amazed by the number of times, even at the international level, that I have seen players just let their opponent dominant the match.
Posted by Dr. AnnMaria at 12:07 AM

Gripping. Yes, gripping is something that I really need to work on---I again lost by shidos because of inability to grip, for the most part. Time to do something about it, e.g. by working through the Jimmy Pedro video instead of having it sit on my shelf.

The key to getting your gripping better is to practice and drill it just like you do your throws or mat techniques.

As I always say, you can't wait until the tournament and hope it comes to you.

I think everyone must read this.

I think everyone must read this.