Reasons for and against Uchikomi

I have heard all of the usual arguments against uchikomi , issued in the usual sneering tones. I read Geoff Gleason's books and I liked a lot of his ideas. Some people follow Gleason almost as a cult and they are the ones who believe anyone who does uchikomi is brain dead.

My feelings on those folks was best summed up by the way my friend, Lanny Clark, described one of them,

"He has some good ideas about judo, but he doesn't have ALL of the good ideas, which is what he believes."
If you do jiu-jitsu, wrestling or something else and you've never heard of uchikomi, here is a picture of one type. You can do it with an inner tube, rubber bands or whatever those pulling things Ronda has are called. Uchi komi is Japanese for "winding inside". So, you fit in to your throw and you come back out again.

The second way to do it is at practice with another person who stands there and lets you come in on them usually.

A third way is to do uchi komi with another person moving, and a fourth way is to do it moving with some slight resistance.

I was a black belt and senior national champion when I moved to a new city and ended up at a club where uchikomi was considered along the lines of trying to improve your judo by praying to a piece of bubble gum. My judo got somewhat better while I was at that club. We did a lot of throws on the crash pad (believe it or not, a new innovation back then).

Then, I moved to Los Angeles, to Los Angeles Tenri Dojo, with Jimmy Martin, Miguel Tudela, Steve Seck, Tony Mojica, Blinky (Richard) Elizalde, Gokor Chivichyan , Diane Pierce Tudela, Dawn Beers and a ton of other tough players. We did uchikomi - probably 100 or more every night. My judo got WAY better when I was at Tenri. Honestly, I don't think the uchikomi had anything to do with it. It was having a good coach, good strength trainer and good training partners.

The argument against uchikomi is that it is stupid to go half-way into a throw and that if you practice going half-way in, you will do it that way in a tournament and stop. Maybe if you did thousands of them, but I don't really buy that argument at all.

Look at the photo above. Ronda is doing a weight-lifting exercise called a clean. You bend down and lift the weight straight up to your chest. There is another weight-lifting exercise called the clean and jerk. You do the same thing but on this exercise one leg goes back and you lift the bar over your head. I have NEVER heard anyone say "You shouldn't do cleans if you do the clean and jerk because you'll forget to do the last part at a crucial moment."

The second argument is that no other sport does this. You don't see basketball players run up to the basket and stop. Wrestlers don't do uchikomi. I have not done a poll of all other sports, so I can't really say. I am not sure this argument matters. It makes me think of the movie, Cool Runnings, where the captain of the Jamaican bobsled team is smacking the other guys on their helmets an one asks why he's doing it and he says,

"That's what the Swiss team does, and they win."

to which one teammate replies,

"Yeah, well they make them little pocket knives , too and I don't see you doing that."

To argue that the other teams don't do something like uchikomi is somewhat worse of an argument, to me, than that most people who win in judo, the Japanese players, the world champions that I know, DO do uchi komi. Frankly, I think neither is a particularly good argument.

My opinion? I can see three reasons to do uchikomi, in small amounts: 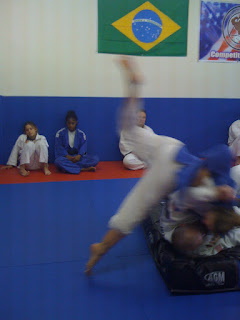 So, for the Gleasonites who want to know why we included a very little uchikomi in our book, that's why. I think small doses can help in certain specific situations, and I have never seen any evidence that it hurts.

Oh, just so you know, you ranting - that doesn't count as evidence.
Posted by Dr. AnnMaria at 1:40 AM

Even the non-uchi-komi believers do uchi-komis but they call them drills or exercises that are broken down into like a zillion uchi komis which makes for a better throw but no matter what judokas call them, ultimately the exercises/drills/"uchi-komis" are done in an effort to do a well exececuted throw, and as long as its sole purpose is for the throw that would be defined as uchi komis would'nt it?

Now I know uchi komi has different meaning to different people and when translating the words uchi komi to english well everone has a different perspective depending upon who and how it was introduced.I'm guessing that the majority of the judo community interprets "uchi komi" as any exercise or drill having to do with a throw but, would it be fair to say that the word uchi komi ("winding inside") is vague? I mean think about it, your in your club and everyone hear's the coach say.. "ok everyone lets "wind inside" so everyone winds into. so the question is.. whats so bad about winding in?

I think the problem isn't as clear as "do or don't do uchikomis". The problem is really in thinking that doing endless static uchikomis is a good practice for randori/shiai. Many clubs just don’t have any perspective on uchikomis.

You can’t start new students on a new throw or even advanced students on a more complicated throw by doing a multi-step sequence of events as a drill. You have to build things and that usually starts with static, then moving uchikomis on the basic skills, then adding more steps and details. This is why you know that uchikomis have their place.

I have visited clubs both as a student and a teacher. I’ve watched as those who use only static uchikomis try to do randori and it’s a display of power and speed, but no flow. Start moving and they have no idea how to attack you because they’ve only practiced against a static partner. I’ve run classes in similar clubs where even the simplest movement-based exercises are foreign and challenging. Perhaps because you have so many good judo clubs in your area, you haven’t visited a “static, make it look beautiful, nevermind its connection to randori” judo club.
Bill Myers

I've been reading your article for a few weeks and I've been enjoying it.

I will say that I'm not a Judo person by trade. I do BJJ. That said, having a Judo black belt as your BJJ instructor and the local uni Judo club training with you pretty regularly provides ample opportunity for cross training which I love.

With that out of the way...I think the issue is resistance. Should you spend your time doing non-resistant drilling or drilling with resistance. That seems to be the key. In BJJ, we have our own "Uchikomi" that we call "drills". One example being the "do 25 Armbars on each side" drill.

I've always heard that each person would need to put in their "required" amount of Armbars in order to get good at them. It might be 100, 500, 1000, and so on. So many students would just plug away and plug away at their Armbars and not getting better or maybe getting marginally better. That's when the realization hit. It's isn't 100, 500, or 1000 Armbars, it's about the same number of Armbar attempts against resistance, regardless of success or failure. This is what makes your Armbars better and what continues to make them better.

As mentioned, it can be utilized for warm-ups and maybe as a workout to improve upon specific muscle groups. However, in order to improve technical ability against a resisting person, you have to train against resistance.

This article may be better at explaining it:

It's BJJ centric but I think any martial artist who is looking to increase their performance and the effectiveness of their drills will get a lot out of it.

Hi Bill -
You're right I have had little experience with static make it beautiful clubs. I can think of a few. Most of those have really been exercise programs for older people and non-competitive youngsters who wanted to move around, stay in shape and not do anything painful. That's not my cup of tea but there's nothing wrong with it. Beats sitting on the couch getting fat. I think for clubs like that uchikomi is probably perfect

This will not really work, I suppose this way.

This will not really work, I suppose this way.

I've been doing uchikomi for ten years; both with a bike innertube and a belt. It really does help build muscle memory. It doesn't help learning how to set up the throw, or feeling the balance of your opponent.
But for the throw itself, it works amazingly well. Might as well do something to improve your fit and throw inbetween class days.

I know this post is a little old, but I've just finished a training session yesterday that was predominantly Uchi Komi (loved it), and felt compelled to contribute.

As a young-at-heart Judo novice, I have to post in favor of Uchikomi drills. After 15 minutes of drilling Tai Otoshi with bands, I did some moving Uchi Komi with my coach, and he noticed a dramatic improvement in both my posture and Tsukuri with the technique.

24 hours after the session, I'm also noticing my chest and arms are feeling a little stiff - that delayed onset stiffness is something I normally attribute to muscle growth (not injury), so the exercise is obviously helping me develop muscles in all the necessary places.

The only caveat I would add is that the Uchi Komi with bands is really only useful when the bands are providing an appropriate amount of tension. Too little and you have no feedback on your technique. Too much, and you struggle to perform the technique at all.

This wasn't really evident to me in a class setting, I felt like I was aimlessly prancing and spinning around for no real benefit, but having had some one on one time with my coach, he was able to critique me a little more closely, and correct the way I was performing it. I now have a new-found respect for Uchi Komi in general.

Thank you for the article...good info.

I'd like to throw (hehe) 2 cents in regarding uchi komi. Shihan Kano mentions in his book that judoka should spend more time practicing tsukuri. Once your tsukuri gets perfect the rest of the throwing process sorts itself out naturally. Uchi komi is basically practicing tsukuri. Can't really argue with the founder can you :)

Apparently Judo was developed by an idiot that knw nothing about sport psychology. Again the dI have a new idea for a book or a magazine article. Nothing more than an attempt
to change institution knowledge and this might also explain why the American Judoka are abysmal at throwing. The same goes for Brazilian judo", not judo but wrestling with some jujitsu technique thrown in. Judo is a sport, but has become a victim of the "new knowledge".