I'm Glad I'm Not Young (It's too damn much work)

So, I've been working on THE BOOK and I'm stuck in the conditioning section, not because it's that hard to write or even that much material but because I have had other completely unrelated projects interfering - for example, I promised to give a talk on uses of statistical software for open data (don't pretend you care).

As I've been writing this section, two things struck me:

When Jim first started writing a lot of coaching articles I was amazed that it was pretty much all of the things I had done when training but he had formalized them. As for me, I  watched the people who were winning international medals and did what they did. (I'm good at detecting patterns, that's why I became a statistician.)

Those people trained super-hard at the beginning of the year, then coasted on the conditioning they had built up and focused on situation drills and randori the weeks before the tournament did better.  They trained all year but they didn't train the same way all year. The people who came in six weeks before the tournament and trained all out could never understand why they didn't win, because they trained so hard.

Unfortunately, because there are always more losers than winners in any sport (only one person gets to win), the people who came in the last six weeks and saw themselves working just as hard or harder than that person who went on to win gold medals came to the conclusion that it was just luck or some other unknown, inexplicable quality that enabled people to win and you couldn't replicate it. I say "unfortunately" because a lot of those people went on to become coaches - after all, they were black belts, won the odd bronze medal here and there or a national championship or two in a pretty weak division.

Actually, hard work explains an enormous amount of the variance in results. (Gee, I feel like I'm writing a statistics article here.) Yes, they did train hard, but you also need to train long. It needs to be a year-long process for years on in. What Jim did was put names to a lot of things successful judo players were already doing and create a replicable system.  And yes, a lot of this draws on books on weight-training and conditioning for other sports. So, for example, you have out-of-season training, pre-season training and in-season training.

I don't think most people really understand how much work goes into being an international medalist. Here, for example is one day of in-season conditioning:

Run two miles. Make it three or four miles if you need to cut weight. (I used to do this on my lunch hour. Since I really had to cut weight for me it was often six to eight miles. But I like to run and I had a very sedentary job as an engineer, so that was actually okay with me.)

Do five or six circuits. (This is what I did first thing in the morning and I hated it. I didn't really mind the circuits as much as the fact that it meant getting up 30 minutes earlier and I hate mornings.)

Listed below is one circuit. You do every exercise in order, without resting. When you get to the end, you start all over with the first exercise. Ready?

You do this five times. If you can do five circuits in under 20 minutes, you add another circuit and do it six times. At the most, it should take you 30 minutes to do five circuits.

If you're not sure what a plyo jump looks like, here is Ronda bossing around (um, excuse me, coaching) her younger sister at the park. Julia is jumping up to the step. 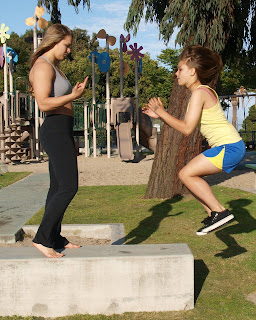 
When people ask me if I am afraid that if we publish all these workouts and drills people will catch up with Ronda or the players Jim is coaching, we always say no, because a) it's too much work so most people won't do it and b) she already has an 11-year head start.

Sometimes I miss being young. Mostly I miss being able to do stuff, like run eight miles along the beach. (Yes, I could, but after having my knee replaced once, I'm never doing THAT again. See post "If a man wants to saw off your leg, tell him no.")  Sometimes I think it would be nice to be able to do all of the techniques I used to do as fast and hard as I used to do them. Sometimes I just think it would be nice not to have gray hair and wrinkles.


Then, I look over workouts like this and remember,


"Damn! Being young was a shit load of work!"

If you don't know what a clap push-up looks like, see below.

Great post. It's all about being able to maintain that amount of training every day for years.

Helps me make sure there's no slacking.

I have a question though. Last month, I would get in some running every day outside the two training sessions on the mat, but I found that sometimes it really took something out of me. Do you think extra mat-time could sometimes be a good substitute for cardio?

I love running (or love suffering through it rather), but I feel its effects when I'm grinding out those last several sets in randori.

IMO it does take time and you can ramp up your training if you want. Also if you are getting beat up try logging your nutrition. A good pre & post workout meal/shake can help a lot in terms of how you FEEL.

Thanks Tom. You're very right: nutrition is hugely important. I've been very careful about it.

The source of my particular problem is perhaps most significantly the lack of sleep (due to the nature of my work as a researcher in academia).

As for everyone, life's been a constant balancing act, and sleep seems to be one of the things that gets sacrificed in the process.

Mat work can definitely be a substitute for cardio (assuming you train hard). I'm running my 7th marathon this weekend and I only run once a week. The rest of my cardio, I get on the mat and in the weight room.

My first triathlon, I blew this guy out on the run after we had been going back and forth on the bike. I had only decided to do this sprint distance event on a whim the week before and had done no training. When the guy asked me at the finish what I focused on most in my training (assuming it had to be the run), he was pretty disheartened to learn that the only cardio I did was judo.

Also, make sleep a priority. That is where you get most of your recovery (and thus growth and development). You can be spot on with your nutrition and exercise and if you are cheating yourself on sleep, you won't realize the full benefits of everything else you are doing.